Brief web-based interventions with high school students can produce big results in their schoolwork and their appreciation of a positive, purposeful mindset, according to new research published in Psychological Science, a journal of the Association for Psychological Science.

“Two interventions, each lasting about 45 minutes and delivered online, raised achievement in a large and diverse group of underperforming students over an academic semester,” wrote Gregory Walton, an assistant professor of psychology at Stanford University, along with his colleagues.

More than a million high school students drop out every year, unprepared for either college or the workforce. Often the cause is underperformance. In the United States, a debate exists over how to raise student achievement, especially among those who struggle in the classroom. Attempts at educational reforms such as teacher training, school restructuring and curricular changes have yielded mixed success and high costs, according to the study. 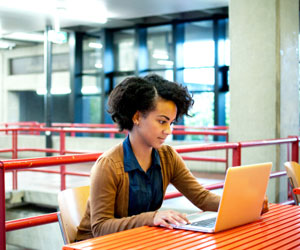 Now, the Stanford researchers say that it may be possible, through brief, online interventions, to improve not only the academic achievement of vast numbers of students but their future lives as well — at extremely affordable costs. The key is the mindset of the students.

In their study, the researchers explored the impact of two types of online interventions on 1,594 students in 13 high schools. One intervention involved the development of a “growth mindset” and the other a “sense of purpose.”

Students with a growth mindset believe that intelligence can be developed, as opposed to those with a “fixed” mindset who believe that people are born with a certain amount of intelligence, the researchers said.

The sense-of-purpose intervention was designed to help students articulate how schoolwork could help them accomplish meaningful life goals.

Both interventions aimed at helping students, especially poor performers, believe they can learn and grow and achieve purpose in life.

The research measured changes in students’ grades in core academic subjects. The results showed that among students at risk for dropping out (one-third of the sample), both interventions raised grade-point-averages and increased the rate at which the students performed satisfactorily in each course by 6.4 percentage points.

Paunesku, a behavioral scientist and lead author on the paper, said, “The findings suggest the possibility that brief, Internet-based activities like the ones we tested could be used to improve learning outcomes for hundreds of thousands or even millions of students around the country at an extremely low cost.”

Paunesku explained that growth mindset interventions help show students that their intelligence can grow when they work hard on challenging tasks. From this view, struggle is an opportunity to learn, not a sign of weakness or failure.

For example, one of the growth mindset exercises had students read an article describing the brain’s ability to grow and even reorganize itself as a consequence of hard work and astute academic strategies. The goal was to tell students they have the potential to become more intelligent through study and practice, and that scholarly setbacks do not indicate limited potential.

Paunesku said, “If our short, web-based activities can help students see school as a place where they can grow their abilities and become the kind of person they want to be, and if that change in perspective makes students more motivated and successful, then it seems likely that there are many opportunities in the classroom to send these messages to better engage students.”

While many studies tout the power of psychological interventions to boost academic performance, few demonstrate how they could be used in a practical sense in real schools, according to the Stanford researchers. Much past research was tested on a one-time basis with far greater researcher involvement and control than would be feasible in a large-scale implementation.

Now, the new Stanford research shows that growth mindset and sense-of-purpose interventions can be scaled to virtually unlimited numbers of students at low cost, Paunesku said.

As for mindset interventions, this area of scholarly inquiry is drawing considerable interest from educational reformers, he said. For example, the White House, research institutions and government agencies are investigating and funding growth mindset research.

The Project for Education Research That Scales – or PERTS, an applied research center at Stanford University — is working toward these goals by engaging with teachers to identify and promote easy-to-replicate practices to help students develop more adaptive mindsets.

“Those practices will be disseminated through mindsetkit.org, which is currently in beta,” said Paunesku, a co-founder of PERTS.

The research was supported by William and Flora Hewlett Foundation Grants 2011-6513 and 2013-8860, by Raikes Foundation Grants 13027 and 227, and by National Science Foundation Research and Evaluation on Education in Science and Engineering (REESE) Program Grant DRL-1247283.

What online interventions were used and how are they accessed?