In two studies, researchers Zhe Wang of Virginia Polytechnic Institute and State University, Stephen Petrill of The Ohio State University, and colleagues found that a moderate level of math anxiety was associated with high math performance among students who reported high math motivation — that is, among students who reported that they valued math and embraced math challenges. For those who are low in this kind of math motivation, however, high math anxiety appears to be linked with low math performance. 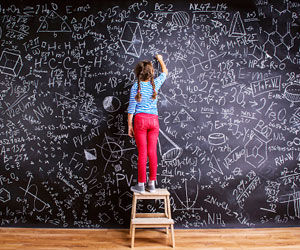 “Our findings show that the negative association between math anxiety and math learning is not universal,” say Wang and Petrill. “Math motivation can be an important buffer to the negative influence of math anxiety.”

While some children might be anxious about math because it is extremely difficult for them and they feel threatened by it, others might be anxious about math because they want to perform well. The researchers hypothesized that different underlying motivations for these two groups may have different consequences for math learning behaviors and performance.

For the first study, the researchers looked at data from 262 pairs of same-sex twins. The children, about 12 years old on average, completed measures of math anxiety and math motivation. They also completed six tasks aimed at measuring math performance, tapping skills like representing numerical quantities nonverbally and spatially, calculating with fluency, and using quantitative reasoning in problem solving.

The results indicated that there were no differences in math anxiety and math motivation according to age, but they did show that girls tended to have higher math anxiety than boys.

“These findings suggest that efforts that simply aim to decrease math-anxiety level may not prove effective for all students,” says Petrill. “Although math anxiety is detrimental to some children in their math learning, motivation may help overcome the detrimental effects of math anxiety.  In particular, for children highly motivated to better learn math moderate level of math anxiety or challenge may actually prove efficacious.”

According to Wang and Petrill, the next step in this line of research will be to examine the real-time physiological changes that underlie the complex relationship between math anxiety and math achievement.