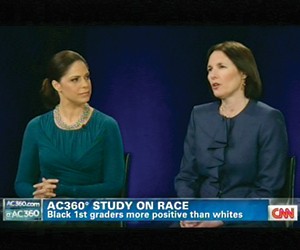 Traditionally, the Public Broadcasting Service (PBS) and the British Broadcasting Corporation (BBC) have been the leaders not only in interviewing psychological scientists as part of their news coverage, but also in actually collaborating with them on stories and documentaries about findings on an array of topics — including memory, motivation, and the origins of morality. Anderson Cooper and his team at CNN’s Anderson Cooper 360° (AC360) are venturing further by collaborating with psychological scientists on actually designing and executing empirical research studies as part of the program’s coverage of current issues in the news.

I was fortunate enough to embark on one of these projects, and it was a fascinating and, ultimately, informative experience. Kerry Rubin, a senior producer at AC360, contacted me in April 2011 about collaborating with her team to conduct a study on children’s racial bias. My initial reaction was one of wariness. Many psychological scientists have been interviewed by the media only to be quoted out of context for a story that sends exactly the wrong message about the phenomenon of interest. After an invited trip to the CNN headquarters in New York City, where my team was asked to “pitch” a story about our research (which included what we study and how we do it), I began to realize that this was something completely different.

The end product was a program titled “Kids on Race: The Hidden Picture,” which aired in 20-minute segments over 5 nights in April 2012. The show was aired  a year after we launched the project in which my research team interviewed 145 children, evenly divided by age (6 and 13 years) and ethnicity (African American and European American) in Maryland, Virginia, and New Jersey, using a protocol we designed to measure children’s implicit racial bias. The videotapes of each child participant were remarkable for their candor and spontaneous reflections about racial attitudes. And watching seasoned interviewers such as Cooper and CNN anchor Soledad O’Brien use items from our protocol for their postassessment interviews was insightful. Their interviews provided long, in-depth discussions with the children about personal experiences of race at school and in their neighborhoods.

In addition, Cooper and O’Brien interviewed a subset of the children’s parents, who watched and then reflected on what their own children had to say about race. Gathering parental reflections about children’s responses to prejudice assessments would be difficult for me as an individual principal investigator, given that we preserve confidentiality and anonymity when we interview children in our research studies; this feature of the show was enlightening, as many of the parents were surprised at their children’s discussion of race and particularly at how their children expected them to be disapproving of cross-race friendships.

Studying the Assignment of Blame

The study that CNN commissioned was designed to assess children’s attributions in peer encounters in which one individual’s intentions towards another child were ambiguous. Consider, for example, a child who is on the ground in front of a swing while another child stands behind it. It’s unclear whether the child behind the swing pushed the other child off to get a turn (“negative intentions”) or was about to help the child get up off the ground (“positive intentions”). Adults and children commonly misattribute blame to someone in situations with this kind of ambiguity. Technically, though, one should withhold blame until “all the evidence is in.” In our task, we used two versions of this scenario: Version A had a White child behind the swing and a Black child on the ground; Version B had the reverse.

We asked all participants what they believed happened in the scenario, whether the two children could be friends, and whether the parents of the potential victim would want them to be friends. The question about “What happened here?” revealed whether children and adolescents attributed negative intentions based solely on the race of the child. The study showed that European American children viewed interracial interactions more negatively than did African American children and that this difference between the two groups, European American and African American, declined by  adolescence.

We also found that school diversity had a positive impact on children’s interpretations of the pictures. A major theory in social psychology is that cross-group friendships reduce prejudice. The study was designed to interview children in schools that varied in racial composition. Thus, children were interviewed in ethnically homogeneous and heterogeneous schools, where contact with outgroup peers varied. What we found was that children and adolescents who had opportunities for cross-race contact were more positive about the interracial encounters than were children without this type of exposure. Children with opportunities for cross-race contact tended to have positive expectations about parental attitudes as well.

We also discovered that favorable feelings about cross-group friendships declined as children grew older. Even though younger European American children had more negative attributions about intentions in the ambiguous encounter than did adolescents, on the whole, younger children from different racial backgrounds expected that the peers depicted in the scenario could be friends afterwards. Unfortunately, adolescents from both racial backgrounds were less likely to think that the interracial pair could be friends following the exchange, suggesting that biases about race manifest differently in early and later childhood.

The project took a year to complete and often involved long days of commuting and travel time. Our major crunch time was in January of 2012, when we interviewed 145 children in 3 weeks. The interviewers were my former doctoral students, Shelby Cooley (now a research scientist in Seattle) and Kelly Lynn Mulvey (now an assistant professor at the University of South Carolina), who had years of interview training. Kelly Lynn and I commuted from Maryland to the New Jersey schools, while Shelby stayed in a New York City hotel and traveled with the CNN crew members to each school site. Our schedule was about four times faster than what we can pull off when we conduct research at our university laboratory; the intensity of the pace of interviewing contributed to the time frame (leaving at 6:00 a.m. to set up at a school and returning to the hotel or home at 7:00 p.m. to log in and label all data files). The CNN infrastructure enabled us to obtain school administrators’ consent much more quickly than we can when we conduct research studies.

One issue that arose with this type of endeavor was the complex balancing act between scientific integrity and journalistic freedom. As a research scientist, it is important to make decisions that preserve the scientific integrity of the process, the data collected, and importantly, the interpretation of the findings for the story narrative. At the same time, scientists working in this type of collaborative context have to recognize the important principle of journalistic freedom. For our show, both parties at times had to explain some of their own decisions that reflected these valued principles. As an illustration, the producer’s team looked for “sensational” quotes from children to excite interest in the viewers; for us, using a “hook” that did not reflect the corpus of data that we had collected undermined the need for a representative sample from which to tell the story, and, from our view, deviated from what we actually found. In general, it is important that both sides make decisions that do not compromise their values. In our case, we were able to reach agreements that preserved both sets of principles through to the final show.

The complete 1-hour story is available as a DVD to schools, educators, and research faculty who have requested it for various teaching, educational, and research purposes. In addition, the CNN team created sidebars on the backstory of the project and posted that content — along with research citations, the methodology, and the data analyses — to the network’s website.

The project was amazing in scope. In 2013, the show won an Emmy Award for Outstanding News Discussion and Analysis, a nice outcome for an in-depth report on the origins of prejudice in childhood. 

For more information on Melanie Killen’s laboratory, visit her website.

Melanie Killen is an APS Fellow and a professor of human development and quantitative methodology at the University of Maryland. She can be contacted at mkillen@umd.edu.