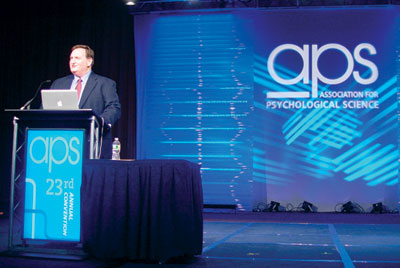 In his Bring the Family Address, Kelly Brownell presented research on America’s diet-related problems and ways to better address them.

With over 60 percent of the United States, population is overweight, according to the latest Gallup-Healthways Well-Being Index; it’s safe to say the traditional medical approach to treating America’s diet-related problems is not working. In light of increasing rates of obesity and diabetes, Kelly Brownell, a psychological scientist at Yale’s Rudd Center for Food Policy and Obesity, says that we must acknowledge this traditional approach as “a failed experiment” and turn to a brand new model for promoting health in the United States.

In his Bring the Family Address at the APS 23rd Annual Convention, Brownell emphasized that problems like obesity and diabetes are typically viewed as problems of individual behavior: We assume that if people had more information about diet and nutrition they would begin to make better choices for themselves. But providing information will never be enough in the context of an environment that, Brownell said, “conspires to make it difficult for people to make changes. If we really want to address the complex — and seemingly intractable — issue of the American diet, we need to start over.”

Brownell has set his sights high, aiming them at the economic and environmental factors that shape what and how much Americans eat. Food marketing is an especially important target for change, because it has, he said, a “pernicious and powerful influence on children.” Research indicates that the average preschooler sees three advertisements for fast food every day, and new types of marketing, including stealth, guerilla, and viral marketing, make it difficult for parents to know what kinds of commercial content their kids are absorbing on a regular basis.

Today, food marketing even extends to the grocery store. It’s no coincidence that cereal is usually placed directly at kids’ eye level in grocery stores, said Brownell, since grocery stores now “make more money selling positions on the shelves than from the food itself.” Marketers know that once a child grabs for a particular box of cereal, there’s a good chance that box will end up in the grocery cart.

While food marketing has changed significantly over the past few decades, so has the food itself. This is especially true when it comes to sugar-sweetened beverages. There is considerably more variety in sugary drinks today than there was just a couple decades ago, and this has led to changes in their consumption. Brownell observed that in the 1970s, people used to drink more milk than soda, but today it’s the other way around. Research indicates that the average American now drinks about 50 gallons of sugar-sweetened beverages every year; for adolescent boys, the figure jumps up to 80 gallons per year.

While beverage companies might like to deflect attention away from sugar-sweetened beverages, those drinks provide the single greatest source of added sugar to Americans’ diets. The real problem with sodas and other sugary drinks, according to Brownell, is that they are completely empty calories. While cheeseburgers may not be good for you, they do provide some nutritional value. Soda, on the other hand brings nothing to the table. Even worse, accumulating research suggests that sugar, including the sugar found in sodas, acts as an addictive substance in the brain.

Scientists often qualify these kinds of findings, highlighting the shortcomings of scientific studies and arguing that more research is needed before definitive conclusions can be drawn. But to Brownell, the evidence is damning. There is a “mile-long list of reasons to take on sugar-sweetened beverages,” he said. 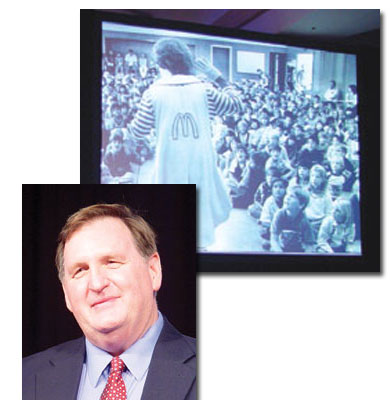 Kelly Brownell’s presentation on changing America’s diet makes you want to put down the popcorn.

The problem of sugary drinks is gradually gaining the attention of policymakers and government officials. In 2009, for example, the New York City Department of Public Health launched a public awareness campaign emphasizing the health impacts of sugar-sweetened beverages with the tag line, “Are you pouring on the pounds?”

Another strategy for reducing Americans’ consumption of sugar-sweetened beverages is through our wallets. Brownell realizes that taxes are never popular policy options, but he argued that there are many persuasive reasons to consider a soda tax. Introducing a tax on sugar-sweetened beverages would generate revenue at a time when local, state, and federal governments are financially strapped. In addition, figures from the Congressional Budget Office suggest that a soda tax could help to reduce healthcare costs by up to $50 billion over ten years. Most importantly, taxes, unlike other prevention and intervention strategies, don’t cost much to implement. Some lawmakers seem to be convinced of the benefits of a soda tax. Legislation to impose a tax on soft drinks has been seriously considered in 17 states and cities, although a soda tax has yet to pass in any city or state.

According to Brownell, effectively addressing diet in America ultimately comes down to framing and storytelling. We need to reframe the issue of diet so that people understand that there are many powerful forces that contribute to health problems in this country beyond the level of individual behavior. Furthermore, we need to be able to tell a compelling story about the specific roles that government and industry play in driving diet-related health outcomes like obesity and diabetes. And we need to be able to show that these issues affect millions of people across the United States in truly profound ways.

This kind of story-telling is an essential component to achieving public policies that effectively address issues like obesity. And it is through effective storytelling, Brownell argued, that “we can all become agents of change.”

“Educating” Americans not to eat and drink so much sugar is like trying to “educate” Skinner’s rats not to press the level that brings the food pellets. Perhaps we need to tax beverages and food by their salt and sugar content.

Dr. Brownell states that “We assume that if people had more information about diet and nutrition they would begin to make better choices for themselves. But providing information will never be enough in the context of an environment that conspires to make it difficult for people to make changes.” I would argue that, while information alone may not be enough for rapid, large-scale changes, it is extremely important. In order for policy makers to begin to talk about the regulatory changes discussed above, the seeds of change must be based on information in the minds of individuals (voters, politicians, policy makers, those who do the “storytelling,” and those who listen to it). Indeed, in some cases, consumers’ desire for changes in products provides a stronger impetus for offering healthy food options than regulatory changes. If we are to start over, we will need to consider information processing and decision making at the level of the individual in addition to wide spread and comprehensive government and industry changes.