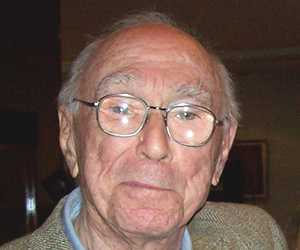 Legendary APS William James Fellow Jerome Bruner passed away at the age of 100 on June 5, 2016. His groundbreaking contributions to cognitive, educational, and perceptual psychology have had transformative effects on the field as a whole, as well as effects on fields such as anthropology, neuroscience, and linguistics. Often considered a founder of the cognitive revolution, many of Bruner’s ideas seem almost intuitive now, but at the time, they challenged the basic principles of scholarship and education. Bruner pushed for teaching children fundamental structure over simple facts and advocated for educating children on any subject material at any stage in development as long as it was taught effectively and with gradually increasing difficulty.

In his seminal research, Bruner established the three modes of knowledge acquisition: enactive or action-based learning, iconic or image-based learning, and symbolic or language-based learning. In contrast to Jean Piaget’s developmental theory, Bruner’s theory allowed for the various stages and types of learning to co-occur, develop simultaneously, and translate into each other rather than denoting rigid chronological time points for the beginning and ending of developmental stages. In 1960, Bruner published The Process of Education, in which he made the principal argument that students are active learners in the education process, constructing their own knowledge as they grow rather than simply being imparted knowledge from teachers and professors. He developed the concept of discovery learning, or the constructivist approach, to explain a student’s active component in the learning process.

Bruner’s research also emphasized the social nature of learning and effectively established the term “scaffolding” in the literature alongside David Wood and Gail Ross. That concept takes into account the social components of the teacher–student environment and explains the fundamental practices of tutoring and teaching.

Finally, Bruner’s research emphasized the importance of language in development and argued that infants are intelligent and active problem solvers with the intellectual abilities of adults, and that by learning language, children can code stimuli and develop a complex and flexible cognition that enables them to develop their understanding of the world around them.

To see a 2013 interview with Jerome Bruner on his legacy as a psychological scientist, visit his “Inside the Psychologist’s Studio” session. And look for a collection of remembrances in an upcoming issue of the Observer.

There is a more than desired widespread assumption of levels, especially in foreign or second language teaching. A large number of instructors, limit their scope within the boundaries of the language level they teach; they don’t dare going beyond that, even indulge in infantilizing their students across the board from grade school to Adult Education. This pedagogical tenet, ” The point doesn’t lie in oversimplifying/watering contents down but in aiming higher for the child to grow…” Too bad I don’t recall the source, but it really sank in and have been my philosophy in creating learning opportunities for my students ever since I started teaching about four decades ago.

Sorry for the lapse in the comment above ; instead of have been….should be: ….has been my philosophy.
Atomistic and mechanistic teaching; if such things could be called teaching has been at best impairing learning let alone undermining/stunting the students’ emotional and intellectual growth, no wonder one of the ultimate goals of education…