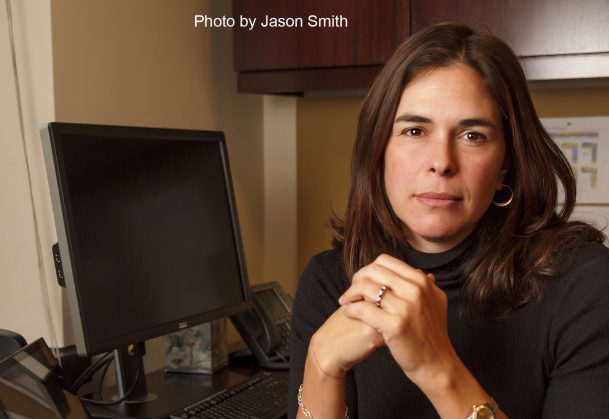 Barnard College has hired APS Fellow Sian L. Beilock as its new president, effective July 1. Beilock, an expert on how people learn and perform at their best, particularly under stress, leaves her post as the Stella M. Rowley Professor of Psychology and an Executive Vice Provost at the University of Chicago.

Beilock was tapped as president of the women’s liberal arts college at Columbia University following a 5-month search process, according to the school’s Board of Trustees. She replaces Debora L. Spar, who left Barnard earlier this year and is now president of Lincoln Center.

“Having spent my career investigating how people can perform at their best, I am thrilled at the prospect of leading a college focused on ensuring women have the tools to succeed in any path they choose,” Beilock says. “Barnard’s unique status as a leading liberal arts college associated with a major research university and its unparalleled urban setting provide important opportunities for supporting high-powered young women to reach their potential and for emphasizing the benefits of a diversity of viewpoints in leadership roles. And there could be no more timely moment to highlight the importance to society of women’s intellectual leadership.”

Beilock, who in 2011 received APS’s Janet Taylor Spence Award for Transformative Early Career Contributions, studies how high-stress situations influence underlying psychological, physical, and neurological mechanisms to compromise performance, even in highly skilled individuals. Her research has focused particularly on girls’ and women’s success in math and science and how performance anxiety can be worsened or alleviated by teachers, parents, and peers. She works extensively with educators and those involved in public policy, including serving on a National Research Council committee on decision-making and stress.

She also is the recipient of the 2017 Troland Award from the National Academy of Sciences. Her work on performance anxiety has resulted in the publication of more than 100 scientific papers and two critically acclaimed books, Choke: What the Secrets of the Brain Reveal About Getting It Right When You Have To and How the Body Knows Its Mind: The Surprising Power of the Physical Environment to Influence How You Think and Feel.

At the University Chicago, Beilock created and launched UChicagoGRAD, a university-wide office and initiative designed to ensure that the university’s graduate students and postdocs develop the necessary skills — from writing and communication to advanced pedagogy — to be leaders in academia, government, industry and the nonprofit sector. She provided details on UChicagoGRAD in a 2017 Guest Presidential Column for the Observer.

Beilock also oversaw the University of Chicago’s integrative efforts to bridge urban scholarship, practice and engagement via meaningful collaborations and innovative programming with Chicago’s Southside neighborhoods and cities around the world. Beilock is also responsible for major academic centers ranging from the university libraries to the University of Chicago Press, academic space planning and allocation, and the development and implementation of several major building projects.

“Her insights into how students clear psychological and social hurdles to achievement have provided valuable lessons for educators across disciplines,” said Jolyne Caruso-Fitzgerald, Chair of Barnard’s Board of Trustees. “Her keen intellect, her empathic concern for student success, and her experience bridging liberal arts disciplines within an urban context make her uniquely qualified to lead Barnard.