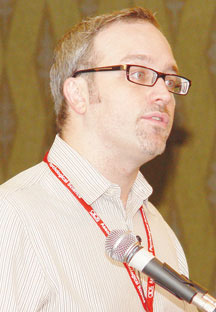 A common way that researchers induce stress in study volunteers is by making them give a speech. In that case, there were plenty of opportunities during the APS 22nd Annual Convention to see the stress response in action, joked Mara Mather of the University of Southern California, during her introduction to the symposium “How Stress Alters Decision Making.” Mather presented an overview of biological responses to stress, especially how stress affects striatal dopaminergic reward systems. In addition to causing physical changes, stress can influence our decisions. The panel of researchers presented behavioral experiments that show how decision making can be altered by stress and anxiety, as well as fMRI data suggesting where in the brain these behaviors may originate.

Stephanie Preston of the University of Michigan argued that “resource decisions,” choices on what critical resources (such as food) to get, keep, and throw away, can be important for survival. Many animals store food to use in times of scarcity, but humans are stockpilers too — individuals routinely keep money in the bank (or under their mattress) and cans in the pantry. However, in some individuals, this collecting behavior is taken to extremes in the form of compulsive hoarding — collecting excessive amounts of objects that have little or no value. Preston found that, across species, including humans, anxiety and threats appear to increase the motivation to acquire and collect food and goods, and further, that the orbital frontal cortex and nucleus accumbens (regions commonly associated with behavioral control and reward seeking), may be involved in hoarding tendencies.

Stress can also affect financial decision making. Anthony Porcelli from Rutgers University presented findings on how acute stress (such as might be created by sticking your hands in ice water) impacts risk-taking. When individuals are making a financial decision, “reflection” often occurs — when faced with a loss, people take riskier options, but when faced with gains, people tend to act more conservatively. However, under conditions of acute stress, this pattern of risk taking is altered. In one experiment, reflective decisions increased under stress, whereas in another, risk taking increased overall. Receiving feedback — did you win or lose money? — can also influence decision making, and there is evidence that decisions made after feedback may be modulated by stress. For example, under acute stress, positive feedback about a prior trial was associated with increased risk-taking behavior on the next decision. In addition, neuroimaging data indicate that stress may influence neural responses to feedback: Responses to positive and negative feedback in the ventral striatum were greatly reduced under stress as compared to when there was no stress, suggesting that stress may dampen your perception of the subjective value of a decision. Men and women respond differently to stress, as discussed by Nichole Lighthall from the University of Southern California. During a risky task in which volunteers could earn a lot of money, but also had the potential to lose everything, men and women took similar amounts of risk in the control condition. However, under stress, men took more risks but women tended to be more conservative.  This gender difference could be moderated by differing responses to stress in the dorsal striatum and anterior insula, two areas also associated with reward-related decision making. During control conditions, women had increased activity in those regions, while men had decreased activity. In the stress condition, the opposite was true, with women showing decreased activity while men had increased activation in those regions.

We make decisions all the time, and many of those decisions are made under stressful conditions: Should we get the surgery, even though it is a very risky procedure? The economy has been unstable — what should we do with our investments? Gaining a better understanding of how stress affects decision making is critical not only for psychological science, but has important, real-world implications.

I work in a Las Vegas casino as a manager. I work with an average of 15 employees a day plus my director and
other department heads.. I am constantly being pulled in multiple directions being asked to do a variety of duties, along with dealing with our customers and trying to keep them happy, I’m finding the stress has been almost unbearable at times and has made me make incorrect decisions more and more often.