Throughout 2015, the Observer is commemorating the silver anniversary of APS’s flagship journal. In addition to research reports, the first issue of Psychological Science, released in January 1990, included four general articles covering specific lines of study. Among those articles was “The Place of Language in Scientific Psychology,” written by the late Princeton University psychology professor George Miller, a major contributor to the birth of psycholinguistics and cognitive psychology in general. In that article, Miller argued that no general theory of psychology is adequate if it doesn’t take language into account.

In the following essay, Gabriella Vigliocco, a psychology professor at University College London, United Kingdom, who studies how language links to knowledge of the world, reviews Miller’s article and provides insights on the direction that language psychology will take in the next 25 years. 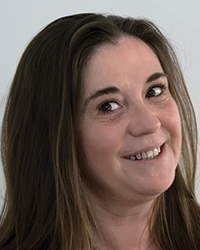 In “The Place of Language in Scientific Psychology,” George Miller argues that “no general theory of psychology will be adequate if it does not take into account language” (p. 7). I fully agree. This claim — as he explains — goes against the prevalent attitude of the founding fathers of cognitive psychology, who would recognize the importance of language but then simply ignore it when investigating the “real stuff” of cognition: for example, concepts and categories of memory. He notes, however, that the field had moved forward between 1951 and 1990 to provide a clear place for psycholinguistics as part of the investigation of cognitive abilities.

Miller describes two desiderata for psycholinguistics — desiderata that can apply to cognitive psychology as a whole: the need to take a more biological approach to the study of language and the need to take a more computational approach. The field has developed both approaches in the past 25 years, although the neurobiology of language has attracted far more attention among psychological scientists than has computational psycholinguistics. Although computational modeling has been successfully introduced as a rigorous way to test theories (especially concerning word processing), the use of this method has been somewhat limited. Computational studies of language have independently developed within engineering and computer sciences in the fields of computational linguistics and natural language processing. Only recently have these disciplines somewhat — and I would argue still only marginally — joined up with psychological studies.

Have contributions from these camps changed the playing field? Yes. An important example involves modularity of language (the view that language is a module that functions in an encapsulated way irrespective of the rest of cognition) and, especially, modularity of syntactic processing (syntax as a reflex), which was a dominant paradigm in psycholinguistics in the 1990s. The finding that just about any linguistic task involves a large number of diverse cortical networks and that Broca’s area of the frontal lobe does more than just syntax — and in fact sometimes is not even engaged in syntactic processing — has helped move the field beyond the assumption of modularity. From computational modeling, important developments in distributional and probabilistic modeling also have contributed to this change by demonstrating how statistical regularities in the environment can go a long way in accounting for many key linguistic behaviors and biases. The probabilistic approaches have been especially useful in providing new perspectives on language development.

Our understanding of how we process spoken words, how we read words, and how we produce them also has greatly benefitted from the insights provided by cognitive neuroscience and computational modeling.

In my own reading of the recent history of the field, I have found that moving beyond issues of modularity and the related issue of innateness has freed researchers to look more closely at how language links to cognition, with growing interest in how language is grounded in more basic cognitive systems (such as sensory-motor systems), how differences among languages (as most dramatically seen in comparisons between spoken and signed languages) may have an impact on the manner in which we perceive and reason about the world, and how the cognitive systems of people who speak more than one language may differ from those of people who are monolingual.

Each of these areas has seen great momentum during the past 20 or so years. The findings that word and sentence comprehension make immediate contact with sensory, affective, and motoric information; that specific properties of languages affect our memory for events; and that bilingual speakers may be protected from dementia strongly reinforce Miller’s conclusion that language simply cannot be ignored in the study of any aspect of cognition.

At the core of Miller’s desiderata lie technological developments: The progress we have made in the past 25 years would not have been possible if technologies such as PET, fMRI, MEG, and TMS had not been developed, along with analytical tools to make sense of the brain data. Likewise, advances in computer science and machine learning have afforded the development of powerful computational tools for the cognitive scientist. Technological development in these areas is still in a steep upward trajectory and can support the next major changes in the fields of psychology and neurobiology of language.

Language has evolved, is learned, and is most often used in face-to-face contexts: dynamic multifaceted environments that include the physical setting, the communication partners, and the wider social setting. In order to render the experimental study of language tractable, we have reduced this inherent complexity (e.g., by studying single words presented on a computer screen). We also have limited our attention predominantly to one channel of communication (speech or text), ignoring the co-occurring visual information provided by the face, hands, and body of the speaker and ignoring the social nature of communication. However, for our research to truly explain the inherent richness of language and to have an impact on human well-being, it is critical for us to take the study of language out of the laboratory and into the rich ecological settings in which such behaviors usually operate.

Such an ecological approach is now possible because of technological advances. For example, we can now record brain and behavioral responses wirelessly, through methods such as mobile eye-tracking and wireless electroencephalography, and we can control the environment (e.g., by using head-mounted display virtual reality systems or through brain imaging of two people communicating with each other). Because of these technological advances, we can take the laboratory out in the real world, or take the real world into the laboratory, in a way that was not possible before. These new technologies, along with impressive advances in genetics, have the potential to create a new psychological science of language within the next 25 years. 

Excellent contribution. This write up has opened new ways of looking the world.

Gabriella Vigliocco is professor of the psychology of language at University College London, United Kingdom. She combines behavioral, neuroscientific, and computational methods to understand the biological and psychological bases of language and communication.