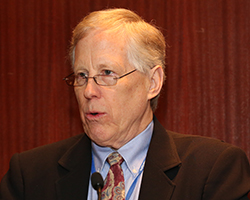 APS Fellow Bruce Cuthbert has been named acting director of the National Institute of Mental Health (NIMH) following the announcement that the agency’s longtime director, Thomas R. Insel, is stepping down. Among other things, Cuthbert has spearheaded the Research Domain Criteria (RDoC) project, an NIMH-led initiative to reframe the study of mental health and psychopathology.

Cuthbert, who previously served as Chief of NIMH’s Adult Psychopathology and Prevention Research Branch and, more recently, as Director of the Division of Adult Translational Research and Treatment Development, received his PhD in clinical psychology from the University of Wisconsin–Madison. His research focuses on developing psychophysiological models and measures of affective processes and, through these models and measures, increasing understanding of mood and anxiety disorders. In particular, he is interested in the high rates of comorbidity found between such disorders and the finding that anxiety more often occurs before depression than vice versa.

During a symposium at the 2015 APS Annual Convention, Cuthbert discussed the urgent need for a diagnostic system more sophisticated than the current standard, the Diagnostic and Statistical Manual of Mental Disorders (DSM), which is based solely on observable symptoms. RDoC, by comparison, draws on systematic neuroscience to study psychopathology from the perspective of cognitive domains and biological features. The symposium was sponsored by the Society for a Science of Clinical Psychology.

“The road to better therapeutics starts with better diagnostics, and that’s where RDoC comes in,” Cuthbert said, adding that the RDoC’s matrix framework, consisting of four quadrants, aims to create a greater degree of freedom to identify patient subgroups and to create more effective and closely tailored treatments and interventions.

Psychological scientists interested in getting involved with the RDoC initiative can find more information on the project here.

100 years of trying and junk results. You have failed. Try this feather weights.