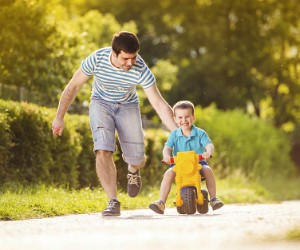 Between juggling responsibilities at home and the office, working parents often report feeling stressed over conflicting demands on their time.

Employees who were part of a new study on reducing work-family conflict reported spending significantly more time with their kids without reducing their number of working hours.

An interdisciplinary team of behavioral researchers carried out the study as part of a larger initiative undertaken by The National Institutes of Health and the Centers for Disease Control and Prevention called the Work, Family and Health Study with the goal of improving the health of workers and their families, while also benefiting employers.

The researchers used an intervention called Support-Transform-Achieve-Results (STAR) that focused on training supervisors at a Fortune 500 IT company to be more supportive of their employees’ personal and family lives.

The STAR intervention’s emphasis on supervisor support and flexibility was expected to help parents better balance their time between work and family, allowing them to spend more time at home without a dip in productivity at work.

Over four months managers and employees attended a series of training sessions emphasizing ways to change the workplace culture to focus on results and concrete goals rather than time spent in the office. Managers were instructed to track their supportive behaviors on a regular basis using a specialized app to help them focus on the value of work productivity, not just face time in the office.

For 8 days in a row, a sample of 93 employees with children responded to daily telephone surveys at the beginning of the study and again 12 months later. During evening telephone calls, parents reported how much time they spent with their child that day.

About half of the parents were in a group receiving the STAR intervention at work, while the other half served as a control group. All of the parents recruited for the study had children between the ages of 9 to 17, with about an equal number of boys and girls.

Importantly, spending more time with children did not mean that parents spent less time working each week. Total hours worked for both groups stayed about the same throughout the study.

“By providing parents with support from managers and flexibility in when and where to complete their work, our results suggest that the STAR intervention opened up opportunities for parents to remain connected to their adolescents,” the researchers write in the journal Pediatrics.

“Important to note is that this study tested the effects of a workplace intervention on quantity but not quality of parent-child time,” the researchers write. “Although more time together brings opportunities for positive parent-child experiences, it does not guarantee them.”

These findings suggest that increasing support for working parents can help prevent conflict between the demands of work and home. The researchers argue that employees who aren’t stressed about conflicts between their various responsibilities can ultimately benefit the business bottom line through more effective and efficient work.