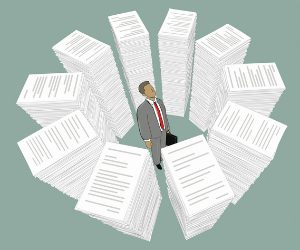 The Oxford English Dictionary credits the psychologist and theologian Wayne E. Oates with coining the term “workaholic.” As Oates outlined in a 1971 book on the subject, “the compulsion or the uncontrollable need to work incessantly” can take on obsessive qualities similar to those of an addiction-related disorder.

“Workaholics scored higher on all the psychiatric symptoms than non-workaholics,” the study authors report in the journal PLoS ONE.

An international team of psychological scientists from Norway, the United Kingdom, and the United States recruited 16,426 adults living in Norway as participants in the study. Links to the research survey were publicly posted in online editions of five Norwegian newspapers. Participants received instant feedback about “personal workaholism score” after completing the survey.

Participants also completed a seven-item work addiction scale. High scores on items like “You deprioritize hobbies, leisure activities, and/or exercise because of your work” and “You work so much that it has negatively influenced your health” were used as indications of workaholism.

In total, around 8% of study participants (around 1,300 people) showed signs of workaholism. Among these individuals, rates of ADHD, OCD, anxiety, and depression were all significantly higher compared to non-workaholics. In addition, among participants who met the criteria for workaholism:

Thus, taking work to the extreme may be a sign of deeper psychological or emotional issues. Whether this reflects overlapping genetic vulnerabilities, disorders leading to workaholism or, conversely, workaholism causing such disorders, remain uncertain,” lead author, Cecilie Schou Andreassen said in a press release.

“Via mobile technology hardware, work is highly accessible to anyone and anywhere, and has the potential to facilitate and enhance workaholism tendencies,” the researchers explain. “However, there has been a perceivable paucity in the number of reliable prevalence estimates of workaholism.”

How can organizations prevent employees from workaholic behaviors? A research team led by Christopher K. Hsee (University of Chicago) designed a series of studies to examine the phenomenon of overearning—when people work when they don’t have to and earn beyond their needs.

“As technologies keep advancing and earning rates keep rising, overearning may also become widespread,” Hsee and colleagues write in a 2013 article published in Psychological Science. “Overearners forgo the pleasure of leisure and endure the pain of extra work.”

Hsee and colleagues also point out that overearning comes with many of the same social costs as workaholism — overearners impose greater pressure to work long hours on their peers, and end up spending less of their time with loved ones. Over a series of experiments, Hsee and colleagues identified a couple of strategies that could be useful in preventing obsessive overearning behaviors.

“Prompting individuals to consider the consequences of their earnings or denying them excessive earnings can disrupt mindless accumulation and enhance happiness,” Hsee and colleagues conclude.