Publications > Observer > Observations > Math Anxiety Is (Literally) in Your Head 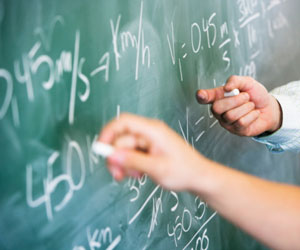 Math can be a fun, logic puzzle for some people. But for others, doing math is a headache-inducing experience. Scientists at the Stanford University School of Medicine have recently shown that people who experience math anxiety may have brains that are wired a little differently from those who don’t, and this difference in brain activity may be what’s making people sweat over equations.

Math anxiety is an under-studied phenomenon, which still lacks formally established diagnostic criteria. Most tests for math anxiety ask people about their emotional responses to situations and problems involving math, and the fact that it is possible for someone to be good at math, but still suffer from math anxiety is often neglected.

Vinod Menon, Stanford University, and his team wanted to find biological evidence for math anxiety. So they used fMRI to scan the brains of second and third graders while they performed math problems. Children who felt panicky about doing math had increased activity in brain regions associated with fear, such as the amygdala, and also in a section of the hippocampus, a brain structure that helps form new memories. Math-specific fear also caused decreased activity in parts of the brain that are involved in problem-solving and information processing, which may have weakened the children’s ability to reason through math problems.

“The same part of the brain that responds to fearful situations, such as seeing a spider or snake, also shows a heightened response in children with high math anxiety,” said Menon in a Stanford University press release. “It’s remarkable that, although the phenomena was first identified over 50 years back, nobody had bothered to ask how math anxiety manifests itself in terms of neural activity.”

Identifying the neurological basis for math anxiety may help to develop new strategies for addressing the problem, such as treatments used for generalized anxiety or phobias. Future research could also provide insight into how the brain’s information-processing capacity is affected by performance anxiety in general. In the mean time though, people who are afraid of fractions or long division will just have to grit their teeth and try their best.

Publications > Observer > Observations > Math Anxiety Is (Literally) in Your Head

This article suddenly opens up my mind, that there is still a lot of students have math anxiety nowadays. This anxiety usually arises because of a bad understanding of mathematics. There are many factors that brings up this anxiety among the students. One of the most affecting factors are the bad method of teaching mathematics, teachers have a big role in this situation. The teachers should bring more fun and interesting method for teaching mathematics, in that way the students can have more interest and understand mathematics easily. The teachers also need to tell the students about the importance of studying mathematics for their future. Parents also took part in this case, their support and motivation are really important. In conclusion, teachers and parents role are really needed to ease this anxiety among the students.