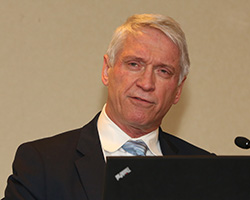 Professional baseball in the United States has seen a dramatic escalation in attention-deficit/hyperactivity disorder (ADHD) diagnoses over the past decade. There are now more than 100 players, about 10% of the active Major League Baseball (MLB) roster, who have clearance to take stimulant drugs for the treatment of ADHD — more than twice the estimated prevalence in the general adult population.

Without a therapeutic use exemption, the powerful stimulants used to treat ADHD are banned from professional sports, including baseball, as performance enhancing drugs. Is ADHD really twice as common in baseball players, or are many of these ballplayers simply gaming the system to gain a pharmacological edge on the field?

“This is a sort of a symbol of what ADHD and stimulants have become in our society,” said APS Fellow Stephen P. Hinshaw (University of California, Berkeley, and University of California, San Francisco) during his address as the recipient of the Society for a Science of Clinical Psychology’s Distinguished Scientist Award at the 2015 APS Annual Convention in New York City. Hinshaw used his address to highlight ADHD as a perfect case study for how cultural and social pressures ultimately exercise as much of an influence on the prevalence and outcomes of psychological diagnoses as do genetic and biochemical etiologies.

Concerns about the recent explosion of ADHD diagnoses and accompanying number of prescriptions have become a lightning rod of controversy. According to the Centers for Disease Control and Prevention (CDC), the percentage of children diagnosed with ADHD has increased by 41% from a decade ago; as of 2011, 11% of American children ages 4–17 had been diagnosed with ADHD.

Like many other mental-health disorders, the symptoms of ADHD fall along a continuum of normal to dysfunctional behaviors. This makes accurately diagnosing ADHD particularly challenging for both clinicians and researchers. The key symptoms of ADHD — inattention, hyperactivity, and impulsivity — are common to all children to some extent, but only kids on the extreme end of this continuum, whose lives are impaired, actually fit the diagnosis.

“These are the kids that blow out the birthday candles, but it wasn’t their birthday party,” Hinshaw joked.

ADHD is difficult to identify not only at the behavioral level, but also at the neural level. Research using functional brain imaging has implicated inefficiencies in the networks and connections of neural systems, particularly connections between frontal and striatal structures in patients diagnosed with ADHD.  Strong evidence implicates delays in maturation of the frontal cortex in ADHD, as well.  However, there is still no scientific consensus on whether the basic neural mechanisms underlying the disorder are motivational, “executive,” or attentional in nature — or some combination.

“There’s a subset of kids [that] genetically has trouble focusing, sitting still, and restraining impulses, and that got revealed when compulsory education in the Western Hemisphere started,” Hinshaw explained. “As culture shifts, those genetic tendencies are revealed.”

Working in collaboration with the health economist Richard Scheffler (University of California, Berkeley), Hinshaw identified legislation and school policies — not biology and genetics — as the major contributors to the surge in ADHD diagnoses in America.

“While the overdiagnosis of ADHD is often portrayed in the media as an affliction of an upper-middle-class white sample not doing well in suburban schools, that diagnosis now has reversed itself, and now it’s the poorest kids and minority kids getting disproportionally diagnosed,” Hinshaw explains.

Looking at a state-by-state comparison, Hinshaw and Scheffler came across an odd finding — rates of ADHD varied enormously by state. Nearly 16% of school-aged children in North Carolina had received an ADHD diagnosis compared with only approximately 6% of kids in California. These regional variations could not be explained by demographic or environmental factors alone, and even after controlling for discrepancies in race and income, kids in North Carolina were nearly twice as likely to receive an ADHD diagnosis as were those in California.

After mapping out rates of ADHD against state-by-state changes in educational policies, Hinshaw and Scheffler, plus colleague Brent Fulton (University of California, Berkeley), found a common thread: consequential accountability laws in public schools. During the 1980s and 1990s, states began reacting to poor public-school performance by enacting laws whereby schools lost funding if standardized test scores weren’t high enough to meet state standards. When the No Child Left Behind Act was passed in 2001, consequential accountability became a nationwide federal requirement. This created a natural experiment that Hinshaw and colleagues used to compare diagnoses and outcomes of kids in states before and after these laws were passed.

They found that after accountability legislation passed, diagnoses of ADHD in kids enrolled in public schools skyrocketed. ADHD diagnoses of kids living at 200% (or below) of the federal poverty level jumped 60% after accountability legislation passed, compared with a 10% increase of ADHD diagnoses in similar kids living in states that already had these laws. There was no such trend in private schools, which are not subject to this type of legislation.

Essentially, these laws incentivized school districts to find ways to bring up standardized test scores by whatever means necessary. One way for underperforming schools to quickly raise test scores was to keep low performers’ scores from being included in district averages to begin with. A diagnosis of ADHD could exempt a low-scoring child from being tested — or being included in the district’s average. A prescription for ADHD medication might also raise the test scores of low-performing children.

“If you’re bringing down your district test scores, accountability laws encourage an ADHD diagnosis,” Hinshaw argues. “Some of these kids probably have ADHD symptoms, but is it really ADHD? You’re not going to figure that out in a 10-minute doctor visit.”  Sadly, such brief evaluations are the norm for diagnosing ADHD these days, with many practitioners ignoring the excellent evidence-based standards published by professional societies.

Unfortunately, the dramatic increase in ADHD diagnoses has done little to alleviate stigma associated with the disorder, particularly for women and girls. Although boys are diagnosed with ADHD much more often than girls, a longitudinal study conducted by Hinshaw found that girls with ADHD suffered from disturbingly high rates of self-harm and suicide attempts compared with boys. These behaviors in girls with ADHD were linked with high rates of rejection from peers. Ultimately, the symptoms of ADHD — rowdiness, fidgeting, impulsivity — are more in line with socially acceptable behavior for boys than for girls. If you’re a girl with ADHD, Hinshaw summarized, peers really don’t like you.

ADHD and its symptoms pose a very real concern for those affected, and Hinshaw emphasizes that medication is only part of the treatment equation. To promote competencies, behavioral and cognitive-behavioral therapy approaches are nearly always needed as well. As social and economic forces have played a role in creating the ADHD explosion, efforts to overcome its risks will require work spanning multiple levels of analysis and intervention.