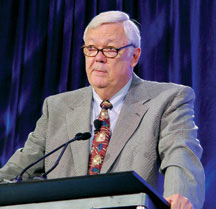 Psychologists should take charge of efforts to reform the failing American education system. That was the bold proposal at the heart of the APS David Myers Distinguished Lecture on the Science and Craft of Teaching Psychology delivered by APS Fellow and Charter Member Ludy T. Benjamin, Jr., Texas A&M University, at the APS 22nd Annual Convention.

“Psychology could do more than the piecemeal work that our discipline has offered to date,” Benjamin said of psychology’s impact on education. “We have considerable talent in our ranks, and this goal is arguably the most worthwhile one we could ever envision.”

Benjamin led up to this argument by reviewing the history of psychology’s relationship to the American education system. In the late 19th century, explained Benjamin, student populations were booming as a result of broader cultural changes such as immigration, urbanization, and compulsory school-attendance laws.

“He was dismayed that psychologists and educators knew so little about the learning process of children,” Benjamin said. “Armed with this new knowledge, education would be based on science.”

The biggest critic of the Child Study Movement was Hugo Münsterberg of Harvard. “This rush toward experimental psychology is an absurdity,” wrote Münsterberg of Hall’s work in a highly visible 1898 article in Atlantic Monthly magazine. “Our laboratory work cannot teach you anything which is of direct use to you in your work as teachers.”

Harvard’s William James also frowned on the Child Study Movement, even though Hall had been James’s first PhD student. “You make a great, a very great mistake, if you think that psychology, being the science of the mind’s laws, is something from which you can deduce definite programs and schemes and methods of instruction for immediate schoolroom use,” said James during the first of a series of talks to teachers, some of which were later published in his Talks to Teachers on Psychology. “Psychology is a science, and teaching is an art, and sciences never generate arts directly out of themselves.”

By most assessments, the Child Study Movement was a failure, said Benjamin. It suffered from a lack of guiding theories and poor data collection, and by 1905 it was largely defunct. But Hall’s work did inspire some importance advances. It led to the emergence of developmental psychology and “served notice that the new scientific psychology could be applied for the public good,” said Benjamin. (Ironically, Münsterberg later abandoned the lab and became the poster boy for applied psychology, writing six books on the topic in nine years.)

Throughout the 20th century, however, few core psychology departments showed an interest in studying education, Benjamin said. Indeed, colleges of education had to start their own psychology units, known mostly as Departments of Educational Psychology.

In concluding his talk, Benjamin argued it was time for this to change. With American public schools failing, and programs like No Child Left Behind largely ignoring substance in favor of test results, now is the perfect time to act, he said. He called on psychologists devoted to education reform to organize nationally, and urged APS to “spearhead that task.”

“We are the science of education,” Benjamin said, summing up his sentiments with the apt phrase, “If not us, then who? If not now, then when?” ♦