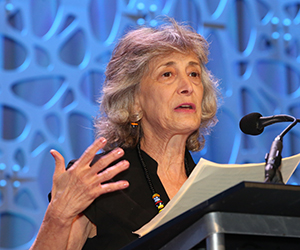 Among the most famous self-control experiments of all-time, the “marshmallow test” conducted several decades ago by APS Past President Walter Mischel offered young children one marshmallow immediately or, if they were capable of delaying gratification, two later. When revisited as adults, the children who had controlled themselves better that day also showed more success on a number of measures, from SAT scores to body mass.

In the time since Mischel’s test, psychological science has learned a great deal about self-control — in particular, how it develops from a very early age. Much of that insight was on display during the Presidential Symposium organized by one of Mischel’s successors, APS President Nancy Eisenberg of Arizona State University, for the 2015 APS Annual Convention. The panel outlined the emergence of self-control networks from the initial months of infancy through the throes of adolescence.

“I believe the research the group will discuss tonight illustrates both the critical importance of regulatory processes to human functioning and also the importance of considering developmental processes when studying regulation,” said Eisenberg.

The Key Role of Good Parents

Developmental psychologist Clancy Blair of New York University explained the role that positive parenting plays in the development of self-control. In a longitudinal study called the Family Life Project, Blair and collaborators have tracked early signs of emotional regulation beginning at 7 months through several follow-up points. The work calls for researchers to observe parent–child interactions at home and collect samples of the stress hormone cortisol, among other measures.

What they have found so far is that cortisol levels in children from more chaotic homes show a sustained elevation. Blair likens the result to a thermostat: It’s as if the heat has been left on all the time in fear of a severe winter storm. Cortisol levels in children from more stable homes, meanwhile, seem to adapt to distinct situations. To continue the metaphor: It’s as if these thermostats can regulate themselves in response to the outside temperature (Blair et al., 2008).

That’s the bad news. Here’s the good: Blair and collaborators have shown that these cortisol levels in children can change in the desired direction as parenting style improves. “I think there are several implications about thinking of self-regulation in this way and fostering child development — particularly for families in poverty,” said Blair, “and [about] the idea that maternal sensitivity and parenting behavior is changeable” (Blair et al., 2011).

APS Fellow Ruth Feldman of Bar-Ilan University in Israel also studies the development of self-control through the lens of mother–infant relations. Feldman’s work has shown that one of the key indicators of healthy regulation is what she calls “synchrony” — the coordination of behavior between parent and child. Achieving behavioral synchrony also seems to put the family’s biology in sync, says Feldman (2007).

“We found that during moments of mother–infant interactive synchrony, there’s also coupling of maternal and infant heart rhythm, coordinated release of oxytocin, and brain-to-brain synchrony in alpha rhythms across the social brain,” she said.

In one study, conducted with Shir Atzil of Northeastern University, Feldman videotaped 23 mothers interacting with their infants, then played the tape to the women when they were inside a brain scanner. Some of the mothers were “synchronous” (their behavior fell into accord with the child) while others were “intrusive” (they either overstimulated the infant or disregarded the child’s signals).

Synchronous mothers showed more activation in an area of the brain known as the nucleus accumbens, which is tied to the reward system, while intrusive mothers showed higher activation in the amygdala, a fear center, the scientists reported in Neuropsychopharmacology (Atzil, Hendler, & Feldman, 2011). By rewarding synchrony, the brain might be alerting the parent that this harmony helps strengthen emotional regulation in the child.

“So the human parental brain, which is the apex of the evolution process, not only builds a more self-regulated and socialized adult,” said Feldman, “it also sensitizes the adult brain to the most important function of evolutionary adaptation, the successful rearing of infants to become collaborative members of the human family.”

The Adolescents Are (Basically) All Right

Casey said the common wisdom that teenagers have no self-control is a bit of an exaggeration.

“Too often, this period is described as if the teen brain has no brakes, no steering wheel, and only an accelerator,” she said, “but the brain is more plastic than it will ever be going forward and is capable of remarkable adaptability in light of the many social, physical, sexual, and intellectual challenges that this developmental phase brings.”

Casey’s neural-circuitry model of the adolescent brain suggests that the point when self-control breaks down is in the heat of the moment when emotional systems of the brain win out over less mature regulatory regions (the prefrontal cortex), rather than in relatively neutral or benign situations (Casey, 2015). She attributes this breakdown to poor communication between regulatory and emotional brain regions due to immature connections between them.

“What I’m suggesting is that it would make sense during this period of development for emotional centers to call a system (prefrontal cortex) that would help regulate emotions and rewire this circuitry, so you no longer need your parent to be your self-regulation and you can ultimately do it on your own,” she said. “That is the purpose of this phase of development — to become relatively independent of the parent.”

In several studies, Casey and others have shown that risky and impulsive behavior in adolescents results, in part, from their heightened sensitivity to rewards, threats, and social influences. This heightened sensitivity was first shown by Adriana Galván (University of California, Los Angeles), who demonstrated that adolescents have more activity in the reward center of the brain (accumbens) than either children or adults do, whereas the control center (prefrontal cortex) is continuing to develop. Simply put, the less mature regulatory areas of the brain can’t keep up with the rapid changes in emotional centers at this point in life (Galván et al., 2006).

“Adolescence is usually described as a roller coaster ride of all thrills, but actually adolescents experience thrills and real fears,” said Casey. “And it’s important for them to have these experiences and opportunities to regulate their emotions on their own and rewire the brain in preparation for the challenges of adulthood.”

Casey also stated that some individuals may have more difficulty with self-control than others during this period. Together with Mischel and others, she followed up with the original participants in the marshmallow test some 40 years later. Casey found that those individuals who could not stop themselves in order to enjoy two marshmallows later when they were children also had difficulty stopping themselves in response to alluring cues as adults. Using brain imaging, she found that the same region that shows elevated activity in response to rewards during adolescence distinguished the adults who as children could not wait to get two marshmallows (Casey et al., 2011).

Together, these findings suggest that teens who had difficulty delaying gratification as children may be especially vulnerable to breakdowns in self-control.

Five Things Teenagers Can Do About It

Not all hope is lost. Angela Duckworth of the University of Pennsylvania outlined a five-part “process model” (borrowed from emotion researcher and APS Fellow James Gross of Stanford University) that she believes offers a blueprint for teenagers and young adults to keep their impulses in check. The sooner some of these strategies are employed, the better the outcome in terms of self-control.

“It is by intervening in the process of impulse-generation earlier rather than later that we can be really smart about how to exercise self-control in our lives,” she said.

The first step in the model is called situation selection. That refers to putting yourself in a position to succeed — making a rule of sitting in the first row of a lecture, for instance, or locking yourself in a room without a phone when it’s time to study. The second step, if you can’t select a situation, is to modify it. If you have to bring a laptop to class, for instance, close it while the teacher is talking so you can’t browse eBay or post to Facebook.

In a 1-week field study with high school students, Duckworth and collaborators found that those who used situation-modification strategies accomplished more stated goals than did those students who used a more basic self-control method (simple willpower) or no strategy at all. And in addition to refraining from outside temptation, said Duckworth, the modification students reported actually feeling less temptation.

The third part of the process model preaches “selective attention” — looking right at a teacher rather than out the window, as students in KIPP charter schools do, for example. (In the marshmallow test, some youngsters employed this tactic by looking away from the treat in question.) The fourth strategy is to reframe a situation; as one example, a study conducted in collaboration with Mischel showed that fifth graders had an easier time regulating a lingering negative emotion when they replayed the event in the third rather than the first person, as if watching it happen to someone else.

The fifth and final approach is “response modulation,” which Duckworth described as “just good old-fashioned ‘don’t do it.’”

Regulation among children, adolescents, and young adults might be an uphill battle, but it isn’t a lost cause. Duckworth ended the symposium with a quote from Walter Mischel: “The most important scientific discovery about self-control is that it can be taught.”