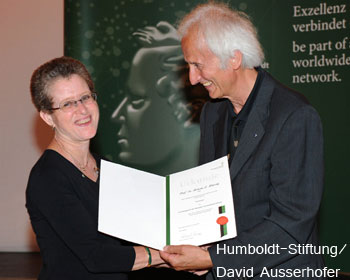 Roberta Klatzky has spent much of her career getting to know robots. Thanks to the Humboldt Research Award, Klatzky, who serves as APS Treasurer, got to experience a new aspect of robotics during her stay at the Institute of Automatic Control Engineering (LSR) at the Technical University of Munich in Germany.

Klatzky, a professor of psychology and human-computer interaction at Carnegie Mellon University, studies human perceptions and cognition with an emphasis on haptic perception and spatial cognition. She is interested in designing robots that can respond to humans in a way that is convincing and personal. Her work has implications for haptic interfaces, navigation aids for the blind, and exploratory robots.

“Having the opportunity to reside in an Institute dedicated to issues of robot control was really enlightening,” Klatzky says. “I can proudly claim that not only have I socialized with a robot by shaking its hand, but we’ve danced together! So far, you’d never mistake a robot for a human when dancing in a dark bar, but you’d be surprised how effective these interactions can be.”

While in Munich, Klatzky collaborated with Angelika Peer, Raphaela Groten, and Daniela Feth on a paper “that describes how two people can collaboratively steer an object by communicating their intentions through haptics.”

“It was a wonderful experience personally and professionally,” Klatzky says. “I’m very grateful to the von Humboldt Foundation for facilitating my visit.”