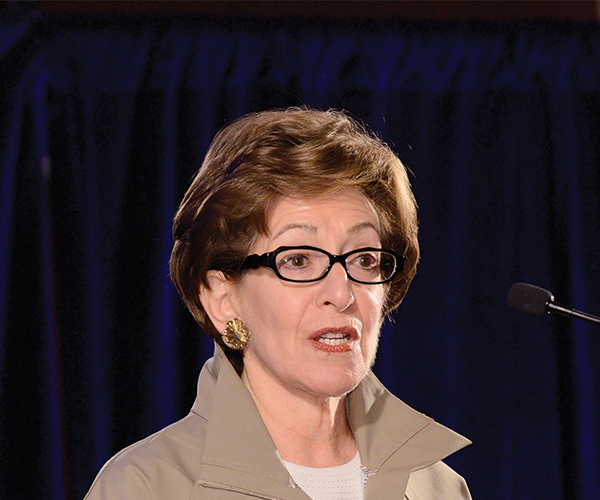 Ellen Frank’s journey as a psychological scientist started unexpectedly in 1974 when she was hosting a talk show on women’s issues for a local Pittsburgh television station.

Shortly after Anderson appeared as a guest on her show, Frank was recruited by Kupfer and Detre as their new research assistant.

“At the end of each meeting with them, I kept asking these questions,” Frank said during her APS James McKeen Cattell Award Address at the 2015 APS Annual Convention, “and finally I think just to shut me up, they gave me a bunch of data they had brought from New Haven to see what I could make of it.” It wasn’t long before Frank was analyzing her own data sets, publishing papers, and presenting her findings at conferences.

That research assistant job propelled Frank into a distinguished career studying how to bring relief to the millions of people suffering from mood disorders, including bipolar disorder and depression. Recognized for groundbreaking contributions to the scientific understanding and treatment of these conditions, Frank has spent years researching better, more effective, and longer-lasting treatments for individuals affected by mood disorders.

A Mission on Remissions

At the dawn of Frank’s career, the conceptualization of mood disorders was quite different than it is today: Bipolar disorder was thought of as a lifelong condition with recurrences throughout the patient’s life, while unipolar depression was seen as occurring in one-off episodes. The recurrent nature of unipolar depression was largely ignored. As a result, many patients continued to suffer from repeated episodes of severe depression throughout their lives.

Frank was determined to find a better way to help these patients maintain longer remissions. As part of her early research on mood disorders, she ran a clinical trial to determine how successful different combinations of pharmacotherapy and psychotherapy were at preventing depression over the long-term.

She came upon a promising finding that later would revolutionize the treatment of mood disorders: Positive changes to patients’ interpersonal dynamics had remarkable protective effects against the recurrence of depression.

Interpersonal psychotherapy (IPT) is a talk therapy treatment based on the principle that mood and mental health are closely tied to the way people interact and communicate with those around them. By gaining control of social stressors, patients can take steps to improve their moods. While traditional forms of psychotherapy popular at the time required patients to meet with a therapist five times a week for years, IPT was a time-limited treatment that typically lasted between 12 and 16 weeks.

Frank found that even monthly sessions of IPT could be enormously successful in helping patients maintain impressively long-lasting remissions.

An analysis of audiotapes of patients’ therapy sessions revealed that patients who were able to focus on the strategies and tactics of IPT, which helped them resolve chronic interpersonal difficulties, also had excellent rates of remission — almost as good as those produced by medication.

Frank hypothesized that IPT alone could play a role in the treatment of severe, recurrent depression for patients who were unable to consistently take medication. In a study on women of child-bearing age — who might want to avoid medication that could be harmful during pregnancy — Frank found that a clear majority of the women with highly recurrent depression who could achieve remission with IPT alone could maintain that remission with monthly sessions of IPT. Those who required the combination of IPT and medication to get to remission, however, generally needed to continue the medication to remain well.

However, Frank still was troubled by the dismal rates of long-term remission in bipolar patients: Nearly half of patients were ill again within 2 years, even with adequate treatments.

“We really need to do something about this disorder,” Frank said. “We need to take a different approach.”

All in the Routine

When Frank looked at the onset of patients’ bipolar episodes, she found that interruptions to one’s social routines often preceded an episode of either mania or depression.

“What we saw was, to no surprise, that severely stressful life events were much more common in the pre-onset period than in a control period when no new episode had occurred,” she explained. “But what was really striking was the extent to which routine-disrupting events were present in that pre-onset period, particularly for individuals who experienced episodes of mania.”

Clearly, social routines were deeply intertwined with the genetic and biological underpinnings of bipolar disorder.

In the world of chronobiology, “zeitgeber” (German for “time giver” or “synchronizer”) is a term for an external cue that influences the timing of the body’s internal biological clock (for example, natural light alerts us to the time of day). Early research by the physiologist Jürgen Aschoff determined that social cues (e.g., meal times or work schedules) can also act as zeitgebers, much the way that light or other external cues do.

Frank hypothesized that these “social zeitgebers” could influence changes in interpersonal stability and routines, which in turn could trigger a downward spiral in mood and subsequent bipolar episodes.

Major changes to social routines — like getting married or going through a break-up — could lead to disruptive shifts in biological rhythms and, in turn, in mood, much like jet lag.

“These changes in social prompts lead to changes in the stability of social rhythms, and those then lead to a change in the stability of our endogenous biological rhythms. This leads to a change in somatic symptoms,” Frank explained. “This change in somatic symptoms is a perfectly normal one, but individuals vulnerable to mood disorders get stuck in a pathological entrainment of biological rhythms that we label as episodes of mania or depression.”

Using “every trick in the behavioral therapist’s book,” Frank designed a new intervention to prompt patients to maintain regular routines. The key elements of this new Interpersonal and Social Rhythm Therapy (IPSRT) focused on the link between mood and the regularity of social routines using a self-monitoring metric.

“By designing a treatment that focused on the interpersonal aspects of patients’ lives and capacity to maintain really regular social rhythms in the face of disruptions, we could increase both social and biological stability,” she said.

IPSRT was successful: Patients with bipolar I disorder who received 12–18 weeks of the new therapy as part of their acute treatment generally remained well over the course of the 2-year follow-up.

“What was really satisfying to us was that the more patients were able to increase the regularity of their social routines in the acute phase, the longer they remained well in the maintenance phase,” Frank explained, because this result suggested that their theory of what is curative or protective in bipolar disorder had some validity.

Continuing her effort to relieve the burden of mood disorders, Frank ran an innovative two-site study with a team in Pisa, Italy. Together, they have developed a series of assessment instruments for evaluating and effectively bringing relief to a set of patients suffering from subsyndromal hypomania, anxiety, and eating disorders in addition to their depression — conditions wherein patients’ symptoms are not severe enough for diagnosis as a clinically recognized syndrome.

Frank also is working on new projects that will make it easier for clinicians to get the training to deliver the most effective therapies. As part of an experiment in e-learning for community health providers, Frank showed that clinicians can learn just as effectively in an online classroom as during a traditional 2-day face-to-face conference training.

In addition, the proliferation of smartphones may allow patients to directly monitor and participate in their own treatments. Frank is in the process of developing a smartphone app for self-management of mood disorders, capitalizing on what the phone can sense (e.g., a phone’s microphone and accelerometer can monitor sleep patterns) as well as what the patient can record to provide feedback and clinical interaction outside of typical therapeutic settings. Through a specialized app, patients can easily track their own daily social routines, levels of activity, socialization, and mood. They also can monitor whether they have positive or negative outcomes to these patterns over time.

From talk shows to cutting-edge treatments, Frank’s 35-year journey has consistently focused on improving the lives of the people in her community.

This article hits the nail on the head. Although just sticking to a routine isn’t always enough to overcome mood disorders on its own, it can definitely help. My father has had some run-ins with depression, but he says the way he gets through it is pressing on and doing what he always does. Comparatively, much like Ellen Frank found, his depression always seemed to get worse when his routines were changed somehow. Thank you for the article; it was very informative.

I have 2 questions rather than comments.
How does Dr Frank’s treatment help with ruminating , obsessive thoughts? If these are considered as symptoms of OCD can they also be part of a diagnosis of bipolar disease and treated by the social regulations adjustments suggested in IPSRT?

A sample of research on posttraumatic stress disorder and patient progress in psychotherapy.