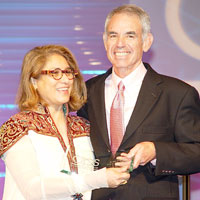 Get smarter fast! This message sounds like the tagline of a late-night infomercial. But when it comes from the mouth of cognitive psychologist John Jonides of the University of Michigan, it carries more weight. In his William James Fellow Award address at the 2011 APS Convention, Jonides described how proper training can increase an individual’s intelligence.

“Fluid intelligence is often thought to be highly heritable, and some people draw the conclusion that it is immutable,” said Jonides. “I hope to disabuse you of that idea today.”

That question drove Jonides to teach people a working memory task known as the “n-back.” A typical n-back might include a series of black squares dotted with white marks in different corners. In a “one-back” task, a person must identify when a particular square is repeated one square later. (If a white dot appears in the lower-left corner of the black square in Image 3, then again in Image 4, the person would recognize this series as a positive one-back.) As the training progresses, the amount of space between repeated items increases. So a person who masters the one-back task will move on to the two-back, then the three-back, four-back, and so on.

In new research published in Proceedings of the National Academy of Sciences one month after his address, Jonides and his collaborators tested children for fluid intelligence and trained some of them with the n-back task. (For this research, the n-back task was converted into video game format, so the children, who had an average age of 9, would not get bored.) After the training, the researchers measured fluid intelligence again and then brought the children back three months later for one final intelligence exam.

The children who did well in the n-back training improved their fluid intelligence scores, Jonides reported, and this improvement was maintained three months later, even with no additional training. These children also scored better than did those who received training that didn’t exercise their working memory.

The results suggest that working memory tasks can directly strengthen a person’s intelligence, similar to the way that a drug helps the body fight an ailment. The findings “heartened us about the possibility of being able to improve fluid intelligence in much the same way that pharmacological agents might be used to improve some pathological condition,” Jonides said.

More recently, Jonides has used imaging technology to understand what parts of the brain are responding to tasks like the n-back. In one study, researchers measured blood flow to the brains of participants performing the n-back, and then took another set of measurements after a week of training. What they found was a reduction in blood flow to brain areas that are necessary for completing the task — evidence that these regions had become more efficient and therefore “require less blood flow during task processing,” Jonides said. At the same time, they saw increased blood flow in these brain regions when the person was at rest in the scanner.

This data led Jonides to compare the brain to a muscle that can be trained. After all, if a person can grow new striated muscle as a function of training, they will have increased blood profusion to the muscle even when they’re resting. Though the muscle analogy is not perfect — the finding about decreased blood flow during the task goes against what occurs with exercised muscles — what is clear is that a person can improve fluid intelligence by training working memory.

“Even if these cognitive skills are highly heritable, and by some estimates they are, that doesn’t mean they’re not changeable,” Jonides concluded. “There can be influences of the environment that can improve such things as fluid intelligence.”