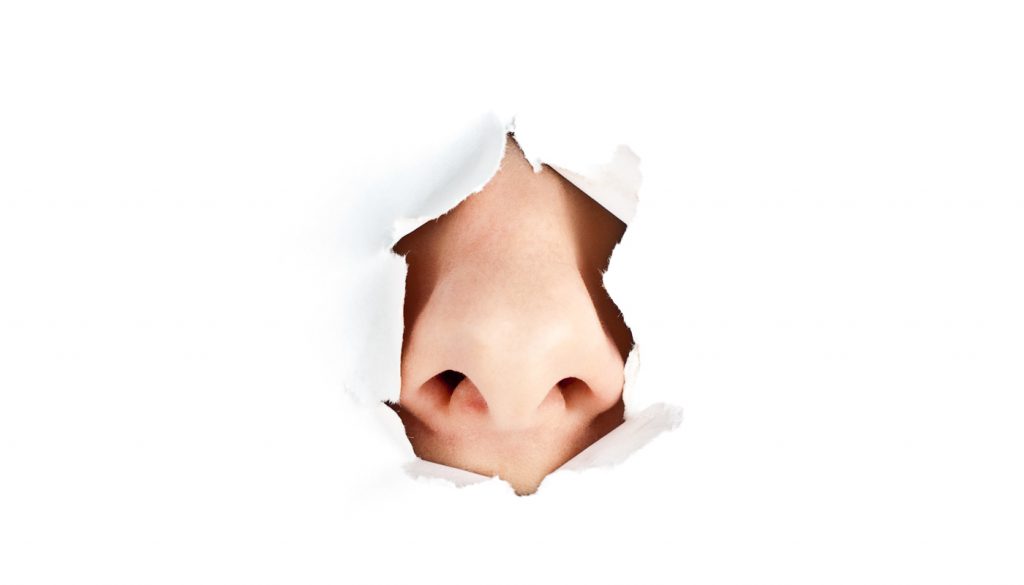 Many animal species transmit information via chemical signals, but the extent to which these chemosignals play a role in human communication is unclear. In a new study published in Psychological Science, a journal of the Association for Psychological Science, researcher Gün Semin and colleagues from Utrecht University in the Netherlands investigate whether we humans might actually be able to communicate our emotional states to each other through chemical signals.

Existing research suggests that emotional expressions are multi-taskers, serving more than one function. Fear signals, for example, not only help to warn others about environmental danger, they are also associated with behaviors that confer a survival advantage through sensory acquisition. Research has shown that taking on a fearful expression (i.e., opening the eyes) leads us to breathe in more through our noses, enhances our perception, and accelerates our eye movements so that we can spot potentially dangerous targets more quickly. Disgust signals, on the other hand, warn others to avoid potentially noxious chemicals and are associated with sensory rejection, causing us to lower our eyebrows and wrinkle our noses.

Semin and colleagues wanted to build on this research to examine the role of chemosignals in social communication. They hypothesized that chemicals in bodily secretions, such as sweat, would activate similar processes in both the sender and receiver, establishing an emotional synchrony of sorts. Specifically, people who inhaled chemosignals associated with fear would themselves make a fear expression and show signs of sensory acquisition, while people who inhaled chemosignals associated with disgust would make an expression of disgust and show signs of sensory rejection.

To test these hypotheses, experimenters collected sweat from men while they watched either a fear-inducing or a disgust-inducing movie. The men followed a strict protocol to avoid possible contamination. For two days prior to the collection, they were not allowed to smoke, engage in excessive exercise, or consume odorous food or alcohol. They were also instructed to use scent-free personal-care products and detergents provided by the experimenter.

Women were then exposed to the sweat samples while performing a visual search task. Their facial expressions were recorded and their eye movements were tracked as they completed the task.

The researchers also found that exposure to fear and disgust sweat altered the women’s perceptions during the visual search task and affected their sniffing and eye-scanning behaviors in accordance with either sensory acquisition or sensory rejection. Importantly, the women were not aware of these effects and there was no relationship between the effects observed and how pleasant or intense the women judged the stimuli to be.

These findings are important, Semin and colleagues argue, because they contradict the common assumption that human communication occurs exclusively through language and visual cues.

Rather, the findings provide support for the embodied social-communication model, suggesting that chemosignals act as a medium through which people can be “emotionally synchronized” outside of conscious awareness.

The researchers acknowledge that these effects could very well contribute to the kind of emotional contagion that is often observed in situations involving dense crowds.

The study was co-authored by Jasper H. B. de Groot, Monique A. M. Smeets, Annemarie Kaldewaij, and Maarten J. A. Duijndam of the University of Utrecht.

This research was supported by a grant from Neuroscience and Cognition Utrecht (NCU).

The hypothesis is that chemicals in bodily secretions, such as sweat, would activate similar processes in both the sender and receiver, establishing an emotional synchrony of sorts. So, the scientists expected to happen to people who smelled chemo signals of fear made their own expression of fear.

Great info … I’d like to take it a step further. It seems those with specific traumas can pick up quickly if other people have suffered similarly (if they are empathetic or “in tune” enough)
I’ve noticed people doing this who are strangers –
I wonder if when certain thoughts or memories are touched on in conversation if a scent is produced and the other unknowingly pucks up on it and the sympathy that is expressed opens the communication regarding the shared trauma – it’s happened too many times in my own circumstances as the person who picks up the others information, for it to be coincidence…