The study suggests that “gamifying” a scientifically-supported intervention could offer measurable mental health and behavioral benefits for people with relatively high levels of anxiety. 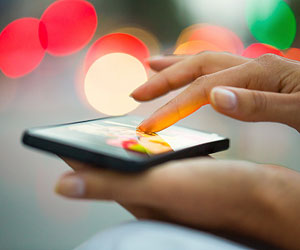 “Given this concerning disparity between need and accessibility of services, it is crucial for psychological researchers to develop alternative treatment delivery systems that are more affordable, accessible, and engaging.”

That’s where the mobile app comes in.

The game is based on an emerging cognitive treatment for anxiety called attention-bias modification training (ABMT). Essentially, this treatment involves training patients to ignore a threatening stimulus (such as an angry face) and to focus instead on a non-threatening stimulus (such as a neutral or happy face). This type of training has been shown to reduce anxiety and stress among people suffering from high anxiety.

In the study, about 75 participants — who all scored relatively high on an anxiety survey — were required to follow two characters around on the screen, tracing their paths as quickly and accurately as possible.

After playing the game for either 25 or 45 minutes, the participants were asked to give a short speech to the researchers while being recorded on video — an especially stressful situation for these participants.

The videos revealed that participants who played the ABMT-based version of the game showed less nervous behavior and speech during their talk and reported less negative feelings afterward than those in the placebo group.

“Even the ‘short dosage’ of the app — about 25 minutes — had potent effects on anxiety and stress measured in the lab,” explains Dennis, who co-authored the study with Laura O’Toole of The City University of New York. “This is good news in terms of the potential to translate these technologies into mobile app format because use of apps tends to be brief and ‘on the go.’”

The researchers are currently investigating whether even shorter stints of play – similar to how we normally play other smartphone games — would have the same anxiety-reducing effect.

“We’re examining whether use of the app in brief 10-minute sessions over the course of a month successfully reduces stress and promotes positive birth outcomes in moderately anxious pregnant women,” Dennis says.

While it’s unclear whether this app would produce mental health benefits in those with clinically-diagnosed anxiety, it does present a compelling case for gamified ABMT acting as a “cognitive vaccine” against anxiety and stress. The researchers believe that apps could eventually be developed to assist in the treatment for other mental health disorders, such as depression or addiction.

“Gamifying psychological interventions successfully could revolutionize how we treat mental illness and how we view our own mental health. Our hope is to develop highly accessible and engaging evidence-based mobile intervention strategies that can be used in conjunction with traditional therapy or that can be ‘self-curated’ by the individual as personal tools to promote mental wellness,” Dennis concludes.

Can this app be downloaded from anywhere?

Why didn’t anyone mention what the app *IS*?