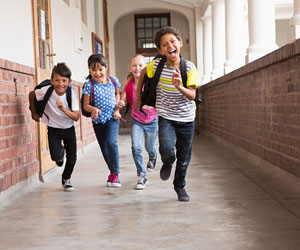 “This research is valuable to the scientific community as it bridges genetic and environmental factors and helps to illustrate one possible route to ADHD. Further, it demonstrates the potential to ultimately prevent conditions like ADHD by understanding how genes and environmental exposures combine,” says lead researcher Joel Nigg, professor of psychiatry and behavioral neuroscience at the OHSU School of Medicine.

To conduct this research, Nigg and colleagues evaluated lead blood level in 386 healthy children aged 6 to 17. Half of the children had been carefully diagnosed with ADHD. All children were within the safe lead exposure range as defined by the Centers for Disease Control and Prevention, and the blood lead level in the sample was typical of the national U.S. population of children.

The analysis showed a heightened association between lead exposure and ADHD symptoms — particularly hyperactivity-impulsivity — in those with the HFE C282Y gene mutation, present in approximately 10 percent of US children.

“Because the C282Y gene helps to control the effects of lead in the body and the mutation was spread randomly in the children, the findings of our study are difficult to explain unless lead is, in fact, part of the cause of ADHD, not just an association,” explained Nigg.

The study also found that lead effects were more robust in males, which is consistent with previous research specific to neurodevelopmental conditions and gender. Children without HFE C282Y mutations showed amplified symptoms as lead exposure increased, but not as consistently.

The scientists do not purport that lead is the only cause of ADHD symptoms, nor does the research indicate that lead exposure will guarantee an ADHD diagnosis; rather, the study demonstrates that environmental pollutants, such as lead, do play a role in the explanation of ADHD.

Despite U.S. government regulations that drastically reduced environmental exposure to lead, the neurotoxin is still found in common objects such as children’s toys and costume jewelry, and continues to be ingested in small amounts via water from aging pipes, as well as contaminated soil and dust.

“Our findings put scientists one step closer to understanding this complex disorder so that we may provide better clinical diagnoses and treatment options and, eventually, learn to prevent it,” says Nigg.

Co-authors on the research include Alexis L. Elmore of the University of Iowa, Neil Natarajan of Oregon Health & Science University, and Karen H. Friderici and Molly A. Nikolas of Michigan State University.

As a resident and victim in the Flint Water Crisis. I am an observation guest teacher in our school. There are concerns in studying behavior issues in African American culture in Flint. We must have a conversation. Dr. Joyce Ellis McNeal.