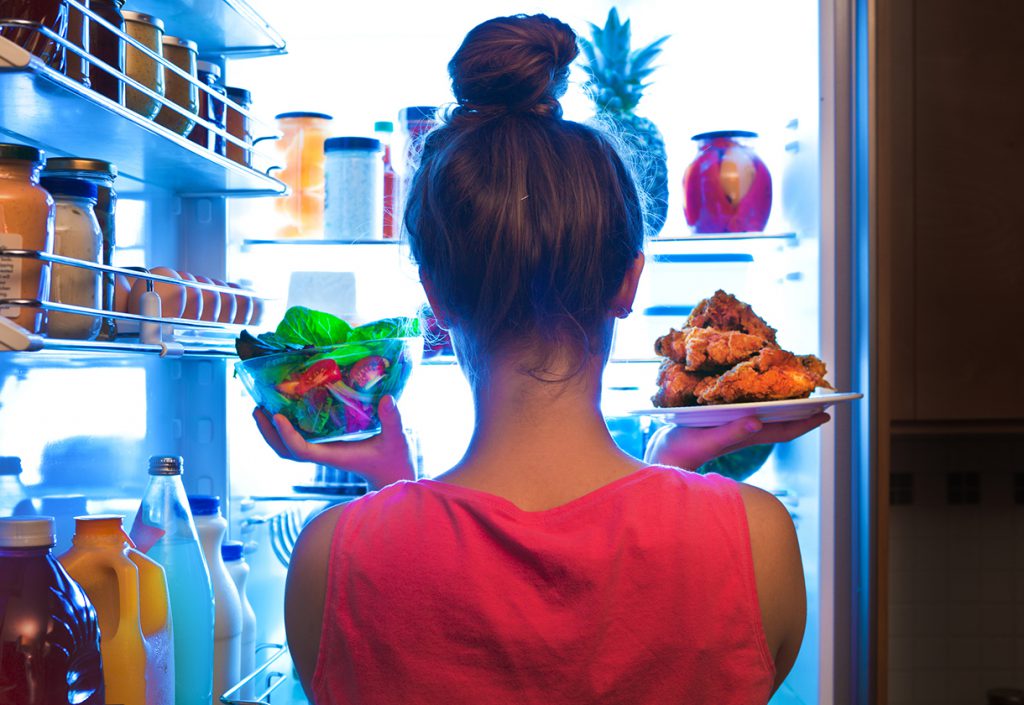 The research specifically focuses on “approach-avoidance” training in which participants learn to approach some targets (e.g., nutritious foods) and avoid other ones (e.g., junk foods). Repeated exposure to these pairings is supposed to reinforce their mental associations in ways that increase positive behaviors and reduce negative behaviors. However, studies have not consistently shown an effect of this type of training.

Psychological scientist Pieter Van Dessel and colleagues hypothesized that this training may work when it actually alters people’s beliefs about the consequences that follow when they approach or avoid certain foods.

“Our findings show that targeting these adaptive inferences can be effective in changing unhealthy eating behavior,” says Van Dessel, a researcher at Ghent University. “This is important because it is often difficult to change these types of automatic behavior.”

Van Dessel and coauthors Sean Hughes and Jan De Houwer tested their hypothesis in three online studies and one lab-based study, with a combined total of 1,547 participants. In all four studies, the participants completed a series of computer-based trials in which they saw a digital avatar standing near an open refrigerator. In each trial, the refrigerator contained a particular food and a color cue indicated whether the participants should move the avatar toward the food or away from it.

Another group of participants saw these outcomes and were explicitly told to try to make their avatar as healthy as possible.

Participants who were given a health-related goal also seemed to internalize the relationship between the foods and their consequences – compared with the other groups, they were most likely to approach the healthy food and avoid the unhealthy food when they were given free rein to choose foods without any consequences.

These effects also extended to actual eating behavior. In one version of the experiment, participants followed the avatar task with a supposedly unrelated task that involved rating the sensory characteristics of snack foods, such as candy and potato chips. The results showed that participants who had worked to maximize their avatar’s health in the first task ate smaller quantities of the snacks compared with their peers.

In another experiment, participants who had the goal of boosting their avatar’s health reported less unhealthy eating the next day and a greater intention to eat healthy foods.

Van Dessel was intrigued to find that the results of the inference training were so robust:

“After one instance of inference training, on one occasion, in one specific context, we found effects on participants’ actual snacking behavior and self-reported food consumption a day after the training,” he says. “This is striking because this quick training needs to go against an entire learning history of many years, in which people might have learned that eating unhealthy foods has positive effects for them.”

The findings suggest that when trainees have a goal that requires that they learn the consequences of certain behaviors, it enhances the overall effectiveness of approach-avoidance training. Future research will help to illuminate whether changing certain aspects of the task, such as making it more personally relevant or including more trials, will strengthen the effects.

The researchers are now expanding on these findings, investigating whether consequence-based training can help to reduce other unwanted behaviors (such as smoking and alcohol use), and even increase certain positive behaviors (such as environmentally friendly behaviors).

All data and materials have been made publicly available via the Open Science Framework, as have the design and analysis plans. The complete Open Practices Disclosure for this article is available online. This article has received the badges for Open Data, Open Materials, and Preregistration.