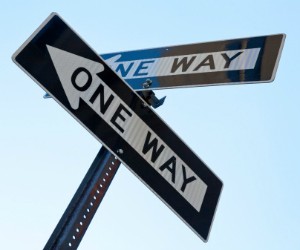 Street signs are almost as old as roads themselves. Evidence for road signs goes at least as far back as ancient Rome, where milestones along roads were inscribed with information to help travelers navigating their way across the huge Roman Empire. Since the invention of the automobile, drivers have been lobbying for ways to make road signs easier to read at highway speeds.

In 1895, the Italian Touring Club kicked off the call for better European road signs, and in 1905 the state of New York began systematically installing road signs throughout in the US. Virtually no research went into ensuring that these early road signs were actually legible for drivers.

In the United States, the Federal Highway Administration has approved the use of a handful of typefaces for use on official road signage. The most commonly used typeface on American highways since the 1940s, Highway Gothic, was never tested or researched for readability.

And this may be a particular problem for individuals diagnosed with dyslexia, a brain-based type of learning disability that specifically impairs a person’s ability to read. Despite having normal intelligence, individuals with dyslexia can have difficulty with tasks related to reading including phonological processing, visual processing, and temporal sequencing. About 5 to 10 percent of American children are diagnosed as dyslexic. People with dyslexia are perfectly capable drivers, but reading traffic signs – particularly at highway speeds – can be particularly challenging.

In a recent study, a team of researchers from Macquarie University in Australia, led by psychological scientist Benjamin Taylor, looked at reading comprehension on the road. After completing measures for adult dyslexia and reading ability, 62 college students completed simulated drives through a series of city, suburban, and rural environments with varying levels of traffic. After each round of driving, participants were asked about their perception and comprehension of road signs (i.e. “No Left Turn” or “Railroad Crossing”) that they had passed during the drive.

The results suggest that participants who had higher dyslexia scores tended to have greater difficulty comprehending road signs, particularly road signs that contained words and no images.

“For individuals with dyslexia, situational processing of road signs may be characterized by a perceptual lag, which has upstream effects resulting in poorer subsequent situational processing,” writes Taylor and colleagues.  “Consequently, in the fast-pace and ever-changing driving environment, dyslexics may take longer to perceive road sign information, resulting in a reduced ability to comprehend and project this information as new stimuli appear within the visual scene.”

That is, road signs that incorporate images may be easier for dyslexic individuals to “read” than signs that only utilize text.

People with dyslexia aren’t the only drivers who have problems with road signs: Since 1993, an interdisciplinary team of designers, engineers, and psychological scientists at Pennsylvania State University have been arguing for evidence-based improvements to make road signs easier to read.

Through a series of experiments, this team designed a newer typeface called Clearview that has been found to have much better visibility on the road compared to older fonts. Clearview was designed to improve legibility at high speeds by incorporating special spacing based on how a viewer reads a legend from an extended distance and making it easier to differentiate specific letters in the reflective glow of headlights at night.

This new typeface has been slowly replacing older signs in the United States since 2004, and has also been adopted for roads in Canada and Indonesia.

According to Penn State psychological scientist Philip Garvey, “Inadequate signing can be a contributing factor in roadway crashes. Although Clearview was intended to help older drivers, our studies show that the appreciable gain in reaction time provided by the new typeface will be achieved by drivers regardless of age.”