News > Minds at Work > The Dark Side of Empathy 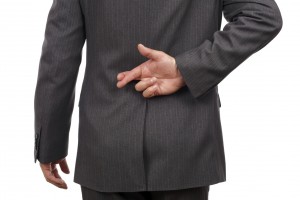 Conventional wisdom, backed up by substantial experimental research, holds that we’re more cooperative in negotiations when we can truly see the other person’s point of view. But in some cases, seeing a situation from the other’s perspective can lead us into unethical behavior.

A team of behavioral researchers suspected that in competitive contexts, perspective-taking draws our attention to conflicting interests and to how a competitor’s actions may threaten our own self-interest. They confirmed their hypothesis in a series of experiments, the results of which are reported in Psychological Science, a journal of the Association for Psychological Science.

In one of the experiments, for examples, the researchers — led by Jason Pierce, Universidad Adolfo Ibanez in Chile — recruited 70 MBA students and assigned them to one of two conditions. Individuals in one group were asked to recall a time when they competed with someone and how they felt during the competition. Those in the other group were asked to recall and describe a time when they cooperated or collaborated with another person.

Next, all the participants were asked to imagine entering a negotiation with the person they had just described. Some were assigned to a baseline condition — they were told to consider how they would approach the negotiation. Others were placed in a perspective-taking condition, and imagined the types of tactics the other person would use.

The study participants were then asked about their willingness to use ethically questionable negotiation tactics. In the group primed to recall competitors, those who were asked to consider the other side’s tactics were more willing to use unethical tactics than were those asked to think about their own behavior. In the group assigned to remember someone with whom they’d cooperated, perspective-takers showed no more willingness to act unethically than did those in the baseline condition.

In yet another experiment, the researchers recruited 233 MBA students to undergo the same type of exercises as described above. But instead of asking the participants about their willingness to use unethical tactics, the scientists presented them with an unrelated task. Each participant was given four minutes to solve a series of four anagrams: CRKO, LABEVE, DSLIE, and FTOEER. The first and third anagrams had several solutions — ROCK, CORK, IDLES, SLIDE — while the second and fourth had none. The participants then were asked to report the number of anagrams they solved. Some misrepresented their performances by saying they had solved more than two.

Again, those in the perspective-taking condition were more likely to exaggerate their performance if they had first been asked to recall a competitor, compared with the participants who recalled someone with whom they’d cooperated.

The researchers say their findings suggest that competitors should maintain psychological distance to avoid amplifying suspicion and use of unethical tactics.

“Although perspective taking has long been thought of as glue that binds people together,” the researchers write, “our experiments demonstrate that it can also act as gasoline that fuels competitive and self-protective impulses, leading to deceptive and exploitative behavior, possibly as a prophylactic against exploitation by others.”

News > Minds at Work > The Dark Side of Empathy