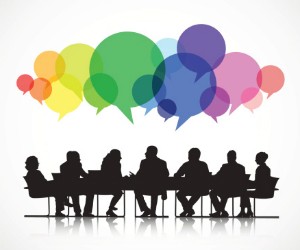 A team of psychological scientists, led by Jack Goncalo of Cornell University, wanted to test whether a politically correct environment would dampen people’s creativity — or whether clear social boundaries would actually encourage diverse groups of people to share novel ideas.

“We present evidence from two group experiments showing that the PC norm promotes rather than suppresses members’ free expression of ideas by reducing the uncertainty they experience in mixed-sex work groups,” the Goncalo and colleagues write in Administrative Science Quarterly.

The researchers hypothesized that men and women in mixed-gender groups try to avoid behaviors that might confirm negative gender stereotypes; men may be wary of sharing ideas that come off as offensive, while women may be concerned about whether their ideas will be rejected by the group, or even seriously considered.

“Our contention is controversial because many have argued that imposing this norm, termed political correctness (PC), might not just eliminate offensive behavior and language but will also cause people to filter out and withhold potentially valuable ideas and perspectives,” the research team writes.  “Creativity in mixed-sex groups emerges, not by removing behavioral constraints, but by imposing them.”

In the first study, 264 college students were randomly assigned to either mixed- or same-sex groups of three, resulting in a total of 86 groups. Before digging into their creative brainstorming task, the students were asked to list the five best examples of how to be either politically correct, sensitive, or polite in mixed-sex work groups, depending on which condition they were assigned to. Students assigned to groups in the control condition were simply asked to list five things they had done the previous day.

The groups were then given 10 minutes to generate ideas together for a new business to fill a vacant lot on campus.

Each group was then rated for creativity based on how many original ideas they came up with. Two coders who were unaware of the experimental conditions rated each idea for novelty using a 5-point scale.

Mixed-gender groups prompted to think about political correctness were the most constructive brainstormers of the bunch; they generated more novel business ideas than their peers in any of the other three conditions (control, polite, and sensitive).

Surprisingly, the PC norm seemed to impair performance in same-sex groups, perhaps because it seemed irrelevant, potentially distracting them from the task.

To measure the influence of uncertainty on group creativity, the researchers designed a second experiment. For this study, 219 students were again randomly assigned to either same-sex or mixed-sex groups, but this time they were prompted to either think of a time they were uncertain or certain about behavior from the opposite sex. Before completing the group brainstorming task, half of the groups were instructed to be as politically correct as possible.

In addition to rating creativity of ideas, the coders evaluated videos of the groups’ brainstorming sessions for verbal markers of uncertainty, like the use of language hedges (e.g., “I am no expert but…”).

The results suggest that social uncertainty stifles creativity in mixed-sex groups, while a PC norm actually buffers against this negative effect.

Without instructions to abide by PC behavior, those in the uncertainty condition had far fewer creative ideas than their peers in the certainty condition. In contrast, when groups were instructed to stay PC, their level of creativity was unaffected by uncertainty. Additionally, the PC groups employed fewer verbal hedges than the control group.

“The PC norm clarifies and enforces the norm to avoid sexist language, which reduces otherwise high levels of uncertainty in mixed-sex groups and signals that the group is predictable enough to risk sharing not only more ideas but ideas that were also more novel.”

The researchers suggest that future studies could also look at whether PC norms show similar effects in groups that are racially, culturally, or otherwise diverse.