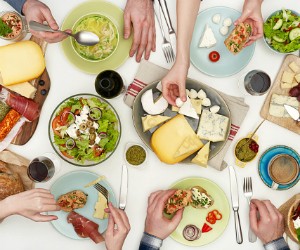 Getting people from diverse backgrounds to work together smoothly is one of the biggest challenges organizations face. One of the easiest ways to encourage employees to cooperate may be as easy as pie – or, maybe that sandwich place around the corner. Companies that invest in an inviting cafeteria or shared meal space may be getting a particularly good return on their investment, according to new research from Cornell University.

To find out how group meals go on to influence team cooperation within organizations, psychological scientist Brian Wansink and colleagues designed their study around a group known for sharing meals on the job: firefighters.

“We are interested in the degree to which behavior that might seem superfluous or wasteful to outside observers ultimately carries significant importance for organizational performance,” the researchers write. “As a prototypical example of worksites where coworkers eat with each other, firehouses provide a valuable entry point for exploring the organizational benefits that we find to be related with supports for workplace commensality.”

The team of interdisciplinary researchers included lead author Kevin M. Kniffin, a Cornell University economist whose father was a firefighter, along with experts in nutrition and sociology. To explore the interaction between eating together and group performance, the researchers conducted interviews with 395 fire house supervisors across 50 firehouses in a large American city. They found that firehouses that ate meals together tended to have better group performance compared to firehouses that favored dining solo.

Beyond the fact that people need to eat, group meals can foster collaboration among co-workers who might not normally interact. Group meals get people talking, which appears to be the reason that eating together increases cooperative behavior on the job.

“Our expectations about the relevance of talking when eating draws upon robust experimental findings that demonstrate that people cooperate significantly more even after engaging in several minutes of ‘cheap talk,’” Kniffin and colleagues explain. “With respect to eating and talking, the two activities appear almost definitionally intertwined as long as the neighboring eaters are familiar with each other.”

Over the course of 15 months, the researchers conducted qualitative and quantitative interviews with firehouse supervisors to collect data on cooperation and dining habits.

On-site qualitative interviews were used to learn about the role of food and culture across 13 different firehouses, allowing the research team to better formulate their quantitative questionnaire. During the interviews, all of the firefighters who were on duty—including officers— answered questions about how often they engaged in group meals, their job satisfaction, cooperative behavior within the work groups, and unit-level performance patterns.

A survey was then sent to all of the firehouse officers across the city. Responses from 244 of the city’s firehouse officers were mailed back to the researchers to be included in the study. The survey asked the firefighters to assess the performance of their current platoons, compared to other groups they had served with, using a 10-point scale.

Communal dining was measured by asking how frequently their platoon cooked group meals over the course of a four-day shift, and what percentage of their platoon was involved in organizing group meals. To measure cooperation, the firefighters answered a series of questions about how often their platoon members were proactive about helping each other on the job.

Measures for better group performance were associated with more frequent group meals. Beyond lunch, additional research has found that happy hour-type situations where people drink together can also enhance social bonding – even among strangers.

In a 2012 study published in Psychological Science, Michael A. Sayette of the University of Pittsburgh and colleagues monitored groups of participants as they interacted with a group of strangers while drinking alcohol. Analysis of the video showed that consuming alcohol with a group enhanced the likelihood of “golden moments,” where all group members smiled simultaneously. Additionally, participants who consumed alcohol together also reported greater social bonding compared to those in the non-alcohol-drinking groups.

Given these findings, organizations may want to start thinking of buying lunch as a good investment in improving employee performance.