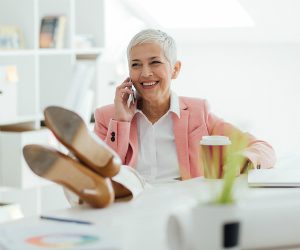 As we get older, does our work become more satisfying? New research illuminates an intriguing conundrum: Job satisfaction tends to improve as we get older but also tends to decrease the longer we stay at a particular job.

“We demonstrated that age and tenure have opposite relationships with job satisfaction, such that job satisfaction increased as people aged yet decreased as tenure advanced — and received a boost when people moved to a new organization, thus starting the cycle anew,” writes psychological scientists Shoshana Dobrow Riza (London School of Economics and Political Science), Yoav Ganzach (Tel Aviv University), and Yihao Liu (University of Florida).

The core result, the researchers explain, was that job satisfaction somewhat paradoxically increased with age yet decreased with tenure.

Riza and colleagues hypothesized that as people get older, they gain more experience in the labor market and obtain better, higher-paying jobs, thus leading to higher job satisfaction. But, as job tenure increases, individuals may receive fewer opportunities for advancement, or become bored.

The 1979 and 1997 cohorts of the National Longitudinal Survey of Youth are two long-running studies conducted by the US Department of Labor’s Bureau of Labor Statistics. Both studies included a wide range of questions about background characteristics, education, and employment collected over a long period of time (29 years and 12 years, respectively).

“These characteristics enable us to untangle the effects of age and tenure simultaneously, unlike previous cross-sectional and shorter-term longitudinal research,” the researchers explain.

Both studies included a single question asking participants to rate their current level of satisfaction at work using either a 4- or 5-point scale. Both studies also included detailed information about wages and income.

Job satisfaction seemed to follow a cyclical pattern where people experienced a boost in job satisfaction when they first started “the honeymoon period” at a new organization. However, this boost tended to decrease over time until an individual moved on to the next organization. But after each change in employment, the overall boost in the job satisfaction cycle started out a little higher on average.

“Overall, the results regarding age indicate that as employees became older and moved between different organizations, they tended to experience an increase in job satisfaction, which can be partially explained by earning higher pay in the new job,” Riza and colleagues write.

The researcher team cautions that they were not able to test a causal theory directly, and that future research would benefit from looking at a wider array of job benefits beyond just pay.
To counteract the expected decline in job satisfaction from veteran employees, the researchers suggest that managers look for ways to change things up a bit, providing opportunities for job rotations, temporary relocation assignments, or sabbaticals.