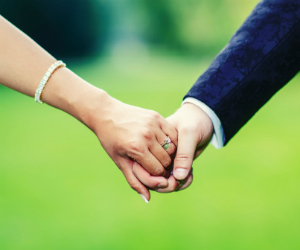 Wedding vows often cover “for richer or poorer,” but new research finds that your spouse’s personality may actually improve your chances of getting a raise or a promotion at work.

Several studies have found a link between workers’ personality traits and their success on the job, but psychological scientists Brittany C. Solomon and Joshua J. Jackson of Washington University wondered whether our spouses’ personality traits might also have an influence on our success at work.

“Your husband, wife, or sweetheart probably doesn’t come to work with you every day,” says Solomon in an interview with Fortune Magazine. “But his or her influence clearly does.”

For the study, Solomon and Jackson looked at data from a representative sample of 4,544 heterosexual married people collected over a 5-year period from 2005 through 2009.

The researchers tracked workplace success by asking people how satisfied they were with their jobs, the likelihood they would get a promotion, and whether they’d had any increase in their salary. Participants were also given a personality assessment that measured five major personality traits — openness, extraversion, agreeableness, neuroticism, and conscientiousness.

Solomon and Jackson found that job satisfaction, pay increases, and promotions were all more likely for those people who had a spouse (male or female) with high scores on one particular personality trait: conscientiousness.

Because conscientious people tend to be reliable, organized, and good at managing chores and finances, the researchers hypothesized that people with conscientious spouses are able to “outsource” more household responsibilities to their spouse — allowing them more time and energy to focus on getting ahead at work.

Having a spouse who helps keep home life running smoothly may also help people excel at work by making it less stressful to balance their work and life commitments.

“Our findings indicate that highly conscientious partners help improve their spouses’ occupational success, as measured by job satisfaction, income, and promotion,” Solomon and Jackson write in their original research article, published in Psychological Science. “This benefit does not arise from partners doing their spouses’ work; rather, it is due to partners creating conditions that allow their spouses to work effectively.”

People benefitted from having a conscientious spouse regardless of whether both the husband and wife worked, or whether one person stayed home. However, the effect of partner conscientiousness on income was stronger for participants in single-income households.

The researchers identified several ways that a conscientious spouse may create positive conditions at home that end up helping their partner succeed at work.

As part of the survey, Solomon and Jackson asked each member of a couple whether they or their partner were responsible for particular chores, such as preparing meals and doing the dishes. They found that higher partner conscientiousness was associated with more outsourcing of household chores to the conscientious spouse, and outsourcing was, in turn, associated with higher income.

The researchers suggest that people may also emulate their conscientious spouse’s good habits over time, leading to better performance at work.

Solomon and Jackson suggest that the findings could have interesting implications for how we choose potential long-term romantic partners.

While previous research suggests that most people seeking potential mates tend to look for partners who score high on agreeableness and low on narcissism, this study suggests that people with ambitious career goals may want to look for organized, supportive, and reliable in addition to tall, dark, and handsome.

This is what I have been saying to you for years!!!! Being conscientious matters more than anything!!!