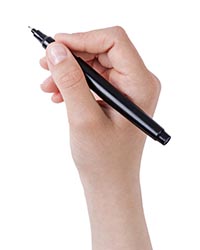 Stringing together words on a page to communicate something meaningful, insightful, intriguing, or persuasive is an essential skill that serves us throughout our personal and professional lives, no matter our interests or discipline. And yet, this essential and complex ability starts with a more basic skill that may be disappearing in the age of computers and mobile devices: handwriting.

It’s not surprising that some education initiatives and policies, including the Common Core, are shifting away from writing by hand now that many children are exposed to media devices as early as infancy. But, at the same time that school systems are rolling out laptop and tablet programs and cursive is becoming a relic of a bygone era, scientists are finding that handwriting is much more than an outmoded form of communication.

With so much curriculum to cover, even at young ages, dedicating instructional time to handwriting may seem inefficient, especially given children’s increasing familiarity with keyboards. But research suggests that learning how to make snake-like Ss, spiky Ks, and bubble-shaped Bs may have an important impact on skills that contribute to overall literacy.

In a 2005 study, Marieke Longcamp of the Université Paul Sabatier in France and her colleagues found, for example, that preliterate preschoolers who practiced writing words by hand performed significantly better on a letter-recognition task than did preschoolers who practiced typing the same words on a keyboard. The researchers concluded that exposure to letters may not be sufficient for letter recognition — rather, we build a strong internal model of letters through the act of actually writing them by hand.

And a 2006 study from Longcamp and colleagues suggests that this process isn’t limited to young language learners: Adults who were exposed to previously unfamiliar characters from the Bengali and Gujarati alphabets were better at recognizing the characters they had practiced writing by hand than those they had practiced typing.

The researchers speculate that the advantages of handwriting may stem from the way information must be integrated across sensory modalities when we write by hand:

“[H]andwriting provides on-line signals from several sources, including vision, motor commands, and kinaesthetic feedback, which are closely linked and simultaneously distributed in time. No such spatio-temporal pattern occurs in typewriting,” Longcamp and colleagues write.

Research investigating a direct causal link between handwriting and general literacy is sparse, but data from neuroimaging studies hint that handwriting could support literacy skills involved in both reading and writing.

In a 2012 study, psychology researchers Karin James of Indiana University and Laura Engelhardt, now at the University of Texas at Austin, asked preliterate 4- and 5-year-olds to practice various motor skills, including tracing, drawing, and typing capital letters and shapes. The children then passively viewed letters and shapes while lying in an fMRI scanner. The results showed that perceiving the letters activated brain regions known to underlie reading and writing — including the inferior frontal gyrus, the fusiform gyrus, and the posterior parietal cortex — but only for those letters that had been practiced by hand.

The researchers conclude that “printing may be the gateway through which children learn the attributes of letters that are important for successful categorization.”

But what benefits could handwriting have for those of us who learned our letters long ago, who read and write with considerable fluency? Does the utility of writing by hand diminish as literacy increases?

Maybe not. Research suggests that writing by hand may also have a significant impact on our ability to retain information.

In research published this year in Psychological Science, researchers Pam Mueller of Princeton University and Daniel Oppenheimer of the University of California, Los Angeles, Anderson School of Management investigated memory for lecture material in college students who took notes by hand and those who took notes on a laptop. They found that the two groups of note takers performed equally well on questions that involved recalling facts from the lecture. When it came to answering conceptual questions that required them to apply what they had learned in the lecture, however, students who took notes on a laptop performed significantly worse than those who took notes by hand.

The researchers speculated that laptop users’ notes may reflect “mindless transcription” of the lecture, supported by the fact that their notes contained relatively more words and more verbatim overlap with the lecture material. Even when the laptop note takers were explicitly instructed to avoid verbatim transcription, they seemed to have difficulty doing so.

Perhaps the most striking result was the fact that longhand note takers still outperformed laptop note takers on a test 1 week later, after both groups were given a chance to review their notes.

Taken together, these results suggest that modality matters, even for the most diligent note takers.

“It may be that longhand note takers engage in more processing than laptop note takers, thus selecting more important information to include in their notes, which enables them to study this content more efficiently,” the researchers write.

Handwriting may be disappearing from educational and professional settings, but it also seems to be disappearing from personal communication as longhand letters and calligraphed invitations give way to all things “e” — email, e-vites, e-announcements. Anecdotally, the few occasions that do require extended writing by hand inevitably produce a chorus of, “But my hand hurts!” Like any motor skill, handwriting may become more difficult without practice, and research suggests that writing less by hand may even have consequences for our motor repertoire.

A 2011 study led by Sandra Sülzenbrück of the IfADo-Leibniz Research Centre for Working Environment and Human Factors in Germany suggested significant differences in motor performance between adults who wrote primarily via computer and those who wrote primarily by hand. Specifically, the computer writers were slower on a line-tracing test, a test designed to gauge precision and speed of continuous arm–hand movements. These results held even after the researchers controlled for potential confounding factors including age, gender, number of errors on the task, and total amount of weekly writing activity.

While the sample size was small, Sülzenbrück and colleagues concluded that computer use may have effects on “fine motor skills and thus more general features of the human behavioral repertoire.”

Ultimately, the results suggest that our cultural shift from writing by hand to writing by computer could have downstream consequences that extend beyond the ability to produce consistent, legible, or neat script, influencing basic motor skills.

I did a fourth year thesis on this topic at Trent University in Canada. We found similar results when students “studied” word lists by computer or handwriting and then were tested using either mode. I only hope that this research can help students in the future by putting handwriting back into the schools and thus creating a better learning environment for them.

I listened to a programme on the BBC world service on 30 January 2015. Karin James was a contributor along with two others. The value of hand and finger manipulation and cognitive development in children is fascinating. After all the development of pentadacyl limbs (forelimbs specifically without the need for using them in walking allowed the freedom of experimentation. These changes went hand-in-hand so to speak with greater and more complex brain power. ASs Lorrie Taylor says let’s put handwriting back into schools.

Anna Mikulak is Assistant Director of News & Information at APS. She can be contacted at amikulak@psychologicalscience.org.