Publications > Observer > Observations > Toddlers and Touchscreens: A Science in Development

In the last decade, smartphones and tablets have gone from being rare luxury devices to essential components of everyday life: Results of a recent survey show, for example, that family ownership of touchscreens in the UK increased from 7% in 2011 to 71% in 2014 (Ofcom, 2014). APS Board Member Annette Karmiloff-Smith and Tim Smith, psychological scientists at Birkbeck, University of London, want to know how this rise in digital technology may be affecting early child development. To do so, the scientists have established the TABLET project, funded by the Leverhulme Trust, which aims to document the central role that touchscreen devices seem to play in family life and the enthusiasm that most children show for using the devices — in addition to recording parents’ concerns about digital technology. 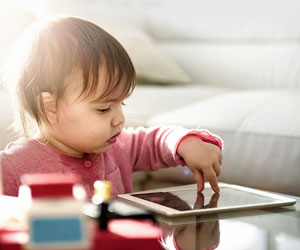 The researchers are inviting families around the world to participate in the newly-launched study by completing a series of online questionnaires. The study is open to parents of infants and toddlers ages 6-36 months, whether they have access to tablets in the home or not.

For families living near London, there will also be a follow-up study at Birkbeck’s BabyLab to gain more detailed insight into possible differences in socio-cognitive and brain development between children who are exposed to tablets and those who are not.

The aim of the TABLET project is to provide an evidence base for parents, policymakers, and scientists to understand how the youngest generation is developing in the context of a media-filled environment and to inform future decision making.

Smith and Karmiloff-Smith spoke with APS about the TABLET project and its implications:

Why are tablets different from other toys toddlers might play with? What makes them special?

Touchscreen devices offer contingent audiovisual sensory stimulation based on a child’s physical interaction. The variety, frequency and complexity of the contingent responses the child can get from tablets, smartphones and other touchscreen devices far exceeds anything a traditional physical toy can provide and may generate heightened levels of cognitive activity. Also, the multi-touch interface is an incredibly intuitive way of interacting with a device. Infants seem to be able to learn to tap and flick a screen before they have fully developed fine motor control (Cristia & Seidl, 2015). This combination of rewarding interaction with varied sensory and cognitive stimulation may have the potential to have positive (and perhaps negative) impacts on attention, fine motor control and other cognitive domains.

This is clearly a new area of research — is there any existing empirical research that has examined the effect of tablets on child development?

Given that the Apple iPad was only introduced five years ago, tablets and touchscreen devices have been a relatively recent introduction into the media environment of children. The enthusiasm with which children use these devices is evident to any parent, but so far developmental science has been slow to investigate in a detailed manner the relationship between tablet use and cognitive development. In older children, actively playing video games has been shown to predict enhanced visual processing, attention and motor control (Green & Bavelier, 2008) whilst passive viewing of television has been related to a decrease in language ability (although this effect disappears when the socioeconomic status of the family is taken into account; Schmidt et al., 2009).

The majority of the existing literature on media exposure in early childhood is dedicated to TV and movies with the findings generally indicating that, contrary to popular views, not all TV exposure is bad. Exposure to educationally–informed programming (such as Sesame Street and Dora the Explorer) and co-viewing with a parent may have a positive impact on various aspects of cognitive development including executive function, vocabulary, expressive language, school readiness and numeracy (Linebarger and Walker, 2005; Linebarger, Barr, Lapierre & Piotrowski, 2014; Schmidt and Anderson, 2007). The same is likely to be the case with touchscreens. Passive video viewing on a tablet may lead to less cognitive stimulation than an “app” developed according to educational and developmentally-informed principles of learning (Hirsh-Pasek et al., 2015) or one that fosters collaborative use or sharing with a peer or parent. However, empirical evidence of these relationships is currently lacking.

Considerable research suggests that the ways in which children interact with digital media are just as important (if not more so) than the content of said media. Will you be looking at the social and cultural contexts in which babies and toddlers are exposed to tablets?

Yes, we believe that distinguishing between the actual content and the modes of interaction with the devices will be critical for understanding the short- and long-term impacts that touchscreen use might have on cognitive and social development. As has been found with TV exposure during childhood (Linebarger et al., 2014), the developmental and educational-appropriateness of the content to the child may maximize its positive impact on the child’s development. We will be examining what kind of content the child uses on the touchscreen devices as well as whether their use is mostly passive (e.g. watching videos), active (e.g. playing games, using educational apps) and social, i.e., if they share the experience with a peer or parent. This social mode of interaction may be facilitated by touchscreen devices due to their portability and facility for multiple children to interact with them at the same time, much more so than TV. Whether young children use touchscreens socially and how this relates to cognitive and social development will also be examined in the TABLET project.

Many organizations and groups (for example, American Academy of Pediatrics) have called for limiting children’s screen time, especially among infants and toddlers. Do you think the considerations for tablets ought to be the same as for media more generally?

Our current approach to the TABLET project is to be observational. Given the complete absence of empirical evidence about the positive or negative impacts of touchscreen use on cognitive development, we believe that the initial step is to identify the naturally-occurring correlations between usage and development in the general population when various important factors (such as socioeconomic status) are controlled for. Only once these associations have been established can scientifically informed guidelines be developed.

To learn more about the research or to participate in the study, visit the TABLET project website: http://www.bbk.ac.uk/tablet_project/

Ofcom. (2014, October). Children and parents: Media use and attitudes report. Retrieved from http://stakeholders.ofcom.org.uk/binaries/research/media-literacy/media-use-attitudes-14/Childrens_2014_Report.pdf

Publications > Observer > Observations > Toddlers and Touchscreens: A Science in Development

Recently I heard a clip on BBC Click about touch screen technology for young children by Dr Tim Smith.

Any chance of a link to Dr Smith’s work in this field?