Spend more than a few hours with a child under the age of 10 and “why?” is a question you’re likely to hear a lot. Children are naturally curious explorers, and they actively try to understand the new and incomprehensible things around them. Psychology researchers have discovered that this natural curiosity can be harnessed to help even young children grasp some of the important scientific concepts involved in natural selection. 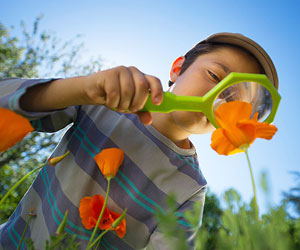 Psychological scientist Deborah Kelemen of Boston University and colleagues observed that by the time children formally learn about natural selection in school — typically between grades 8 and 12 in the United States — they have often formed causal misconceptions about how such change occurs over time.

The researchers hypothesized that these misconceptions might be avoided if the basic concepts surrounding natural selection were introduced earlier, in a clear and understandable way. Their findings support this hypothesis, indicating that young children really can be taught concepts that are often thought of as “too advanced”:

“It shows that kids are a lot smarter than we ever give them credit for.  They can handle a surprising degree of complexity when you frame things in a way that taps into the natural human drive for a good, cohesive explanation,” Kelemen said in a statement from Boston University

The researchers recruited 28 five- to six-year-olds and 33 seven- to eight-year olds to participate in the study. The children were presented with a storybook that told about a fictional mammal with a trunk, the pilosa; the pilosa uses its trunk to get insects for food. When the climate changed, the insects moved underground, into long, narrow tunnels. This was no problem for the pilosas that had thin trunks, but the pilosas with wide trunks could no longer reach the insects and many of the wide-trunked pilosas didn’t survive.

After presenting the story, the researchers asked the children several closed-ended and open-ended questions to gauge their understanding of certain isolated facts and to see whether they could provide a coherent causal explanation.

Both the younger and older groups of children showed significant learning as a result of the storybook intervention. For example, 82% of the younger children demonstrated no relevant understanding of natural selection before hearing the story, whereas only 11% remained at that level after the intervention.

Given their more advanced developmental capacities, it is perhaps not surprising that the 7- to 8-year-olds “showed especially robust abilities to suppress emergent competing commonsense ideas and master task demands.”

Both age groups were able to generalize the concepts to a new species and were able to retain their understanding over a 3-month period.

“The present results suggest that comprehensive instruction about core evolutionary mechanisms can begin earlier than is currently recommended,” Kelemen and colleagues write. “Consistent with views of children as natural theory-builders, the young children in these experiments showed remarkable capacities to comprehend and abstract not only isolated facts but also mechanistically rich, novel scientific explanations when both the facts and the explanations were presented in a cohesive framework.”

The research was highlighted in stories from several news outlets, including the Wall Street Journal, NPR, Scientific American, and Business Insider.

Many psychologist emphasize he information-processing model of cognitive development. Meaning that children continually developing attention, memory, and problem solving skills. Therefor the children in this study are well equipped with the basic cognitive skills to comprehend what the storybook was conveying to them. More over able to easily apply that to humans survival of the fittest when the correlation between the two are then explained.

Children’s brains are constantly developing and learning. They start from birth being able to react and comprehend, and with each aging milestone, their brains develop a little bit more. It makes since that the children were able to understand natural selection after reading the book because the book was taught in a way that was appropriate to their age group, making it fun. It also helped paved the path for futhur brain development, such as memory and adults use of mnemonic skills.

Psychologist Jean Piaget “believed that children actively try to make sense of their environment rather than passively soaking up information about the world”. Something very interesting that he discovered was children don’t just learn new information, but learn to think in a new way because of the information they have taken in, and that is exactly what the children from this experiment did. Children are constantly growing and not only taking in new information but accommodating their way of thinking, and this is why the knowledge of children should never be underestimated. And as they found with natural selection in this experiment, I think there may be many other things that we should be introducing to our children earlier in life to get them started.

Whilst I agree with most of the above comment, it is worth pointing out that Piaget wasn’t entirely correct. In fact, his developmental stages are complete rubbish. This is not to say I do not value the work of Piaget, he was a revolutionary constructivist. His ideas on the accomondation and assimilation of information has some truth to it. Bruner’s theories of scaffolding and modes of representation are regarded as a more accurate way to explain how children acquire new information.