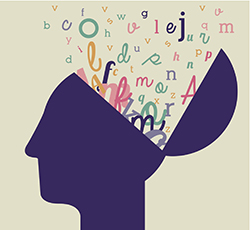 Some of us have a gift for memorization and recall — think Sherlock Holmes. The fictional Holmes was portrayed as having a natural gift, but others train their memories using mnemonic techniques. Although the general principles have been known for hundreds of years, modern mnemonists refine them and adapt them. What cognitive abilities and training permit people to recall 80 random numbers after studying them for less than 60 seconds or to memorize the order of a shuffled deck of cards in under 30 seconds?

Over the weekend of May 2–3, 24 memory athletes gathered at the 2nd Annual Extreme Memory Tournament (XMT) in San Diego as part of a contest sponsored by Washington University in St. Louis and Dart Neuroscience, a private enterprise dedicated to helping people maintain and increase their cognitive capabilities through drugs, treatment, and technologies. The integrative effort involved Past APS President Henry L. “Roddy” Roediger, III, and two colleagues — APS Fellows David Balota and Kathleen B. McDermott — to raise awareness of “mnemonists,” or memory athletes, and to seize an opportunity to study them while they performed various memory feats. The contestants competed against one another in 5 primary tasks — remembering 80 random digits, 50 randomly ordered words, a shuffled deck of cards, 30 pictures (in order) from a large set, and 30 face–name pairs. The study time was always 60 seconds (although contestants could stop early to try to ace an opponent), with 4 minutes given for recall. The contestants were placed in groups the first day, and the 16 winners who emerged faced head-to-head competition the next day until the final match occurred late in the afternoon.

Most mnemonists use a technique called building a “memory palace” when memorizing new information. In doing so, they create an image representing the item they want to remember and then mentally “place” that image somewhere in their large set of familiar locations, such as in a family home or on a walk to work. By using the familiar mental route through the palace, they are then able to retrieve these images, and thus the information. It sounds easy, but it takes great training to become proficient. Preliminary findings conducted by Roediger and his colleagues suggest that one salient skill these memory athletes share is focused attention — that is, the ability to block all physical and cognitive “noise” while storing the relevant information in their brains.

One of the goals of the competition was to raise awareness of such events and research and to cast a wider net for memory athletes in so doing. Dart Neuroscience and a team of researchers at Washington University in St. Louis are developing a Web-based platform to test users remotely. Roediger noted that people in the Philippines and Mongolia often score highly in memory competitions; being able to study such mnemonists from afar would enable memory researchers to gather both larger and more diverse samples of this small but fascinating population.

Johannes Mallow, a 33-year-old German, won the 2015 competition and set the tournament’s record for numbers by memorizing 80 digits in 21.01 seconds. Simon Reinhard, a 32-year-old German who won last year’s tournament, set the 2015 records for cards (52 cards in 23.34 seconds), names (28 names in 60 seconds), and words (48 words in 59.24 seconds). Enhkjin Tumur, a 17-year-old from Mongolia, set the record for remembering 30 pictures in order (studying them for only 14.40 seconds and remembering them perfectly).

The top three contestants were all Germans. Boris Konrad came in second, after Johannes Mallow. Simon Reinhard, last year’s XMT champion, came in third. However, the fourth place finisher was Alex Mullen, an American who only recently burst onto the scene in memory competitions. Mullen is a medical student at the University of Mississippi.

Nelson Dellis, a four-time US Memory Champion, helped organize the event. He holds the US national record for memorizing both a deck of cards and the most numbers in 5 minutes, at 63 seconds for a deck of shuffled cards and 303 random digits in 5 minutes. Dellis, who works closely with Roediger and his colleagues at Washington University, also gives demonstrations of his abilities along with motivational talks. Dellis teamed with Roediger in giving the “Bring the Family” address at the 2014 APS Annual Convention.

Are there Memory Championships available for 80+years-old people.

I realize that the World Memory Championships are open-age but I am looking for older categories.