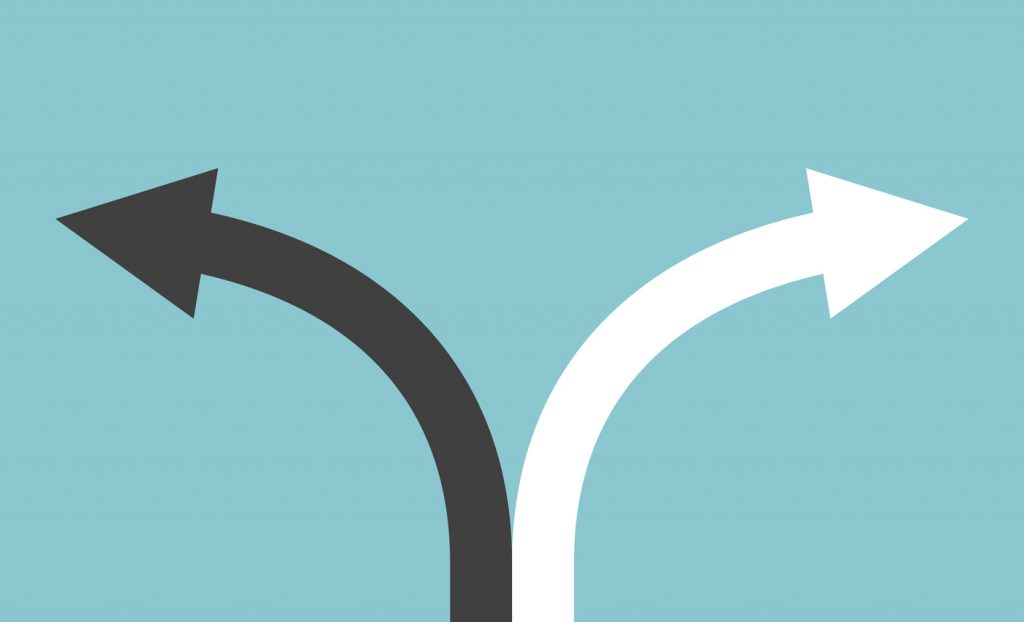 Thinking in black and white arranges the world into extremes: good and bad, yes and no. This duality might be help us make sense of the world but the truth is that most things can be approached from multiple perspectives, adding shades of grey to otherwise clear-cut answers. The tendency to overlook these alternatives and intricacies, known as absolutist thinking, can contribute to problematic patterns of thought.

Absolutist thinking, or thinking in terms of totality, is communicated through words such as “always,” “nothing,” or “completely,” and often appears in the thought processes of individuals diagnosed with eating disorder (ED), and affective disorders such as borderline personality disorder (BPD) and suicidal ideation. Understanding how people suffering from affective disorders think, not just what they think, is an area of interest for cognitive psychologists. Past research shows that two aspects of language – negative emotion words and first-person pronoun use – are associated with depression and other affective disorders. However, how people write about their experiences can serve as an implicit marker of cognitive processes.

In an article in Clinical Psychological Science, researchers Mohammed Al-Mosaiwi and Tom Johnstone explain that “a shift in focus to how we think rather than what we think can provide greater insight into possible cognitive mechanisms underlying affective disorders.”

In their article, Al-Mosaiwi and Johnstone present research investigating absolutist thinking and its link to various affective disorders. Only preliminary empirical work has investigated its connection to other affective disorders like anxiety and depression, even though it is addressed in cognitive therapy for those disorders.

Al-Mosaiwi and Johnstone conducted three studies to examine absolutist thinking, using a computer program to perform text analysis of 63 Internet forums and posts from over 6,000 contributors. The forums allowed for observation of natural language, increasing the generalizability that a structured response format would not provide.

In all three studies, the program created an index based on the percentage of absolutist words used in the forum group. In order to rule out other factors related to affective disorders, such as negative emotions and personal pronouns mentioned above, the program also ran posts through 73 other pre-existing dictionaries.

In the first study, the researchers compared forum groups for people suffering from anxiety, depression, and suicidal ideation. To address potential confounding characteristics, the researchers created “general” comparison groups, which included forums to control for gender (ex. Ladies Lounge, Askmen), age (i.e. Student Room for a young group and Pensioners Forum for an old group), chronic physical illnesses (asthma and diabetes forums), and cancer (a form of severe physical and psychological distress). The absolutist word content of each of these forums did not vary, allowing the researchers to combine these general groups into a single control group.

In a third study, the researchers analyzed subforums of depression and suicidal ideation for people in recovery from those disorders, to identify whether absolutist thinking persists as a possible cognitive vulnerability to experiencing another episode in the future. The absolutist index of the recovery subforums was significantly greater than the control groups from the first study. This result is particularly important, as it suggests that individuals continue to show cognitive vulnerability associated with the disorders, even when they are in recovery.

Some aspects of the research design may limit how the results are interpreted and applied. In particular, the observational research design offers low experimental control. Al-Mosaiwi and Johnstone also note that, beyond a basic check, they were not able to confirm whether each individual was actually a representative of the group.

Additionally, the absolutist index cannot be used as a diagnostic or clinical tool, as it is simply a means of observation and comparison across groups. In a separate article, Al-Mosaiwi and Johnstone explain that, “it is of course possible to use a language associated with depression without actually being depressed.”

Future research could employ an alternative design that ensures participants are representative of the groups of interest, as well including measures that tap into their motivation for writing. Because absolutist thinking also varies within a person, and thereby influences affective symptoms, researchers should also test experimental manipulations of absolutist thinking in individual participants.

BPD is Bipolar Personality Disorder? Is that a thing?

Yes, both disorders use “BPD.”

i have a depressive disorder for many years now. It started when my mom and dad got a divorce. And i am the only child so it’s really hard for me to accept it. Everyday i wake up i don’t know what will i do or should i continue my life. Luckily i have this friend who introduce me the CBD at first i don’t know what will be the effect of this. But i tried taking it and it really helps me a lot. I’m taking 100mg of CBD as well same as yours. So now i believe that CBD is the best solution.