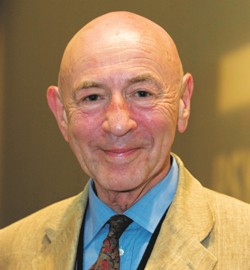 Walter Mischel’s classic studies in childhood self-control, known popularly as the marshmallow tests, are among the most famous and impactful experiments in psychological science. Now, this research is earning special recognition from scientific, academic, and business organizations and federal lawmakers for having survived initial doubts to spawn major scientific breakthroughs.

Nearly 50 years after he employed the sugar candies to study children’s ability to delay gratification, Mischel, an APS Past President and Williams James Fellow, along with his colleagues, APS Fellow Yuichi Shoda (University of Washington) and Philip Peake (Smith College), have been selected to receive the first of the 2015 Golden Goose Awards in recognition of their extensive contributions to the understanding of the lifelong benefits of self-discipline.

Past recipients have included pioneers in other fields such as microbiology, marine geology, economics, computer science, mathematics, and biochemistry.

The congressionally endorsed Golden Goose Awards were inspired by US Rep. Jim Cooper (D-TN), who proposed the recognition as a way to increase understanding of the nature of science. In addition, the Golden Goose is meant as an antidote to attacks on science such as the Golden Fleece award, a gimmick created by the late US Sen. William Proxmire (D-WI), to highlight what he termed wasteful federal spending that targeted peer-reviewed science often just on the basis of a study’s title or abstract.

Cooper envisioned an award that would highlight examples of seemingly obscure, federally funded studies that have led to major discoveries and significant societal impact. Several organizations, including the American Association for the Advancement of Science, the Association of American Universities, and the Progressive Policy Institute, took up Cooper’s idea and began issuing the awards annually in 2012. APS is among the sponsors of the award.

Mischel first designed his storied experiments in the late 1960s. Then a researcher at Stanford University, he tested young children’s ability to resist the impulse to eat a single marshmallow. If they could sit alone in a room for a set period of time without succumbing to the temptation to eat the marshmallow, they would receive two treats instead of one. He was told he would be better off asking a candy company, rather than the National Institutes of Health, to fund the research, although he did ultimately garner NIH backing.

Years later, the importance of Mischel’s early work grew exponentially when he, along with then-graduate students Peake and Shoda, checked in on the original children to see how their lives were progressing; they found that children who had exhibited higher self-control in the marshmallow test were generally more successful as adults.

“Who knew that marshmallows could lead to such important discoveries?” Cooper said in announcing the award. “Thanks to federal funding of this research, we know a lot more about how kids’ behavior affects their adult behavior. As the twig is bent, so grows the tree.”

Through decades of research, Mischel, Shoda, and Peake have documented correlations between the ability to delay gratification and life outcomes as diverse as SAT scores, body-mass index, the frequency of drug abuse, and measurable differences in brain functioning, which are visible thanks to modern functional MRI techniques.

Mischel’s findings have immensely enhanced scientific understanding of self-control, particularly the fact that it can be taught, practiced, and learned. Methods developed from this research are now used in far-ranging fields from educational policy to economics to the prevention of addiction and relapses.

Additional information about the Golden Goose Award, including previous winners and sponsors, can be found at www.goldengooseaward.org and on Twitter @GoldGooseAward.