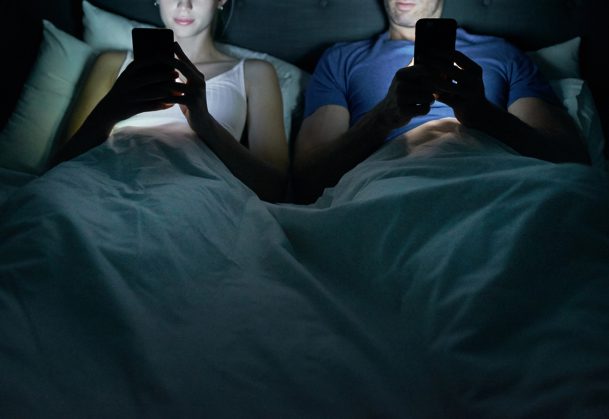 In media interviews last spring, Swisscom Chief Executive Carsten Schloter described some of the pressures he had been under from the very technology that shot him to success — his smartphone.

“Modern communications devices have their downside,” Schloter told Switzerland’s Schweiz am Sonntag newspaper. “The most dangerous thing is to fall into a mode of permanent activity and continuously consult one’s smartphone to see whether any new mails have come in.”

Two months later, Schloter was dead, presumably by his own hand. Media reports suggested he had become dangerously addicted to his handheld device after his marriage disintegrated in 2009.

Smartphones have brought an unprecedented level of convenience to our lives. The mobile devices nestle in pockets and sit by bedside tables, allowing us to swiftly track weather forecasts, sports scores, and email messages. But they also make us accessible at any hour to communicate with colleagues, bosses, friends, and relatives.

Schloter’s death may represent an extreme result of the pressures that being constantly connected can create. But psychological research confirms that smartphones are indeed creating a new kind of stress for people at home, at work, and in social settings. The advent of these devices is allowing scientists to identify the line between the handiness and the torment of modern consumer technology.

Studies have begun to reveal how the smartphone sitting on our nightstand impairs our sleep.

A multidisciplinary research team that included psychological scientist Russell E. Johnson, a management professor at Michigan State University, found that late-night smartphone use for work purposes interferes with sleep and leaves workers more depleted in the morning and less engaged at work the next day.

The authors conducted two daily studies where they examined the effects of technology — including late-night smartphone use for work — on sleep, energy levels in the morning (depletion), and work engagement the next day at work. The first study was conducted with mid- to high-level managers and showed that late-night smartphone use for work interfered with sleep quantity and quality, and left the managers more depleted in the morning and less engaged at work the next day. The second study replicated these findings with a more representative sample of employees.

That second study also showed that the effects of smartphones were different from those of other technology such as computers, tablets, and television. The researchers theorize that the light emitted by smartphones contributes to sleep problems. Light suppresses the release of melatonin, a hormone that promotes sleep. Yet other electronic devices like TVs and tablets can have similar effects.

So why are smartphones unique? The researchers theorize that smartphones make it impossible to detach from work “owing to their invasive, always-on nature.” Match that with the melatonin inhibition, and you’re in for a restless night.

Karla Klein Murdock, a psychology professor at Washington and Lee University, found a possible link between insufficient sleep and texting — arguably the communications mode of choice for today’s smartphone users. Her research showed that college students who texted heavily took longer to fall asleep, slept less, and felt tired during the day. And texting also exacerbated stress problems for many students.

In a recently published study, Murdock asked student volunteers to report their average daily texting behavior. All the participants underwent tests designed to assess their stress levels and emotional well-being, as well as their sleep quality.

Results showed that higher levels of daily texting correlated with poorer sleep — perhaps because students felt compelled to respond to texts that they received during the night, Murdock said.

In addition, heavier texting activity was associated with increased difficulties in coping with stress for those already experiencing it.

Murdock cautioned, however, that the results could simply reflect high levels of neuroticism or low self-esteem, which could affect stress levels and infringe on sleep quality.

Stress at Work and Play

Research focused on the role that smartphones play in occupational stress yields a nuanced picture. A recent study showed that many people who use their smartphones for work-related communications tend to have a difficult time psychologically detaching from their jobs. This, in turn, makes them vulnerable to work-related exhaustion.

Daantje Derks, Heleen van Mierlo, and Elisabeth B. Schmitz of Erasmus University Rotterdam theorized that intensive work-related smartphone use during the evening — fueling an implicit demand for 24/7 availability — disturbs a person’s ability to psychologically disengage from the stress of the job.

“The increased productivity associated with staying connected to work in the evening hours is often achieved at the cost of mental health, yielding higher stress levels which may lead to poor recovery, impaired performance, fatigue, and sleep complaints,” they wrote in the Journal of Occupational Health Psychology.

To validate their theory, Derks and colleagues contacted professionals from four different sources — an executive search firm, a strategic management consultancy, a large energy company, and their own personal contacts — and asked them to evaluate their work. Specifically, each volunteer filled out a survey on 4 consecutive workdays. On the questionnaire, participants rated how often they feel compelled to check messages on their smartphones when at home, how well they are able to forget about work at the end of the day, and what level of work-related stress and exhaustion they experience. They also rated the degree of their overall workload and the level of off-hour demands that their jobs placed on them.

Derks and his collaborators expected that people who were accustomed to clear work/home boundaries would experience the biggest detachment difficulties as a result of heavy smartphone use. And that’s exactly what they found. Participants who experienced a strict line between work and home showed more difficulty mentally escaping from work the more they used their smartphones.

“This probably occurs because the smartphone brings their work into the home domain, and they were not used to that,” the researchers write.

But interestingly, some people appear to feel less job stress the more they use their smartphones, the study shows: The professionals who said their work normally spills over into their home life were better able to detach from the job on the days they used their smartphones most intensively. Derks and his colleagues propose that these employees may worry more when they can’t attend to the job while working from home. The smartphone, in effect, buffered their preoccupation with work.

Other research is showing that smartphone stress is more than just an occupational burden. In the United Kingdom, University of Worcester psychologist Richard Balding reported on the results of a study showing that stress was associated with personal use of smartphones, but not with work.

For the study, researchers gave 100 participants, including students and employees from a range of occupations, a questionnaire and psychometric stress check. They found that people typically acquire smartphones to help manage their workload. And indeed, the devices live up to that promise. But with that benefit, for many workers, comes new pressure to virtually connect with friends and family — and those personal contacts are the source of stress, the results showed.

Researchers studying the psychological impact of smartphones say further work should try to document how much personality traits factor into the stress associated with use of the devices. In work settings, for example, some smartphone users may have trouble managing a healthy separation of work and personal time regardless of what mobile-accessibility demands their employers place on them.

What’s more, scientists are finding ways to turn smartphones into stress-busters. A recent study published in Clinical Psychological Science showed that a new mobile gaming app based on an emerging form of cognitive therapy could offer measurable mental health and behavioral benefits for people with relatively high levels of anxiety.

Nevertheless, many employers have started to recognize the harm they may be inflicting on workers who carry smartphones with them after leaving the office. An increasing number of companies, including BMW and Volkswagen, have instituted limitations on email communications over smartphones after hours. 

In school, I was the Reporter for our Speech and Debate team. At the end of the year I needed to create an slideshow with pictures from the whole year. I gave my number to every team member and ask them to send me pictures. All though this technically wasn’t work, I was on my smartphone until very late on some nights responding to dozens of texts, saving pictures, and organizing them onto a power point. On these nights, I did notice that I didn’t get much sleep, and that I often struggled with distinguishing between my friends texts and my teammates who were just wanting information about the slideshow. That must have meant that I was really tired. Haha

MY names is Humberto Becerra , and i could relate to this.Every night before I go to sleep i say,”one more Youtube video” but i always end up watching until midnight .

This is honestly hitting home with me. I’m pretty sure i’m addicted to my console, as I stayed up until 1:30 last night finishing Mass Effect 3 and forgetting to put my laundry in the dryer.

Do you want a machine to control you, to own you? Look around, not down. Does society have to go through a whole era of severe overuse and resultant injury to make itself realize this? Email (or texting) only begets more of the same, that’s its purpose. If you use a smartphone all the time (even during sex?!–“I have to answer it,what if it’s important?”), you will become one. No matter how “clever” a digi-gadget is (smartrings, video doorbells, self-driving cars &c.), IT’S NOT HUMAN.