Teaching Current Directions in Psychological Science offers advice and guidance about teaching a particular area of research or topic covered in this peer-reviewed APS bimonthly journal, which features reviews covering all of scientific psychology and its applications.

On Thursday, July 25, 2019, President Donald Trump made a phone call that rocked the stability of his presidency. Chatting with the newly elected president of the Ukraine, Volodymyr Zelensky, Trump requested two favors in return for already-approved U.S. military aid: (a) to investigate former Vice President Joe Biden and his son, Hunter Biden, along with a company on which Biden’s son served as a board member, and (b) to look into a conspiracy theory that Ukraine, rather than Russia, had intervened in the 2016 U.S. Presidential election.

The Trump administration released portions of the phone-call transcript. What followed, according to Cory Clark, Bo Winegard, and Peter Ditto (2019), was a clear case of psychological tribalism. Most U.S. liberals viewed the phone call transcript as clear evidence of high crimes and misdemeanors, which led to impeachment proceedings against President Trump. U.S. conservatives were unimpressed with the phone call transcripts and accused liberals of overreacting.

An October, 2019 Pew survey reported that the United States was almost evenly split: 54% approved the decision to pursue impeachment proceedings. How could people view the same piece of information so differently?

Clark and colleagues (2019) argue that evolutionary science helps make sense of this kind of tribalism. Cognitive biases that promote group loyalty help people to survive and reproduce. Even if biased thinking led people astray, this downside would be offset by the immense benefits that accompany loyal groups. Because liberals and conservatives faced matching selecting pressures, they have a shared biology make-up. Hence, differences between political groups should be expected and are mostly psychological rather than biological. Humans are tribal animals.

“Tribalism is a natural and quite possibly an ineradicable element of human social groups,” Clark said. “It is likely that all groups, and all people within those groups, are susceptible to tribalism and tribal biases.”

A 2018 meta-analysis of 51 experiments supported the tribal animal hypothesis (Ditto et al., 2018). Across all experiments, liberals and conservatives viewed study results they favored as more believable. Both groups showed bias, at equivalent levels.

To bring this provocative research into the classroom, ask students to complete the following two activities. Clark designed these activities to show students how partisan bias is a normal part of human psychology. Because politics can introduce discomfort and controversy, remind students that their responses will remain anonymous.

A study at Yale University followed 100 males and 100 females from a nearby school from first grade through twelfth grade. Each year they assessed the students’ math and science abilities on standardized tests as well as other cognitive abilities related to math skills (e.g., mental rotation).

Once students have read about the study, ask half of the class to close their eyes while the other half reads the following (males-performed-better condition):

The results indicated that male students outperformed female students starting as early as first grade and this difference was stable over time.

Repeat the same procedure, except this time ask the other half of the class to close their eyes and the remaining students to read the following (no-gender-differences condition):

The results indicated that there were no differences between male and female students in math ability.

For all students, ask them to evaluate the study using these questions:

How valid were the study methods?

How sufficient was the sample size?

Have students average their responses to these two questions to create an overall study-quality score. Instructors can tally students’ scores, making sure to label the condition to which students were assigned. If time permits, instructors can draw the results on a whiteboard. Otherwise, show students results from Dr. Clark’s class on the same activity, which likely mirror their own responses: 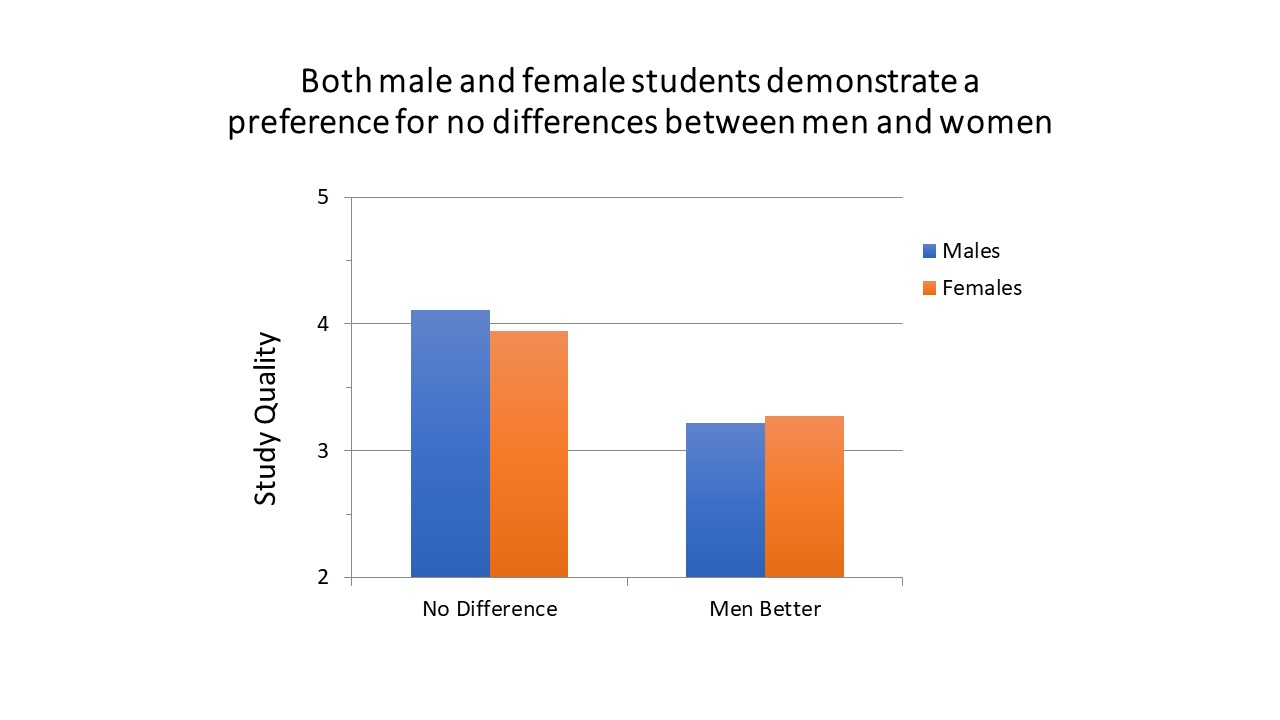 Ask the class to consider these results. How could people view study quality so differently given these results? How does such a perceptual bias — to view data through a biased lens of personal beliefs — affect how people think, feel, and interact with others? What can we do to address these sorts of biases?

The second activity is a memory test. First, ask students to confidentially answer the following questions using this scale:

Next, ask students to report whether they remembered seeing or hearing about the following news headlines:

Write down how many students reported remembering each news headline. Instructors can then inform students that each news headline was fake. Who remembered the headlines most? Those who would support Bernie Sanders in the 2020 Presidential election? Clark completed this activity, and her class results were as follows:

Teaching students about tribalism can aid their critical thinking. By understanding how we evolved certain biased perceptions, students can better understand themselves, their fellows, and their global community.

“Tribalism and tribal biases do not only affect our outgroups,” Clark notes. “They likely affect all groups: mine, yours, and everyone else’s. We are all humans, and thus we are all susceptible to these kinds of biases.”

Imagine sitting in a chair for 10 minutes with nothing but your own thoughts. You aren’t allowed to fall asleep, but you can think about whatever you want. By the way: You’re holding a novelty toy that delivers shocks — if you want to, you can shock yourself while you sit there. Do you think you would do it?

People have reportedly done worse than self-shock out of boredom: Some bored employees started a fire while cremating a mouse (“Bored workers,” 2019); a bored security guard handcuffed himself (“Security guard,” 2019). According to research, these bored troublemakers should have changed their situation’s cognitive demands, made the situation more meaningful, or both.

Use a clicker poll to ask your students if they’d shock themselves under these circumstances. The subsequent discussion will be lively. As it turns out, a body of evidence on boredom has found that most people actually do shock themselves when they are bored (e.g., 15 to 20 times an hour on average; Nederkoorn et al., 2016). But why?

In her recent Current Directions article, Dr. Erin Westgate explains that boredom, like all emotions, provides information. Boredom informs us that “there’s no point doing something anymore — something needs to change.” Westgate’s theory of meaning and attentional components (MAC) identifies the two appraisals that lead to boredom. One is meaning: Activities that are irrelevant to our goals are more boring — the message is “this is not worth doing.” The second appraisal is attentional: Activities that mismatch our attentional resources are boring. A task that’s too easy will usually be boring, of course. But so is a task that’s overwhelming: Boredom in response to the too-challenging task says, “there’s no point trying this task — you don’t have the resources.” Indeed, when people say, “I wish I were bored more often” it probably means they are chronically overchallenged.

According to MAC theory, some people would find 10 minutes of alone time boring (and would self-administer shock), in part because the task seems meaningless and in part because it is not challenging. People might instead increase meaning during the 10 minutes by practicing prayer or meditation. They might increase the challenge by mentally planning a project.

Research on boredom can be useful to teachers, who calibrate both challenge and meaning in the classroom. Our students might check out if they find the work overwhelming, so teachers can adjust task difficulty by helping students develop the skills they need. They can reduce the task’s cognitive load by offloading some information into a slide or handout. For unavoidably easy tasks, teachers can increase meaning: Connect content to future job skills, design service learning, or link lessons to students’ personal lives.

In an introductory or social psychology course, the MAC theory of boredom can help you introduce appraisal theories of emotion. According to appraisal theories, emotions are not identified by their outputs but by their inputs. Westgate (2019) compares it to medical diagnosis: We determine strep infection not by throat pain, but by the presence of relevant bacteria. Similarly, emotions are diagnosed not by how they make people feel or act, but by the appraisals that led to them (as covered in a previous column). Anger is caused by the appraisal that someone has violated your boundaries; happiness can be caused by the appraisal that your goal progress is better than expected (Clore 2009; Carver & Scheier, 1998). In turn, boredom is caused by the appraisal of attentional resources and meaning. Students tend to struggle with the appraisal concept. It may help to point out that when people are angry, their outputs vary a lot — your students can probably come up with several behaviors and faces they may make when angry. Nevertheless, the core appraisal — personal violation — is the same for all anger.

To help illustrate how appraisals cause emotions, use the experiment that manipulated appraisals and caused the emotion of boredom. Westgate has provided slides demonstrating the study (https://tinyurl.com/qplxapb). Walking through the slides, students first experience the too-easy air-traffic-control task (and imagine doing 600 trials of it), and then try the one requiring attentional resources. The second factor — meaning — was operationalized via a charity donation versus control. 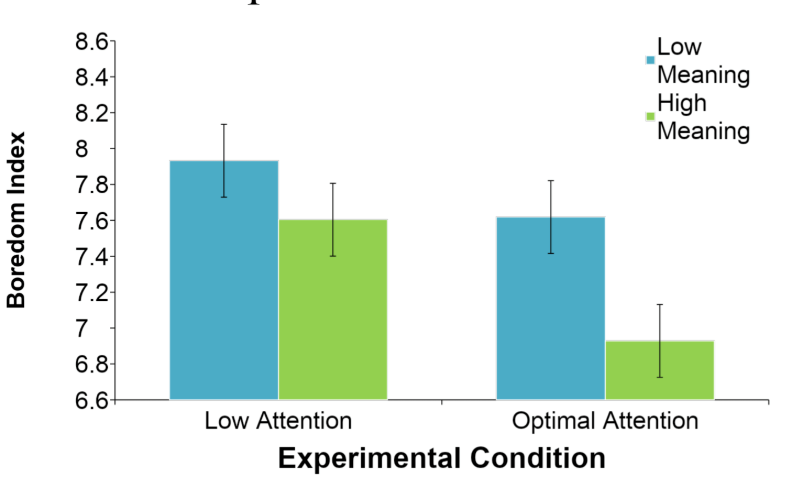 In research methods, the MAC model’s two dimensions can help you introduce factorial designs; the theory predicts two main effects but no interaction. Boredom research also provides a fresh example of a curvilinear relationship: Tasks that are too easy and too hard result in boredom (see Fig. 2). 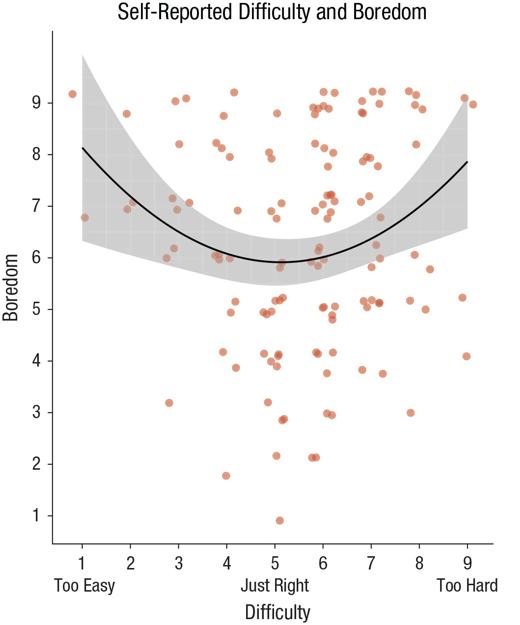 In short, you’ll be shocked to learn how interested students will be in learning about boredom.

APS Fellow Beth Morling is professor of psychological and brain sciences at the University of Delaware. She attended Carleton College and received her PhD from the University of Massachusetts at Amherst. She teaches methods, cultural psychology, a seminar on the self-concept, and a graduate course in the teaching of psychology.

How to Tune Out Office Distractions

Multiple mechanisms contribute to our ability to tune out distractions in the workplace. More