Visit David G. Myers and C. Nathan DeWall’s blog “Talk Psych.” Similar to the APS Observer column, the mission of their blog is to provide weekly updates on psychological science.

Words Have the Power to Inspire Violence and Peace

Words Have the Power to Inspire Violence and Peace

When Franklin Delano Roosevelt asked Congress to declare war on Japan, he chose his words carefully. To stir up support, he expressed anger, contempt, and disgust. He spoke of the sudden and deliberate attack on Pearl Harbor that sparked public outrage. He expressed contempt when he emphasized the enemy’s moral inferiority, stating that the “Japanese government has deliberately sought to deceive the United States by false statements and expressions of hope for continued peace.” He showed his disgust by ensuring future separation of Americans from such intolerable Japanese actions, assuring the American public that “this form of treachery shall never again endanger us.”

Roosevelt’s iconic words follow a familiar pattern. According to APS Fellow David Matsumoto, Mark Frank, and Hyisung Hwang (2015), leaders express elevated levels of anger, contempt, and disgust shortly before their followers act violently. For example, Adolf Hitler’s use of these three emotions swelled in the months that preceded the deadly Kristallnacht attacks against the Jewish people. In contrast, Mahatma Gandhi expressed less anger, contempt, and disgust in the months leading to the nonviolent Salt March in India than he had expressed before the march.

But what leaders say tells only part of the story about how their words can ignite violence or foster peace. How they communicate these emotions also matters. When leaders want to inspire violence, they explain outgroup members’ actions in ways that cause followers to perceive that outgroup as inferior and intolerable (Matsumoto et al., 2013). They also use nonverbal signs of contempt and disgust (Matsumoto et al., 2014).

To bring this cutting-edge research into the classroom, instructors can ask students to consider whether anger, contempt, and disgust also precede less serious acts of aggression. Matsumoto and colleagues examined how these emotions can provoke extreme acts of violence or peace. But most conflict occurs under conditions that are far tamer than those surrounding Hitler’s genocide or Gandhi’s Salt March.

Ask students to pick two sporting teams that have an intense rivalry (the specific sport doesn’t matter). If students have difficulty doing so, they can work with another student or receive help from their instructor. Next, have students imagine the players tweeting about their rival team. How much language conveying anger, contempt, and disgust would each team’s players use 6 months before they play each other? Three months before? One week before? The day before?

How might changes in such language predict changes in how aggressively each team plays? For example, might increases in angry, contemptuous, and disgusted language relate to more technical fouls between basketball teams, penalty box minutes between hockey teams, yellow and red cards between soccer teams, and unsportsmanlike conduct penalties between football teams?

A second activity draws on the upcoming US presidential election. (In classrooms outside the United States, instructors may feature another upcoming election that will capture their students’ attention.) Using PowerPoint, instructors can display the faces and names of each major Republican and Democratic presidential candidate. Students will then work with a partner to predict how much each candidate’s public speeches will express anger, contempt, and disgust during the remainder of his or her campaign. Before the final Republican and Democratic candidates are selected, might these emotions be directed more at same-party candidates than at rival-party candidates? Will male candidates express these emotions more than female candidates will? If so, why?

This activity can function as a starting point to discuss emotional expression of political leaders. When might people want their leaders to express anger, contempt, and disgust? When are these emotions inappropriate? Does expressing these emotions produce long-lasting or only temporary behavior change?

Most of the time, words dribble out of our mouths without much fanfare. We pay little attention to whether our language will inspire others to take up arms or usher in peace. But words can leave a powerful trace. Violent words beget violent actions. The good news is that peaceful words also precede peaceful actions. By being mindful of our words, we can help avoid conflict and nudge others to create a more peaceful society.

Around the world — across 56 nations and 29 languages in one study (Schmitt, Allik, McCrae, & Benet-Martínez, 2007) — people describe others using approximately five trait dimensions: conscientiousness, agreeableness, neuroticism, openness, and extraversion. These are the famed Big Five (which psychological science teachers and their students can remember with the acronyms CANOE and OCEAN).

Do the young and the old share similar trait dimensions? A question for students: If you were a researcher, how might you study the traits of children who are too young to respond to Big Five questions such as “I’m not a very orderly or methodical person” (McCrae, Costa, & Martin, 2005)?

One strategy, used by Soto (2015) in a study of 16,000 3- to 20-year-olds, is to invite behavior descriptions from people who have observed these young people on thousands of occasions — their parents. Parents could rate (using a 9-point scale) their children on nearly five dozen behaviors related to the Big Five dimensions (e.g., “is a talkative person,” “is eager to please”). In addition, Soto measured a trait that differentiates children from adults: activity (e.g., “is energetic and full of life”). This last of the “Little Six” personality traits of childhood recedes by late adolescence, with its physical aspect becoming linked to extraversion and its motivational aspect becoming linked to conscientiousness. (To recreate this trait-assessment method, students could be asked to rate a younger sibling or acquaintance on selected traits or trait-related behaviors. How easy was it? Did it feel the same or different from rating an adult acquaintance?)

Are traits similarly predictive for youth and adults? For children and adolescents, as for adults, personality traits correlate with biomarkers, health, and social behaviors such as friendship and aggression. Traits also predict life outcomes pertinent to youth, including academic success and antisocial or rule-breaking behaviors.

Do childhood personality traits reach into adulthood? Students might ask themselves (and perhaps discuss in small groups) whether they feel like they have always been the way they are now. If they tend to be extraverted or introverted, conscientious or lazy, have they always been so? How did their traits manifest during their childhoods, and how do they manifest now? And is the same stability or change across time true of others in their lives? If they reconnected with an old grade-school friend, would they recognize, from his behavior, “the same-old Jamal — still outgoing, agreeable, and energetic”? Or might they be surprised that their goofball seventh-grade friend, Melinda, is now a conscientious young executive? 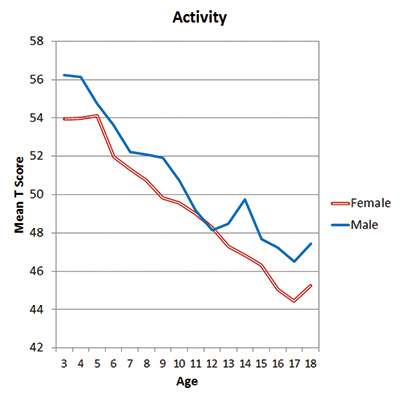 First, some traits change with age. From the preschool years to late adolescence, parent ratings of physical activity levels decline. Neuroticism (emotional instability) peaks in the middle school years but then diverges for boys and for girls (who thereafter become more vulnerable than boys to depression). Early adolescence is “the lifetime peak of meanness, laziness, and closed-mindedness,” report Soto and Tackett. But — good news for parents of young teens — thereafter and into adulthood, the frontal lobes continue to mature, and agreeableness, conscientiousness, and emotional stability increase (see also Bleidorn, 2015; Orth, Maes, & Schmitt, 2015). These data on personality maturation can inform a quick class exercise: Present the gridlines of Figures 1 and 2, without data, and invite students to make guesses about the trend lines.

Second, early life traits preview adult traits. The temperamental 13-year-old may mellow by midlife, yet still be a relatively reactive person. At my 50-year college reunion, I was bemused that affable Steve could still talk for 10 minutes without interruption; that happy Judy was still smiling and laughing; and that determined, focused Annette was highly accomplished and still earnest. A slew of landmark studies following lives through time confirm the point: 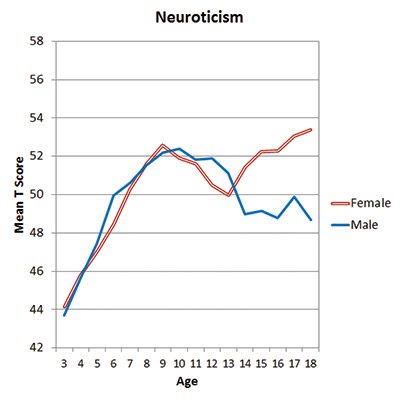 Figure 2. Mean parent-assessed neuroticism, by age and gender.
(From Soto, 2015.)

Self-regulation: Three-year-olds with low self-control are the most likely to become teen smokers, adult criminals, or out-of-control gamblers later in life (Moffitt, Poulton, & Caspi, 2013; Slutske, Moffitt, Poulton, & Caspi, 2012). Hyperactive, inattentive 5-year-olds have required more attention from teachers at age 12 than their less active counterparts (Houts, Caspi, Pianta, Arseneault, & Moffitt, 2010). And 6-year-old boys with conduct problems have been 4 times more likely than those without such problems to be convicted of violent crime by age 24 (Hodgins, Larm, Ellenbogen, Vitaro, & Tremblay, 2013).

Conscientiousness: Even after adjusting for parental status and childhood intelligence, researchers found that the most studious 12-year-olds (as rated by their teachers) became the most occupationally successful adults 40 years later (Spengler et al., 2015).

There is, of course, variability. Some shy children become confident and assertive adults. Some out-of-bounds teens become conscientious civic leaders. Still, who we are tends to endure.

Life is a story of change and stability. Change enables our development, giving us hope for future growth. And stability defines our identities and enables us to know ourselves and understand what to expect from others. 

A sample of research exploring racial bias in perception of size and strength, pathways linking testosterone and aggression, and reactivation of previous experiences. More