Visit David G. Myers and C. Nathan DeWall’s new blog “Talk Psych” at www.talkpsych.com. Similar to the APS Observer column, the mission of their blog is to provide weekly updates on psychological science.

When Two Emotions Are Better Than One

When Two Emotions Are Better Than One: Teaching Students the Importance of Emotional Differentiation

Even if life is usually good, sometimes it gets littered with setbacks, slights, and outright insults. We fail to get the dreamed-of promotion; our colleagues one-up our stories; journal reviewers call us lazy dolts. When confronted with such threats, should we simply feel bad? Or is it healthier to sample from the negative-emotion buffet that includes disappointment, embarrassment, and anger?

Tapping into more emotions improves coping, according to Todd Kashdan, Past APS Board Member Lisa Feldman Barrett, and Patrick McKnight (2015). They argue that emotion differentiation — splitting negative emotion into many pieces and then identifying which one best fits the situation — is a boon to mental health. Separating emotions into, say, anger or sadness helps us get a grip on what is happening and what we can do about it. Knowing what we are feeling helps us cope, freeing us to move beyond an upsetting event and take control of
our lives.

The more people differentiate their negative emotions, the less they succumb to the desire to drink and behave aggressively (Kashdan, Ferssizidis, Collins, & Muraven, 2010; Pond et al., 2012). You can also use emotion differentiation as a tool to understand certain mental disorders. For example, people with social anxiety disorder are less likely than others to differentiate their negative emotions (Kashdan & Farmer, 2014). A lack of emotion differentiation can create a vicious cycle, in which people with social anxiety fail to grasp their specific emotional experience, struggle to cope, and continue to experience similar distressing situations.

Robert and some friends attend a party. The moment Robert walks through the doorway, he sees someone he likes romantically. His palms begin to drip sweat. He clings to the wall, wanting to muster the courage to start a conversation. He is paralyzed by fear. After the party, his friends ask him how it went. He says, “I just felt bad.”

Daniel and some friends attend a party. The moment he walks through the doorway, he sees someone he likes romantically.  His palms begin to drip sweat. He clings to the wall, wanting to muster the courage to start a conversation. He is paralyzed by fear. After the party, his friends ask him how it went. He says, “I was so anxious. I didn’t feel angry, embarrassed, or sad. Just lots of anxiety.”

Ask students to discuss how Robert and Daniel experienced the same emotional situation differently. Might one strategy relate to better mental health? If so, why? Instructors can then discuss how Daniel’s highly differentiated emotional experience may help him identify what he felt and cope accordingly.

Kashdan uses a more direct approach to teach the benefits of emotion differentiation: He puts students in a safe situation in which they need to regulate their emotions. Kashdan tells them they will take part in a class discussion with certain expectations — do not attack another student’s character, do treat each other with respect, and do use good listening skills.

Next, he has students take part in a discussion on a topic that either he or they select. “Any exercise that involves an emotionally provocative situation is good,” he says. “Have students discuss a hot-button topic. Then have them write down the emotion that arose in them during the conversation.” Ask students the number and intensity of the emotions they listed. Also ask them how well they coped with each emotion. Instructors can facilitate discussion regarding a possible link between the number of emotions students listed and the intensity of those emotions. Is there a positive relationship between the number of emotions listed and the students’ abilities to cope?

The next time you try to optimize your emotional experience, avoid efficiency. Try not to save time by labeling your experience as good or bad. Simply putting a label on an emotion does help people cope (Burklund, Creswell, Irwin, & Lieberman, 2014). But when we consider several possible labels — “frustrated,” “disgusted,” “hurt,” “sad,” or “anxious” — we can ferret out the one that matches our experience and apply the best coping strategy. By learning to recognize our emotions, we can overcome situations that bog us down and enjoy a flourishing life.

“Religion affects psychology in many important ways, and is the subject of increasing attention on the part of psychologists,” begins Adam Cohen’s exploration of religious differences. His assertion brings two questions to mind.

First, are psychologists indeed growing more interested in religion? There are new journals, such as Psychology of Religion and Spirituality, and there is heightened interest in the religious roots of both compassion and terrorism. To see whether religion’s place in the psychological literature is increasing, I searched for religion-related words in PsycINFO. The result: There has been a huge surge in publications pertaining to religion, and also a 61% increase since 1990 in the proportion of psychology publications that include the word root “relig.” 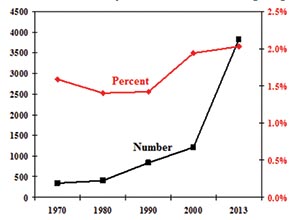 This figure shows the number and percentage of PsycINFO abstracts mentioning the word root “relig.”

Second, we might wonder — and invite students to speculate about — the topics of all these publications. But before introducing “psychology and religion” as a class topic, we might first ask students to guess:

When asked, “Is religion important in your daily life?,” what percentage of human beings, worldwide, do you think answer “Yes”?

By harvesting data from the Gallup World Poll, APS William James Fellow Ed Diener, Louis Tay, and I (2011) offered an answer: 68% — two in three humans — albeit with considerable variation, from 16% in Estonia to 100% in Niger. (With tongue in cheek, teachers could offer the usual caution about generalizing beyond the population sampled. These data represent but one species on one planet, and may not represent the views of other life forms in the universe. Students might also enjoy speculating on reasons for the wide cultural variation.)

Given religion’s prevalence in human experience, it’s not surprising that we now have nearly 4,000 PsycINFO abstracts per year that mention religion. So what religion-related questions might interest psychologists? After jotting down their ideas, students might share them in small groups or as a whole class. Among the possibilities are these:

The last question approximates Cohen’s interest in how religious differences function as cultural differences. Often “religion” is taken as a monolithic variable. Not so for Cohen, who explores religious diversity.

Christianity, he suggests, focuses on thoughts; Judaism on actions (though with variations within each tradition). For Baptist Jimmy Carter, having lust in his heart was a sin. Jews consider thinking about having an affair as “much less morally important.”

In both theology and practice, notes Cohen, Judaism considers some offenses to be unforgivable, and assumes that forgiveness in other cases depends on the person’s repentance. Christians consider few if any offenses to be beyond forgiveness, which can be given unconditionally.

Protestantism, argues Cohen, encourages a sense of independent self — especially in America, with its heritage of religious freedom and emphasis on individuals choosing religion and experiencing a personal faith. American Jews, by contrast, prize practice over individual faith experience. This religious difference is manifest in people’s attributions, with Protestants likely to endorse internal attributions — an effect he and his colleagues dub the “fundamentalist attribution error.”

To this I add one other puzzle students might enjoy pondering. Is religion toxic to human flourishing … or is it supportive of human happiness, health, and helpfulness? Let’s make this empirical: Is religious engagement more often associated with humans living well, or with misery, ill health, premature death, crime, divorce, teen pregnancy, and the like?

For data on this “religious engagement paradox,” which consistently appears across various measures of personal and social health, see www.tinyurl.com/ReligEngagement. There you can also find examples of a parallel “wealth and politics paradox”: In the United States, high-income states and low-income individuals more often vote Democratic.

In small groups or class discussion, students might enjoy wrestling with these paradoxical findings. Princeton economist Angus Deaton and psychologist Arthur Stone (2013) frame the question this way: “Why might there be this sharp contradiction between religious people being happy and healthy, and religious places being anything but?” (One answer, as Diener et al. suggest, appears to lie in the more impoverished life circumstances of people in highly religious countries and states.)

C. Nathan DeWall is an associate professor of psychology at the University of Kentucky. His research interests include social acceptance and rejection, self-control, and aggression. DeWall can be contacted at nathan.dewall@uky.edu. APS Fellow David G. Myers is a professor of psychology at Hope College. His scientific writing has appeared in three dozen academic periodicals, and he has published 17 books, including Psychology (10th ed.), Exploring Psychology (9th ed.), and Social Psychology (11th ed.). Myers can be contacted via his website at www.davidmyers.org.