Rick and Bob are stockbrokers, but their similarity ends there. Rick dreads work each day, chain-smokes, and overreacts to minor market fluctuations. Bob is rarely perturbed, enjoys good health, and has learned to acknowledge and accept life’s inevitable ups and downs. Psychological scientists would describe Bob as mindful. And they would be correct in identifying low and high mindfulness as contributors to why Rick’s health flounders and Bob’s health flourishes.

According to J. David Creswell and Emily Lindsay (2014), an understanding of how mindfulness improves health has been shrouded in mystery. They argue that mindfulness buffers people from stress much in the same way a painkiller dampens unpleasant sensations. But instead of numbing people, mindfulness causes people to take notice of what is happening and accept it — regardless of whether it is a positive, negative, or neutral experience.

To bring this cutting-edge science into the classroom, Creswell uses an activity he calls “Meet Bill.” A series of animated PowerPoint slides illustrate how a little mindfulness produces sweeping changes in how Bill experiences a stressful situation. The first slide, titled “Meet Bill,” provides a caricature of how low levels of mindfulness lead a stressor to disrupt Bill’s general well-being and empathy. The second slide, titled “Meet Mindful Bill,” shows how boosting Bill’s mindfulness creates healthier responses to the same stressor. “By noticing that he’s feeling anger and that his sympathetic nervous system has revved up,” Creswell says, “[Bill] can more effectively engage in regulatory efforts. In this scenario, he takes a couple of deep breaths to bring his heart rate down.”

Instructors can begin by defining mindfulness as “monitoring one’s present-moment experience with acceptance” (Creswell & Lindsay, 2014, p. 402). Remind students that although some people are more mindful than others, mindfulness levels fluctuate from month to month, week to week, and even minute to minute. Next, ask students to form pairs and discuss their responses to the following questions:

The second activity, titled “When Do We Need Mindfulness?,” urges students to think critically about when people will benefit the most from mindfulness training. Yes, mindfulness generally benefits physical and mental health. But Creswell and Lindsay (2014) are careful to point out that “mindfulness training interventions are unlikely to have much impact on health outcomes in low-stress participant groups” (p. 402).

To determine whether a mindfulness-training intervention will buffer people from illness, begin by reviewing the literature that links stressful relationships to reduced immune-system function (Jaremka, Glaser, Malarkey, & Kiecolt-Glaser, 2013). Instructors can then show students the following scenarios on PowerPoint slides:

Jamie and Mark have been married for 2 years. They have similar interests, enjoy spending time together, and resolve conflict healthfully. Unlike many of their friends, they still feel passionate love for each other. They rarely feel sick enough to take medicine or see a doctor.

Rebecca and Pat have dated for the past 5 years. They have known each other since childhood, but they don’t have much in common. Rebecca prefers quiet environments. Pat goes out with friends every weekend to dance clubs. Rebecca and Pat have awful arguments. Rebecca blames Pat for bringing home germs from clubs. She is sure that is why she always has a cold.

Andy and Daniel were recently married. They returned from their Caribbean honeymoon and completed all of the necessary paperwork to adopt their first child. They spend their weekends painting the baby’s room, watching movies, and planning the rest of their lives together. Daniel has always had severe allergies. He goes to the hospital twice a week to get allergy shots.

Mindfulness would not benefit the other couples because they are not in need of being buffered from stress. Mindfulness provides people with a sort of psychological Kevlar. In times of stress, people feel the urge to fight or flee. Mindfulness offers a healthy third option, in which people do no shy away from conflict or stress. Instead, they embrace it as another part of their daily experience. Protected against the downside of daily drudgery and stress, mindful people are free to flourish.

As social animals, people need people. Like our distant ancestors who lived, hunted, and found protection in groups, we need to belong. We flourish when socially connected in close relationships.

In epidemiological studies tracking thousands of lives over years, people have been at less risk for ill health and premature death when supported by close relationships. When Brigham Young University researchers aggregated data from 148 studies worldwide, they found that those with ample social connections had survival rates (across the average 7.5-year study period) about 50% greater than those with meager connections (Holt-Lunstad, Smith, & Layton, 2010). 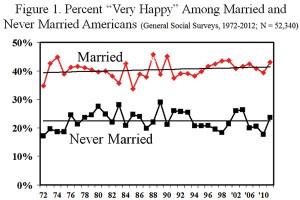 Marriage is the prototypical close relationship. Does it predict emotional and physical well-being? In the General Social Survey of Americans, since 1972, 40% of married adults have declared themselves “very happy,” as have 23% of never-married adults (Fig. 1).

Although marital status is a very strong happiness predictor, marital quality is an even better predictor. In the General Social Survey, nearly 6 in 10 people who rated their marriage as “very happy” assessed their lives as a whole as “very happy,” compared with only 12% of those with “pretty happy” marriages and 6% of those with “unhappy” marriages. Happy marriages predict happy lives, and miserable marriages predict miserable lives.

Does marital quality similarly predict physical well-being? Some well-publicized individual studies have hinted “yes.” George Vaillant (2002) found that at age 50, healthy aging was better predicted by a good marriage than by a low cholesterol level. On the flip side, in 32 studies of 6.5 million people, divorce has predicted poor health (Sbarra, Law, & Portley, 2011).

More evidence comes from a massive meta-analysis of all available research on the association between marital quality and physical health (Robles, Slatcher, Trombello, & McGinn, 2014), which Theodore Robles (2014) helpfully summarizes in plain English. The bottom line: The association, though modest, “is similar to that of associations between health behaviors (diet, physical activity) and health outcomes” (p. 427).

The finding holds across a variety of marriage-quality measures (both self-report and behavioral observation) and health measures (including self-report, physician ratings, and biological markers such as blood pressure and cholesterol).

But, instructors may ask, does an association (correlation) between marriage quality and health indicate that the former is causing the latter? Not necessarily. Given the impossibility of experimentally manipulating marriage quality, how would you know? Robles offers a clue: “In longitudinal studies, marital quality generally predicts [health], rather than the reverse” (p. 428).

An obvious follow-up question for class discussion is, “What factors might mediate and explain an effect of marital quality on health?”Students could surely brainstorm some of the possibilities that Robles identifies:

The dawn of same-sex marriage in most European countries and US states raises a final question for discussion. The studies cited above were conducted on opposite-sex couples. Will the seeming health benefits of marital quality observed in heterosexual marriages extend to gay marriages? Are there reasons to expect (or not expect) such?

APS Fellow David G. Myers is a professor of psychology at Hope College. His scientific writing has appeared in three dozen academic periodicals, and he has published 17 books, including Psychology (10th ed.), Exploring Psychology (9th ed.), and Social Psychology (11th ed.). Myers can be contacted via his website at www.davidmyers.org.