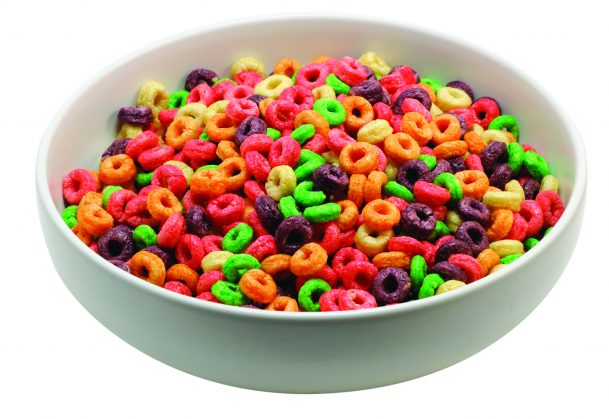 In the 1960s and ’70s, the prime time to advertise food to children was on Saturday mornings, when they perched themselves in front of the TV to watch cartoons. Today, with kids’ programming available almost continuously, children are bombarded with daily doses of food-related advertising. According to a 2013 study by Lisa M. Powell, as cited by the Robert Wood Johnson Foundation, “In 2011, children ages 2 to 11 saw about a dozen television ads each day for products typically high in saturated fat, sugar, or sodium.”

Approximately 33% of American children and adolescents ages 6–19 are considered overweight or obese, according to data from the 2009–2010 Centers for Disease Control National Health and Nutrition Examination Survey. To make matters worse, food marketers seem to have figured out how to effectively target this exact demographic by advertising directly to children (think of the cartoon characters on cereal boxes). According to a 2006 study by the National Academy of Science’s Committee on Food Marketing and the Diets of Children and Youth, the advertisers spend more than $10 billion per year marketing directly to children, promoting many foods high in calories, sugar, salt, and fat and low in nutrients key to children’s development. The committee found strong evidence that television advertising in particular affects the food and beverage preferences of children ages 2–11.

And research suggests that children, specifically those who are overweight or obese, are especially affected by food packaging and advertising. Psychological scientists who have been ramping up research on the subject are addressing key questions about what appeals to these children — and how we can help them stay healthy.

Available data clearly show that children are a key demographic for food advertising. But does this increased emphasis on catering to children’s appetites work? Research from psychological scientists suggests it does.

According to a 2009 study conducted by Jennifer L. Harris at the Yale Rudd Center for Food Policy and Obesity and APS Fellows John A. Bargh and Kelly D. Brownell, children ate 45% more snack foods when they watched television programming with food advertising than when they watched programming without it. Across two studies, “food advertising that promoted snacking, fun, happiness, and excitement (i.e., the majority of children’s food advertisements) directly contributed to increased food intake,” the authors wrote. The finding appears to counter advertisers’ claims that such marketing affects only brand choice and not overall consumption.

The Internet is prime territory for children’s advertising as well. A 2012 study also from the Rudd Center showed that children who played “advergames” — defined by the researchers as “fun, interactive games and other user-directed activities featuring individual products or brands” — ate 56% more of those foods than children who played Dole fruit and vegetable advergames. Every month, an estimated 1.2 million children visit these sites, most of which promote food like candy and high-sugar cereals. They spend as much as an hour on a site.

Food Advertising on a Neural Level

Recent research suggests that these food marketing tactics may actually be changing the way children perceive and process food-related stimuli, which might be contributing to rising levels of obesity.

A 2013 study published in The Journal of Pediatrics tied the effects of food marketing to children’s obesity rates. Psychological scientist Amanda S. Bruce (University of Kansas Medical Center; Children’s Mercy Hospital) and colleagues examined 10 children of healthy weight and 10 obese children, ages 10–14, to see what impact viewing food logos would have on their brains. Using both self-reports of self-control and fMRI scans, the researchers found that, when shown food logos, the obese children had less activation in the self-control areas of their brains and reported greater levels of impulsivity than did their healthy-weight counterparts. 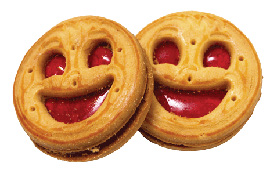 The study’s results suggest a vicious cycle when it comes to children, food marketing, and weight: Overweight children are more likely to remain so — and pack on even more pounds — than their healthy peers.

“This study provides preliminary evidence that obese children may be more vulnerable to the effects of food advertising. One of the keys to improving health-related decision-making may be found in the ability to improve self-control,” wrote Bruce. She suggested that adding self-control training to physical and psychological weight-loss interventions could generate higher rates of success for overweight and obese children.

A longitudinal study from the Oregon Research Institute (ORI) suggests this trend is not unique to static food logos or young children — it also carries over into food-related television commercials and a slightly older population. Using fMRI scans just as the University of Kansas Medical Center researchers did, psychological scientists Sonja Yokum and Eric Stice from the ORI collaborated with researchers from the University of Michigan, the Yale Rudd Center for Food Policy and Obesity, and Duke University to examine the brains of 30 adolescents (14–17 years old) while they watched a television show containing 20 food-related commercials and 20 nonfood-related commercials. Those whose brains showed higher reward activation during the food-related commercials gained more weight in the following year than those whose brains showed less activation.

Since adults hold the purse strings, food advertisers work hard to cater to them, too. Although parents might think they’re more capable of making healthy choices than their children, they are still prone to misleading marketing tactics.

Temple Northup (University of Houston) conducted a 2014 study showing that loading food labels with words implying healthiness — such as “whole grain,” “antioxidant,” or “organic” — can instill in consumers the belief that those foods are healthier than products lacking such descriptors, even if that isn’t the case.

To test this theory, the researcher created an online survey that showed 318 study participants two versions of photographs depicting various foods and drinks: the original version with a “healthy” food label, and a version with the healthy word Photoshopped out. 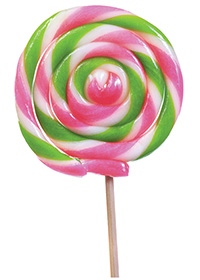 These examples included Chef Boyardee Beefaroni (“Whole Grain”), Chocolate Cheerios (“Heart Healthy”), and Cherry 7-Up (“Antioxidant”). After participants had seen both photos, Northup asked them which they thought was healthier; across the board, the viewers rated the original (e.g., “healthier”) version as better for them.

“Words like ‘organic,’ ‘antioxidant,’ ‘natural,’ and ‘gluten-free’ imply some sort of healthy benefit,” wrote Northup. “When people stop to think about it, there’s nothing healthy about Antioxidant Cherry 7-Up — it’s mostly filled with high fructose syrup or sugar. But its name is giving you this clue that there is some sort of health benefit to something that is not healthy at all.”

A 2011 study by researchers at the Rudd Center asked parents to view images of existing children’s cereal box fronts that included health claims such as “supports your child’s immunity” through antioxidants and vitamins. The researchers had chosen the least nutritious cereals that included such claims, but the parents mistakenly inferred those cereals were more nutritious than others and had far-reaching health benefits, such as strengthening bones or increasing immunity to sickness. Parents were therefore more likely to buy the cereals that were merely advertised as healthy, although the researchers found they were actually “below average in overall nutritional quality according to the nutrient profiling model.” These results offer another example of how food marketers appeal to parents’ desire to make healthy food choices for their children, though in reality their selections may be far from nutritional.

The following paragraphs describe a study by Wansink, Just, Payne, and Klinger (2012) that was retracted in 2018, after the publication of this story. You can read the full Retraction Notice online.

In the first study, Wansink and colleagues added carrots to the lunch menus of five schools, testing 147 students ages 8–11 for 3 consecutive days. On the first and last days, the carrots were simply included on the menus with no extra information; on the middle day, they were billed as either “X-ray Vision Carrots” or “Food of the Day.” The researchers found that, although the amount of carrots the children selected remained constant, the amount they actually consumed changed drastically. Kids ate 32% of the “Food of the Day”-labeled carrots, 35% of the unnamed carrots — and 66% of the “X-ray Vision Carrots.”

In the second study, the authors again used the moniker “X-ray Vision Carrots,” billed broccoli as “Power Punch Broccoli” and “Tiny Tasty Tree Tops,” and dubbed green beans “Silly Dilly Green Beans,” this time examining food sales to 1,552 students in two schools over 2 months. Although both schools’ lunch menus referred to the vegetables by their usual names for the first month, one school switched to the more enticing names for the second month. The results were extreme: In the experimental school, sales of the vegetables increased 99%, while in the control school, sales declined 16%.

These results suggest health-centered food marketing can work just as well as junk-food advertising when presented in a way that appeals to its audience. If implemented broadly, this simple, no-cost strategy could have implications for healthy food consumption in children and potentially in adults.

Regulatory bodies also are attempting to help consumers better understand and monitor what they eat by simplifying nutrition labels to provide greater clarity about nutrition content. In 2013, the Food and Drug Administration (FDA) commissioned research on the effects of nutritional-label changes designed to help consumers more easily understand what exactly they were getting when they bought a certain food. FDA officials tested these changes on more than 9,000 online-study participants by asking them to evaluate nine modified nutritional labels and the current nutrition labels of four fake products. They split the labels into three groups: a single column showing information for products with two servings per container; a two-column format showing information for products with two servings per container; and a single column showing information for products as a single, large serving. They found that participants were able to more accurately assess nutritional information such as calories and amount of fat or other nutrients using either a single, large serving per container format or a two-column design.

“This research is just one step in understanding how some potential food label modifications might help consumers make better decisions,” noted researcher Serena Lo in a statement issued by the FDA.

Mariko Hewer is the content and communications coordinator at the Association for Psychological Science. She can be contacted at apsobserver@psychologicalscience.org.