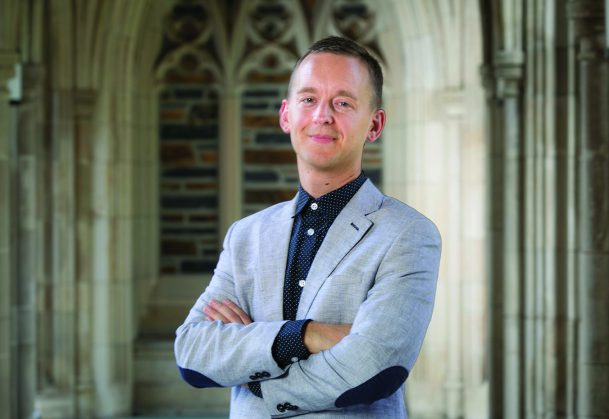 It’s not often you hear undergraduate students studying statistics described as “surprised and enthusiastic,” yet that’s just how Gregory Samanez-Larkin, assistant professor of psychology and neuroscience at Duke University, says his students reacted to a semester-long project on health and well-being. Using FitBits to track real-world activity, the professor and his students were able to gather valuable personal data that they could anonymously incorporate into their classwork.

“They seemed excited to have the opportunity to actively apply the course content to data that would have just been intrinsically interesting for them to monitor without any formal analysis,” Samanez-Larkin said.

Although the devices were originally meant for other research in his lab within the Department of Psychology and Neuroscience and the Duke Institute for Brain Sciences, the psychological scientist came up with a creative way to use them to get his students engaged with the often dense material covered in statistics classes.

“I personally don’t learn things well unless I care about them,” he said. “Using data that most students cared about — and was so personal — seemed to be motivating.”

Samanez-Larkin was able to parlay that motivation into classroom activities that went beyond traditional homework assignments.

“Students generated the data, creatively generated research questions, identified appropriate statistical tests, wrote up the results as they would be reported in a formal research paper, and identified limitations of the data, analyses, and study in general,” he explained. “This project helped them achieve everything I hoped they could get out of this course.”

In particular, Samanez-Larkin found interesting effects centered on sleep variability and grades. He had students analyze these data for their final exam, which was in the format of an article that might be submitted to a journal in the future. After circulating an introduction and method section before the test, the psychological scientist had students write results and discussion sections based on their analyses. The students are now refining and combining their responses and writing an introduction, even though the class has ended.

“We will submit this as a manuscript with every student in the class as a coauthor — maybe even to an APS journal,” Samanez-Larkin explained.

Students also were allowed to keep their FitBits if they wore them 95% of the time — a goal 70% of them achieved. In addition to being a nice perk for those participating in the class, Samanez-Larkin said, this helped create a greater awareness of physical health and well-being, which are major foci of his lab.

“I randomly passed a student on campus one day on the phone who stopped and said, ‘I’m telling my mom about our FitBit project right now!’” he noted. “The spread of this outside the classroom to family members was especially rewarding for me since my own lab is doing new work trying to motivate physical activity in middle age to improve brain health in old age.”

This kind of transferrable knowledge can be beneficial to both younger and older generations, Samanez-Larkin said. “Learning about neurobiological aging can be depressing for young people — it was for me when I was 19 — but learning about effective interventions is empowering and makes people more optimistic about old age. I was so stoked to hear that students were spontaneously engaging their middle-aged parents in activity monitoring.”

The class may be over now, but the professor’s work with the fitness gadgets is not. His current research involves motivating adults to stay physically active as they age.

“We’ve run a few initial studies examining associations between daily activity and brain health in older age (e.g., bit.ly/2IiTkfp), but now we’re moving on to interventions,” the psychological scientist said. “We’re trying to optimize messaging using a neuromarketing-like approach to see if we can enhance the effectiveness of motivational content being used in digital health interventions.”

Would like more info on Fitbit study; aging, dementia, sleep, exercise and possibly depression and anxiety

Interesting article aligned to my research interests too. However, use by “normal” college students should be extended to cognitively compromised children, young adults, and older persons. The latter, in my view, may be the most non-compliant. Even so, the feedback that a smart-device can provide this cohort can serve as an inducement to wear the device at least 95% of the time. I have personally found continuous wearing to be problematic even though the smartwatch is water-resistant and able to withstand the pressure of up to fifty meters in an open body of water. Collection of data for participants can help manufacturers, researchers, and participants further engage in this area of health as well as advance psychological science in several areas such as mental and physical health, algorithm development, ergonomics and consumer technology.

Psychological scientists looking to apply for funding from the US National Science Foundation may be interested in upcoming 2021 deadlines. More