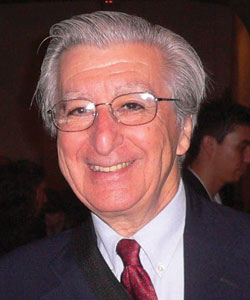 APS Fellow Lewis Lipsitt received the Vincent De Francis Award at the American Humane Association’s 18th National Conference on Child Abuse and Neglect in Washington, DC. Lipsitt is Professor Emeritus of Psychology, Medical Science, and Human Development at Brown University, where he also served as founding director of the Child Study Center from 1967 to 1991.

The Vincent De Francis Award, which recognizes extraordinary achievements in the field of child welfare, recognizes Lipsitt’s lifetime achievements on behalf of children, including research, leadership, and advocacy. Lipsitt’s research has addressed memory, learning, perception, prenatal risk, crib death, suicide, and other life-threatening issues faced by children.  He is also known for publicizing the threats posed by behavioral misadventures, which cause more deaths and injuries among young people than all diseases combined.

Served in Air Force with him during early 50’s. He had the respect of all of us especially our C.O., Col. Dr. Jensen. He would have been a joy to work with as a leader at Brown – Briliant, funny, loyal, caring, supportive and sharing.

I knew him briefly during my time at Brown and I think of him every time I read anything on present-day SIDS research. Tommy Trites sings a wonderful song in tribute to a friend’s son, Emmanuel Wannamaker, who died of SIDS last June (posted on FB to “Truckers Worldwide Got Talent”). Every time I hear this song, I think of Prof Lipsitt and hope that he’s heard it, too.