When it comes to pseudoscience, social psychologist and writer Carol A. Tavris is a self-appointed curmudgeon.

“I have spent many years lobbing hand grenades at psychobabble — that wonderful assortment of pop psych ideas that permeate our culture in spite of having no means of empirical support,” said Tavris at the 24th APS Annual Convention.“Today, however, we face an even greater challenge because in this era of the medical-pharmaceutical-industrial complex, where psychobabble goes, can biobunk be far behind?”

In her APS-David Myers Distinguished Lecture on the Science and Craft of Teaching Psychology, Tavris showed how “biobunk” has been perpetuated in neuroscience. 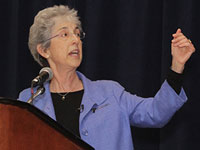 Carol A. Tavris is on a mission to root out substandard science.

“Nonexperts really love bad explanations from neuroscience,” she said. Consider the way that the fast-evolving technology in brain-imaging techniques have practically hypnotized laypeople — especially journalists — with stunning images. Unfortunately, appreciation for the images is not usually accompanied by any critical thinking about what the colors in those pictures actually mean. Still, Tavris said, “Many people regard evidence from brain images as being more ‘real’ than other types of psychological information.”

According to Tavris, the public’s preference for “neat” biological explanations over “messy” psychological rationale has led scientists to search for genes that explain behaviors, the development of psychopharmaceuticals, and the development of numerous diagnostic screens that physicians can use to screen for mental disorders.

Not every aspect of this “biomedical revolution,” as Tavris calls it, is unwelcome. She admitted that she gets very excited about many of these discoveries. What she takes issue with is the perception that biomedical explanations are infallible. Similar to the psychobabble that plagues psychological science, “brainless neuroscience” should be giving the field an image problem, but because most people don’t know how to spot biobunk, they are more willing to accept bad neuroscience findings over good psychological ones.

So Tavris dedicated the rest of her talk to sharing four surefire ways to spot the biobunk that underlies what she refers to as “pseudoneuroscience.”

Also called “the technology knows more than I do” phenomenon. Just because a technology sounds impressive, said Tavris, doesn’t mean the science you can do with it is substantive. She cited an fMRI study on posttraumatic stress disorder (PTSD) in which the authors concluded that PTSD is a brain disease and concrete proof of human suffering. Tavris said, “If we can’t recognize human suffering without an fMRI, we are technomyopic indeed.”

Questionable methods are a sure sign of pseudoneuroscience. Statistical problems and artifacts are often hidden behind flashy findings. Imaging studies are one of the most common culprits, Tavris pointed out, because researchers don’t always apply appropriate statistical analyses to correct for artifacts in their data. To show how susceptible brain imaging is to artifacts, Tavris showed how one research group performed an fMRI on a dead salmon, and — to their surprise — found that the fish had brain activity. “When they did the proper statistical analyses,” she said. “They found that the salmon was, in fact, dead.”

Reductionism is popular in pseudoneuroscience because people tend to appreciate simple answers to questions. Be wary of conclusions that seem too neat and simple. For example, Tavris recalled how oxytocin was quickly declared the “cuddle hormone” when researchers found that it had a role in social bonding between people. But additional research demonstrated that oxytocin leads people to feel more connected to their in group, and less connected to others, suggesting that oxytocin’s role in the social bonding is more complex than most people are led to believe.

Watch out for hype and overselling. Often “neuromarketers” will hawk impressive sounding devices or treatments to desperate parents, students, and teachers that are backed by questionable science. In a similar fashion, some police and lawyers will oversell the capabilities of polygraph devices or fMRI results to induce confessions or to bamboozle a jury.

Overall, Tavris believes the focus on explaining behavioral phenomena with biology alone is too narrow. Take the search for a female equivalent of Viagra, she said. It was a huge flop because researchers assumed that women only had a biological problem underlying their sexual dysfunction. But for many women, emotional state and environment also contribute to the problem. People may prefer simple, biological answers, but that doesn’t change the fact that sometimes solutions are just as complex as the problems they’re attempting to solve.

“We can strive to remind the public that biology has much to contribute to the human story,” she said. “But it is only a piece of the narrative.”

What is this woman talking about!?

I agree with the first clause but the second is delusional. “Psychological rationale” is not only messy, it is largely stipulative nonsense of the sort that make behaviorism appear, in retrospect, like a reasonable response.

Travis recipe sounds like a by-numbers portrait of psychological science.

Psychological neuroscience and behavioral genetics have become the Freudian psychoanalytic and behaviorist movement of the 21st century.