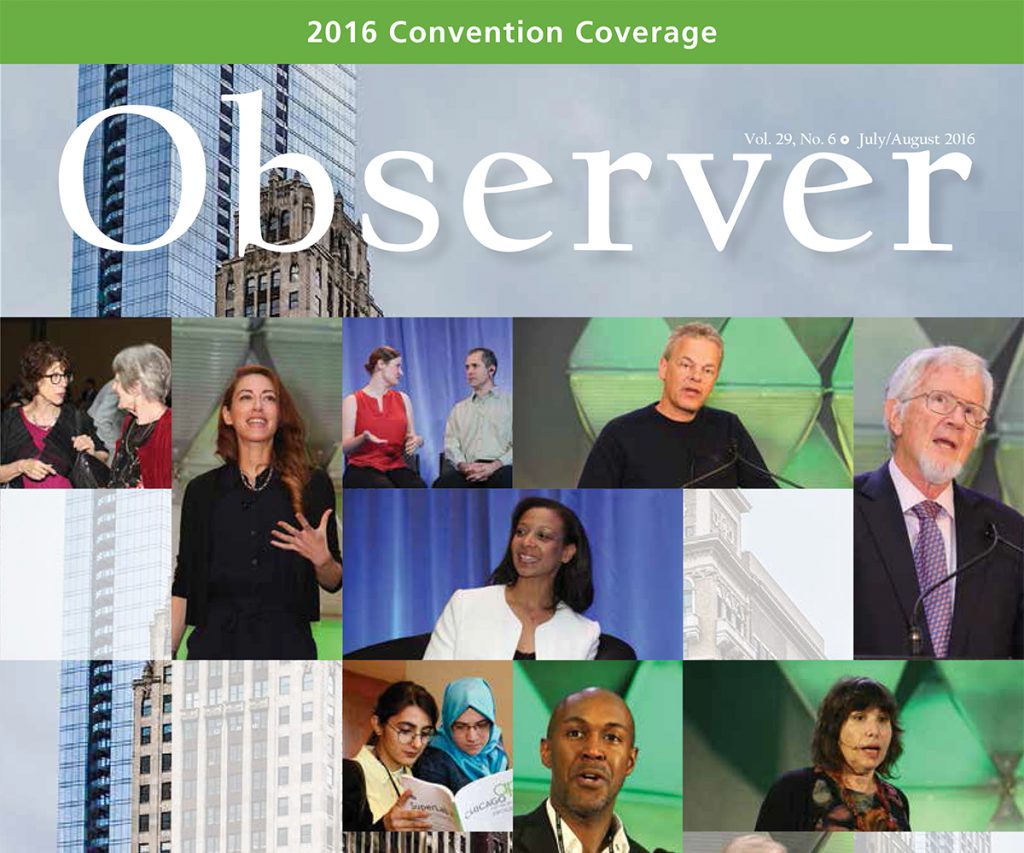 Nearly 70 years ago, psychological scientist Edward Tolman introduced the idea that humans and other animals have a “cognitive map” that allows them to navigate their everyday spatial environments. Evidence of physical processes underpinning cognitive maps emerged in 1971 with breakthrough research based on recorded brain activity in freely moving rats. Findings from this research showed that most hippocampal cells were “place cells,” firing off as the rats entered specific locations.

Norwegian psychologist and neuroscientist Edvard Moser is striving to expand our understanding of how the brain creates these place responses and how neurons associated with these processes operate. In 2005, Moser, his colleague and spouse May-Britt Moser, and three of their students discovered “grid cells,” a type of neuron found in the brains of many species that allows them to understand their position in space.

Moser was one of four distinguished scientists featured in the Presidential Symposium “The Cognitive Map,” hosted by APS President C. Randy Gallistel at the 2016 APS Annual Convention in Chicago. Two years ago, he, May-Britt, and their former mentor, neuroscientist John O’Keefe, were awarded the Nobel Prize in Physiology or Medicine for their work related to the identification of the cells that constitute the brain’s positioning system.

Moser discussed his research connected to grid cells as well as research conducted by his group on the role played by various hippocampal cells that are used by animals to navigate their environments, including “head-direction cells,” “border cells,” and “speed cells.” Moser noted that these cells are present in bats, monkeys, and rats, as well as in humans, suggesting that they originated early in mammalian evolution and that “the spatial system is wired up quite similarly in all mammals.”

Moser said the research on these cells as well as on their functioning and the patterns associated with them has shown significant progress since Tolman first introduced the concept of a cognitive map.

“The field has developed to the point where we actually have ideas about how these patterns can arise and maybe how they can even be used for a rat to find its way in the environment,” Moser said. “That is a significant development, because for most other cognitive functions we have no clue about how this happens at the level of thousands of interacting neurons.”

APS Fellow Russell A. Epstein of the University of Pennsylvania presented research showing that neurobiological mechanisms in the hippocampal and medial parietal regions of the brain allow navigators to reestablish their cognitive maps when they become disoriented. Epstein, a cognitive neuroscientist, cited evidence suggesting that animals and humans use the geometric features of an environment when trying to reorient themselves.

Epstein presented findings from his research on mice and humans investigating the neural basis of spatial reorientation. He described how the medial parietal region processes the geometric shape of the environment and how this geometric information is used to align the hippocampal map. This allows the hippocampal place cells to fire in the correct locations, even after disorientation.

“These data indicate that geometry is a very powerful cue for spatial reorientation,” he said.

The Dance of Bees

APS Fellow Randolf Menzel, a neurobiologist at the Freie Universität Berlin in Germany, showed how technology has been used to provide evidence of a cognitive map among honeybees, who use their distinctive “waggle dance” to communicate information to one another about the locations of food, water sources, and nesting sites.

Menzel discussed his research in which harmonic radars showed that honeybees have cognitive maps. He explained how these radars traced the movement of bees to provide evidence of their map-like spatial memory for the information communicated to them through the waggle dance.

Although the waggle dance had been described by acclaimed ethologist and Nobel laureate Karl von Frisch as early as the 1930s, there had been no solid evidence that bees were actually learning and using this information until Menzel’s experiments.

“For Frisch it was difficult to prove that the animals surrounding this dancing bee were indeed learning from the [bee] where to fly, in which direction, and over which distance,” Menzel said. In his experiment, radars were used to track marked bees to “see how well they followed the communication they received,” he said. He also provided evidence that dance-following bees expect particular landscape structures on the way toward the indicated location.

Menzel said the data based on his own research suggest that honeybees have the capacity for strong spatial memory — something of critical importance, given that they travel long distances in search of food sources and nest sites. Bees start developing the memory needed to find their way when they are young, fresh out of the colony for the first time, and beginning to engage in numerous explorations for food, water, and nest sites, he explained.

“At the end of these explorations, they have established a form of memory about the landscape best conceptualized as a cognitive map,” Menzel said.

Although everyone has a cognitive map, individuals differ in the way they perceive their spatial environments and in the language they use to describe or communicate about these spaces, according to APS Fellow Barbara G. Tversky of Columbia University. Tversky discussed cognitive maps in terms of how our judgments of spatial relations reveal aspects of cognitive, social, and emotional functioning.

“These spaces are conceived differently depending on our perception and interaction with them,” Tversky said. “In judgments we bring together what seems relevant — in particular the overriding structures. These are imprecise and perhaps incoherent, so we suggest that the cognitive maps are perhaps more like cognitive collages.”

The “overriding structures” referred to by Tversky provide a frame of reference that may lead people to make errors in their perceptions of the larger physical environment. In her research, Tversky has described how the frame of reference people use results in their erroneously viewing the relative positions of various geographical locations and incorrectly judging ordinary buildings as being in closer proximity to landmarks than vice versa. 

Eric Houston is an assistant professor of psychology at Lewis College of Human Sciences at Illinois Institute of Technology. He can be reached at apsobserver@psychologicalscience.org.