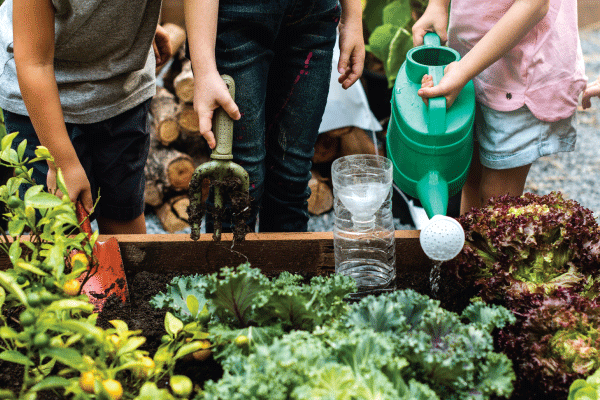 Clad in rain jackets and rubber boots, the preschoolers frolic along the muddy trails of Vashon Island in Puget Sound, reciting the alphabet as they wade through puddles and climb trees. They are students of the Cedarsong Nature School, co-founded by the late naturalist and educator Erin Kenny.

The scene is depicted in a YouTube video Cedarsong released in 2018, a few months before cancer took Kenny’s life. An advocate for outdoor learning, Kenny believed that kids learn spontaneously through walks in nature. Her motto for the school was: “Children cannot bounce off the walls if we take away the walls.”

Numerous studies have linked green space with lower levels of behavioral problems and attention deficits in children, even controlling for a variety of demographic, socioeconomic, and environmental factors.

Science backs up Kenny’s philosophy. Numerous findings point to trees, brooks, and fields as fuel for children’s intelligence and mental health. But while some children can easily enjoy a day in the park, if not an all-outdoor school, others live in crowded housing and neighborhoods beset by poverty and neglect. While some attend school on bucolic campuses, others struggle to learn in packed, noisy classrooms.

Those surroundings have profound effects on children’s cognition and emotions, but social science has largely overlooked those factors, says APS Fellow Gary W. Evans, who studies developmental and environmental psychology at Cornell University.

“In psychology, ‘environment’ usually refers to social conditions, ignoring the physical properties of the settings and objects people interact with,” Evans, a 2013 Guggenheim Fellow, wrote in a recent article for Current Directions in Psychological Science. “One consequence is a relatively underdeveloped understanding of how properties of physical surroundings and objects contribute to child development.”

Research examining the effects of physical settings on children has historically suffered from methodological shortcomings, Evans wrote. But increasing scientific rigor has produced solid evidence of the influence that setting and atmosphere have on children’s learning and behavior.

Research on children and their material environment emanates from APS James McKeen Cattell Fellow Urie Bronfenbrenner’s classic ecological systems theory, which called attention to the interaction between the individual and the environment. Bronfenbrenner’s model spurred Evans and other scientists to explore the impact of household chaos on children. He and other social scientists have characterized chaos as noise, crowding, disorder, and instability.

Many studies on the effects of environmental mayhem utilize the Confusion, Hubbub, and Order Scale (CHAOS) developed by APS Fellow Adam P. Matheny (University of Louisville), Theodore D. Wachs, Jennifer L. Ludwig (Purdue University), and Kay Phillips (University of Louisville). The scale assesses perceptions of routine, noise, and general confusion in the home. Participants rate their level of agreement with statements such as “You can’t hear yourself think in our home” and “We can find things when we need them.” Longitudinal studies employing CHAOS have linked chaotic homes with behavior and attention problems (Doan & Evans, 2020).

A 2009 study involving more than 300 families with same-sex twins stands as an example. A team of psychological researchers led by APS Fellow Kirby Deater-Deckard (University of Massachusetts Amherst) had parents complete a short version of CHAOS and assessed the families and households on a variety of factors, including household conditions such as dirt and clutter. They found lower IQs and heightened conduct problems among children living in chaotic households.

The most extensive studies combining environmental and developmental psychology date back 50 years and focused on the effects of ambient noise in the spaces that children occupy. Among them was environmental psychologist Arline L. Bronzaft’s famous 1975 study at a New York City elementary school near an elevated train track. She found that train noise penetrated one side of the school, where students had lower standardized test scores compared with their peers in classrooms on the quieter side of the building. The train noise was so loud the teachers had to stop talking, resulting in a 10% reduction in teaching time. After the school installed substantial sound buffers, those differences in student performance disappeared.

Evans and colleagues Monika Bullinger (University of Hamburg) and Staffan Hygge (University of Gävle, Sweden) have demonstrated the effects of noise on children’s cognition, as well as their stress levels. Their work began in the 1990s in Munich, where one international airport closed down and a new one opened at a different location. They tested children living near both sites at different times and found that children exposed to aircraft noise showed cognitive deficits and elevated stress biomarkers. They also found that children living near the old airport showed cognitive improvements after it closed.

It takes far less than the roar of a train or aircraft to affect children’s attention and learning. In a study published in 2018, researchers Bo Zhang and Regina Navejar (University of Wisconsin, Milwaukee) tracked 22 teenagers’ reactions to typical background noise in their urban high school. In more than 250 tests over 2 days, the researchers measured the average noise level in the schools to be double to triple the recommended limit for classes. Forty percent of the students reported being disturbed by noises ranging from slamming doors to hallway chatter. And the more students reported being bothered by the noise, the lower their scores on math tests. Other studies have linked chronic noise to reading deficits.

“If you were to ask most public health researchers about noise, they’re going to talk about hearing loss,” Evans said in an interview with the Observer. “That’s important, but the level of noise it takes to produce hearing damage is so much greater than the level it takes to produce reading deficits.”

Low-income families who struggle to find safe, stable, and affordable housing face their own forms of home chaos. Rebekah Levine Coley, a professor of developmental and educational psychology at Boston College, documented the toll that housing instability takes on kids by tapping into a longitudinal sample of children, adolescents, and young adults from low-income neighborhoods in Boston, Chicago, and San Antonio. She and her colleagues found that children who grow up in homes with vermin, leaking roofs, broken windows, and other forms of disrepair experience heightened emotional and behavioral problems beginning at young ages and lower reading and math skills in adolescence (Coley et al., 2013).

Visual clutter has an impact well beyond the home and doesn’t have to take the form of blight. Psychological researchers at Carnegie Mellon University found that children in highly decorated classrooms became more distracted and showed smaller learning gains compared with those in an unadorned classroom setting. For the study, 24 kindergarten students were placed in laboratory classrooms for six introductory science lessons. Three lessons were taught in a classroom adorned with lots of posters, maps, and artwork, and three lessons were given in a sparsely decorated room. The results showed that although children learned in both classroom types, they learned more—and better stayed on task—when the room lacked extensive décor (Fisher et al., 2014).

The effects of other physical elements, such as neighborhood conditions, leisure spaces, and weather, have received less attention in psychological research, Evans said. But evidence suggests that urban environments are harsh on some children. An international team of scientists that included APS Fellows Avshalom Caspi and Terrie E. Moffit (Duke University) tapped the Environmental Risk (E-Risk) Longitudinal Twin Study, which tracked more than 2,200 twins in the United Kingdom from birth to age 12. They assessed children’s psychological state at age 12 through in-home interviews. They also collected data from residential surveys, government records, and satellite images, examining such factors as crime, neighborhood cohesion, and disorder in the form of graffiti, vandalism, and noise. As reported in a 2016 article, the researchers found that 7.4% of children in urban neighborhoods had experienced at least one psychotic symptom by age 12—nearly twice the prevalence found among children in suburban and rural areas. The results held when the scientists controlled for socioeconomic status and family psychiatric history (Newbury et al., 2016).

The forces of nature

Numerous studies have linked green space with lower levels of behavioral problems and attention deficits in children. A 2016 multidisciplinary study measured levels of aggression in a cohort of 1,287 twins and triplets ages 9 to 18 in Southern California. The researchers employed satellite imagery to measure neighborhood green space such as parks, gardens, and tree-lined streets. They discovered that children living near green space showed reduced aggressive behavior. Those findings held even when the authors controlled for a variety of demographic, socioeconomic, and environmental factors (Young et al., 2016).

Public health analyses have also indicated that children living in greener urban environments have higher IQ scores than their peers who lack exposure to nature. In Spain, a team of 19 scientists from the fields of psychology, medicine, and epidemiology incorporated satellite images into their longitudinal research and found that children residing in homes with more surrounding green space scored better on computerized attention tests at ages 4, 5, and 7 (Dadvand et al., 2019). And a recently published meta-analysis found that spending time in nature boosts children’s academic achievement (Kuo et al., 2019). The multidisciplinary research team, which included neuropsychologist Catherine Jordan of the University of Minnesota, found that nature improves attention, relieves stress, bolsters self-discipline and motivation, and fosters cooperation among students.

Exposure to nature appears to have lasting effects. Numerous studies have shown that environmentally responsible adults had a history of spending substantial time in nature as children.

Overall, psychological science is building a strong case for addressing the physical environment in policies and interventions developed for children at risk for psychological problems. Those interventions need to be comprehensive, given that home and school conditions affect adults as well as the children they care for. One reason that children in noisy neighborhoods show language deficits, after all, is because it’s simply difficult for them to hear their parents talk.

“The primary intervention for dealing with poverty and environmental issues in the U.S. has been individually based—for example, parenting,” Evans said. “What I’m struck by is that usually ignores the fact that the parent is in the same environment as well.”

Scott Sleek is a freelance writer in Silver Spring, Maryland, and the former Director of News and Information at APS.

Is there a developmental period when the brain is especially receptive to musical training? More