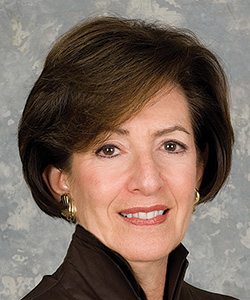 Ellen Frank has been recognized internationally for her clinical research on the assessment and treatment of mood disorders, including the creation of interpersonal and social rhythm therapy (IPSRT), a psychotherapy treatment that has been proven effective in preventing and reducing the recurrence of the symptoms of bipolar disorder. Frank, a 2015 recipient of the James McKeen Cattell Fellow Award, will deliver her award address at the 27th APS Annual Convention, May 21–24, in New York City.

Frank is Distinguished Professor of Psychiatry and Professor of Psychology at the University of Pittsburgh School of Medicine and the director of the Depression and Manic Depression Prevention Program. She has been principal investigator on multiple research programs evaluating the effectiveness of psychotherapy and medication interventions in patients with mood disorders.

Frank and her colleagues developed and tested a series of adaptations of interpersonal psychotherapy (IPT) including maintenance IPT, brief IPT, and IPSRT. She originally designed IPSRT as a treatment for bipolar disorder to be administered as an individual psychotherapy, to be used adjunctively with medication. She and her colleagues have now adapted it for both group and individual treatment of both bipolar and unipolar disorders.

Working with researchers at the University of Pisa, Italy, Frank also developed a series of assessment instruments for the systematic evaluation of subsyndromal mood and anxiety conditions and has now studied the impact of these subsyndromal presentations on treatment outcome in unipolar depression. She is currently completing a study with David Kupfer on reducing medical risk among patients with bipolar I disorder. All of the treatment trials carried out in her laboratory, including this most recent one, have been notable for the inclusion of psychobiologic moderators and mediators, particularly those related to sleep/wake and circadian function.

Frank has served as the chair of the Food and Drug Administration Psychopharmacologic Drugs Advisory Panel and as a member of the National Advisory Mental Health Council. As a leading researcher in the diagnosis, biological and psychosocial correlates, and treatment of mood disorders, Frank has published over 400 peer-reviewed papers and has served on the Mood Disorders Workgroup of the American Psychiatric Association Task Force on DSM-5. In 1999, Frank was elected to the National Academy of Sciences Institute of Medicine.