Changing Behavior for a Changing Climate 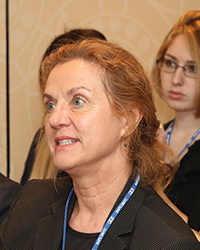 Climate change is one of the most profound global crises of the 21st century‚ but a large percentage of the world population seems blithe about its implications or even dismissive of its existence. In a symposium titled “Psychological Responses to Climate Change,” chaired by Past APS Board Member Elke U. Weber (Columbia University) and APS Fellow David V. Budescu (Fordham University), scientists discussed their research into people’s attitudes and actions related to climatic instability. Presenters said the findings uncover some possible messages that can motivate people to adopt “green” behaviors that can mitigate greenhouse gases and other environmental dangers.

Survey research shared at the symposium suggests that people may be more responsive to the climate change if it’s connected with clear threats such as hurricanes and floods — even more so when they’ve actually experienced those types of phenomena. And psychological researcher Lisa Zaval of Columbia University shared a study, published earlier this year in Psychological Science, showing that participants in a lab study reported a heightened responsibility to engage in proenvironmental behaviors when they were induced to think about the legacy they want to leave.

One study led by Budescu focused on ideological leanings and the differences in framing the issue as “global warming” versus “climate change.” With data collected from more than 450 Americans, Budescu and colleagues found significant framing effects only for political independents and for those who are disengaged from climate change issues. In fact, they found the strongest effects for people whose beliefs are inconsistent with their political identity.

“We believe disposition-based classifiers, like belief profiles, are better predictors of proenvironmental intentions than identity-based classifiers, like party affiliation,” said graduate student Daniel Benjamin, who worked with Budescu and Han-Hui Por on the study. “And we recommend tailoring communications to moderates as they seem to be the most susceptible to messaging.”

Serving as discussant for the symposium, APS Fellow Thomas S. Wallsten of University of Maryland, College Park, said he’d like to see studies that combine both experimental and survey results to measure the psychological reactions to climate change. Wallsten also emphasized the importance that psychological science plays in public policy around the issue. 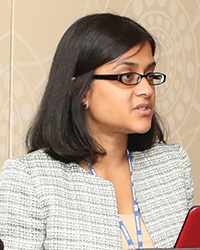 Cognitive behavioral therapy (CBT), a proven treatment for anxiety, depression, and related disorders, often doesn’t reach the people who need it. Through CBT, patients use targeted practice to change destructive thought patterns and behaviors. Yet cost, stigma, and a lack of trained mental-health providers stop many individuals who could benefit from CBT from accessing it.

Patel is implementing a 10-week, Internet-based cognitive behavioral therapy (I-CBT) program for the treatment of obsessive-compulsive disorder (OCD). The I-CBT program was originally developed at the Karolinska Institutet in Sweden; Patel and her colleagues have modified the treatment for patients in New York and are in the process of testing its feasibility and effectiveness. “Of the 13 individuals that have completed the treatment, 75% of our sample shows an improvement in their OCD symptoms, with 50% achieving treatment response,” Patel reported.

Other symposium presenters included David Tolin, who discussed stepped care for OCD, including bibliotherapy (i.e., delivering CBT via a book). Shari Steinman and Meg Reuland each presented findings related to a computerized intervention called Cognitive Bias Modification for Interpretations, which trains users to interpret ambiguous information in a positive rather than negative way — a skill that has been shown to reduce anxiety and depression.

Our attitudes and stereotypes unconsciously influence our thinking. The ubiquity of this phenomenon, called implicit bias, has been well established by empirical evidence. Now, researchers have set their sights on finding ways to combat these seemingly intransigent subconscious beliefs.

Previous studies have established that our brains can be “tricked” into identifying another body as our own under certain sensory parameters, such as in the use of virtual-reality technology. Slater presented evidence showing that being virtually embodied as an outgroup member (i.e., a White person whose virtual persona is a Black person) can reduce implicit bias against members of that outgroup in a follow-up Implicit Association Test (IAT; a tool that measures unconscious bias) 1 week after their virtual-body exposure. Tsakiris and Kubota also showed changes in the ways certain brain areas respond to stereotypes following manipulations that reduce implicit biases.

“[Virtual reality] technology is bringing into psychology something we’ve never experienced before,” remarked the symposium’s discussant, APS Past President Mahzarin R. Banaji, Harvard University, who was one of the original designers of the IAT. “Our brains evolved in a world where this kind of illusion was simply not possible, and that is absolutely important.” She suggested inventive ways in which this technology could be harnessed to assess and reduce biases, including testing the effect of having subjects take the IAT as an outgroup member within the virtual reality space.

I have no idea of what is meant by 75% showed improvement and 50% showed treatment response.” What does “treatment response” mean.
It is interesting Steve Pinker wrote an article in this issue about failure to communicate. He said it is too much knowledge. I think rather it is inability to empathize. Pinker is not a clinician. Some authors use French phrases without translating. That is not a result of knowledge of French but again lack of empathy and egocentricism. They think the moon is following them.