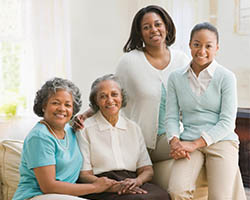 Throughout their lives, women’s risk for various mental health problems fluctuates along with reproductive changes. A special series in the September issue of Clinical Psychological Science addresses these intersecting issues directly, presenting a collection of research articles that takes a multilevel, integrative view of women’s mental health in the context of reproductive development.

“In women, epidemiological links between reproductive change and risk for psychopathology are clear,” Mendle, Eisenlohr-Moul, and Kiesner write in their introduction to the series. “Psychological symptoms continue to shift in relation to reproductive events — for example, the menstrual cycle, childbirth, menopause — across women’s lives. This occurs not just in America and other Western, industrialized nations but on all inhabited continents.”

Depression provides particularly clear evidence of these strong links. Accumulated research shows that girls are at much greater risk of depression at puberty than are boys — a relatively increased risk that then continues through adulthood, rising during the transition to menopause and falling again after menopause.

Despite this, few psychological scientists include reproductive change as an integral component of their theoretical models. This lack of integration, due in part to societal taboos regarding female reproduction and scientific uncertainty in interpreting biologically based sex differences, has significant consequences for clinical science and for women generally.

“By neglecting one of the most basic facets of women’s lives, our field has left fundamental questions unanswered,” the coeditors argue.

Indeed, researchers and clinicians do not yet have a clear understanding of which women are at greatest risk of experiencing difficulties in relation to reproductive change, nor which tools are most likely to prevent or ameliorate their difficulties.

With the aim of encouraging “a new generation of dialogue and scholarship on women and mental health,” Mendle, Eisenlohr-Moul, and Kiesner have assembled a collection of research articles that introduces readers to the complex interactions between reproductive health and mental health throughout women’s lives:

Mendle, Eisenlohr-Moul, and Kiesner note that addressing and answering core questions about the relationship between reproductive changes and mental health will require new theoretical frameworks that accommodate the complex,
multilevel interactions among biology, personal experience, and environmental factors as manifested within individuals across the entire lifespan.

“Building and testing such models is a daunting task. Yet the alternative is to consider simplistic models that ignore cross-level effects and interactions and will likely provide shallow insights and dead-end research endeavors. We believe the field is ready for this challenge,” they conclude.