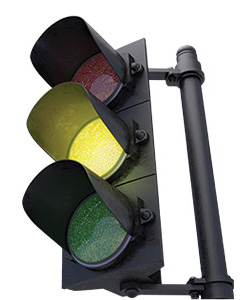 Yellow traffic lights pose one of the more dangerous obstacles that people encounter on the road. When a signal changes from green to yellow, drivers have to make quick decisions without much information. And statistics show that their decisions are often tragically poor: In 2012, for example, the National Highway Traffic Safety Administration estimated that over 2.5 million cars were involved in crashes at intersections with traffic signals, resulting in 859,000 fatalities or injuries.

A major survey by the car insurance industry found that nearly 85% of drivers could not identify the correct action to take when approaching a yellow traffic light at an intersection.

But that yellow warning light, a staple on streets and highways around the world, has become a rich source of discovery for psychological scientists who study human response time, decision making, and risk taking. These researchers are discovering how age, cognitive ability, brain chemistry, and social factors combine to affect driving safety at traffic signals. And their work is demonstrating the utility of new approaches to lowering accident rates.

As drivers approach an intersection and the light changes from green to yellow, they face a “dilemma zone” (DZ) where they have to choose between braking hard to stop before the intersection or speeding through the intersection at the risk of running a red light.

For traffic lights to operate safely, traffic engineers must take the limitations of human perception into account. For example, traffic engineers typically account for 1 second from when drivers first notice the light change to when they begin to hit the brakes.

A team of researchers led by psychological scientist Jeff Caird of the University of Calgary discovered a possible reason for this. Caird and colleagues had 77 participants in four age categories (18–24, 25–35, 55–64, and 65 and older) test out yellow lights at intersections in a driving simulator. Each participant drove through a total of 36 intersections and encountered 12 yellow lights.

The researchers found that the higher the driver’s age, the slower they tended to drive overall. While driving at a more moderate speed might seem like it would be safer, slower driving speeds actually led to problems for older drivers when they encountered yellow lights.

However, when the researchers manipulated the length of time available for drivers to stop for a yellow light, they found that older drivers were far less likely to stop at the intersection when they had the most available time — around 3.5 seconds — to make a decision. In this condition, only about 75% of the drivers older than 55 stopped, while nearly all of the younger drivers did.

Compared to their younger counterparts, seniors did not show slower perception or response times, so why were older drivers responding differently at intersections?

One explanation may be that older drivers just have a greater desire to maintain their current speed. Overall, seniors had less variation in their acceleration and braking compared to younger drivers.

But there are psychological risk factors at the other end of the age spectrum as well. For example, Temple University psychologists under the direction of APS Fellow Laurence Steinberg found evidence that for teenagers, the neurochemical effect of peer pressure influences risk taking behind the wheel.

The researchers had 40 teenagers and young adults play a driving video game while undergoing functional magnetic resonance imaging (fMRI) scans. The players had to make decisions about stopping at yellow lights and being delayed or careening through those warning signals to win a prize for completing the game within a certain time. Each participant played four rounds of the game. In half the rounds, the individual participants played alone. The other half of the time, they were told that two friends who had accompanied them to the study were watching from the next room.

Young adults showed no significant difference in risk taking between the two conditions. But the adolescents ran about 40% more yellow lights, and had 60% more crashes, when they thought their friends were watching compared to when they played alone. And the fMRI scans showed that reward-focused regions of the brain showed heightened activity when they thought their friends were observing them.

With the evidence about risk taking at intersections, psychological researchers are now seeking remedies to those problems. A recent study, for example, found that when drivers were given advance warning that a green light was about to change, they were more likely to slow down and stop at intersections.

A team of researchers led by psychological scientist Leo Gugerty of Clemson University expected that even just 1.5 seconds of advance notice before a light change would give drivers enough extra decision-making time to increase their rates of stopping at a yellow light.

In one experiment, 80 participants completed a 45-minute course in a driving simulator which included 36 high-speed intersections. Participants were divided into either a “no warning” control group or one of three “warning” groups that received an advance warning message before green lights turned yellow.

The warning groups received one of three different types of warning: a flashing sign hanging over the road, a series of lighted warning poles along the shoulder, or an onboard LCD screen that beeped and flashed a warning message.

Not only were warned drivers more likely to stop, but in all of the warning conditions drivers also slowed down more gradually, which could help prevent rear-end collisions.

“When faced with yellow traffic signal onsets in the DZ, drivers who had received advanced warnings rarely exhibited unsafe behavior, such as speeding up,” Gugerty and colleagues write in the journal Human Factors. “Instead, warned drivers exhibited greater anticipatory slowing well before the intersection and the warning, when compared with unwarned drivers. This greater slowing caused warned drivers to stop more frequently and more safely than unwarned drivers.”

Surprisingly, the study also found that light-change warnings didn’t just affect driver behavior at intersections but seemed to lead to slower, safer driving in general. This suggests that the warnings elicited a more cautious mindset among participants that lasted beyond single intersections.

Researchers are also looking at emotional primes as a way to get drivers to make safer decisions as traffic lights turn yellow.

On any car trip, visual stimuli ranging from accident scenes to billboards can evoke emotions. A driver may feel saddened when passing a roadside memorial or cheered by a billboard advertising a favorite fast-food restaurant. And new research suggests that negative stimuli (e.g., scenes that make us angry or sad) may be particularly strong deterrents to hazardous driving.

A research team in Spain set out to identify how emotion-laden stimuli on roadways affect drivers’ risk perception and decision making. They theorized that drivers who saw negative images would be less risk prone because the dire consequences would become more salient.

Led by Alberto Megías of the University of Granada’s department of experimental psychology, the scientists recruited college students to participate in a computer-simulated motorcycle ride on an urban road. In the simulation, the participants operated a motorbike at an average cruising speed of 50 km/h. In more than 240 trials, the participants saw prominently displayed billboard advertisements — designed to evoke different emotions — before they approached an intersection where a green traffic light was about to turn yellow.

Some of the virtual billboards were designed to evoke negative emotions, such as depictions of the kinds of bodily mutilations used in actual road safety campaigns. Other billboards showed romantic scenes akin to cosmetics ads, and some showed illustrations of neutral objects such as chairs or books.

Participants were told that the rider was a courier whose aim was to arrive at his or her destination as soon as possible in order to earn points. If the vehicle crashed (with, say, a car crossing the intersection), the participant would lose points.

Some participants had to decide to speed up or brake before the yellow light turned red. Others were simply tasked with being observers, and evaluated whether or not the motorcycle operator had time to cross the intersection before the light turned red.

Megías and his team found that riders sped up to cross the yellow traffic light in more than half the trials, but were less likely to do so if they had just seen a negative billboard. Those participants who did speed up (or who said there was time to cross) when approaching a yellow light made their decision faster after seeing negative ads compared to participants seeing positive or neutral stimuli.

A possible explanation for that quicker response time, the researchers wrote in the journal Transportation Research F: Traffic Psychology and Behaviour, is that participants “had the belief that speeding up earlier could avoid a possible crash in the intersection.”

Additionally, evaluators who saw the negative ads were less likely to believe there was adequate time to cross the intersection against a yellow light — and were overall faster in making a judgment — compared to those exposed to positive or neutral ads.

Megías and his collaborators acknowledge prior research showing that emotional stimuli on roadways can distract drivers. But they say their results suggest that billboards promoting road safety should be located around tollgates, gas stations, and other spots that demand less of the drivers’ urgent attention.

Overall, tracking behavior at yellow traffic lights, whether in a simulator or on an actual roadway, is yielding new insights not only into human cognition, but also into the most effective ways to design safe traffic control systems.

This is a pretty good article to understand human behaviour at traffic lights when it is Yellow.

Alexandra Michel is a science writer at APS. She can be contacted at amichel@psychologicalscience.org.