Research published in APS’s newest journal, Clinical Psychological Science, is getting big attention — potentially from millions of people — on social media. The study, conducted by Jessica Tracy and Daniel Randles of the University of British Columbia, focused on whether the distinction between shame and guilt might play an important role in predicting outcomes for recovering alcoholics. 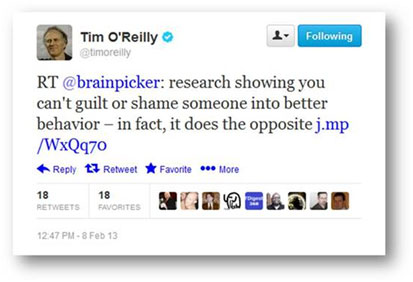 Even though public shaming has long been viewed as a way to encourage people to amend their ways, the Tracy and Randles study showed that alcoholics who displayed body language associated with shame (that is, feeling like a bad person rather than feeling bad about a particular action) predicted poorer physical health, more severe drinking relapses, and more distressing psychiatric symptoms four months later.

The results were reported in several popular media outlets, including LiveScience, The Huffington Post, and the Toronto Star.  A TIME article on the study was tweeted by blogger Maria Popova, who has 307,245 Twitter followers — and retweeted by publishing icon Tim O’Reilly, CEO of O’Reilly Media Inc., to his more than 1.6 million Twitter followers.

This isn’t surprising as Bradshaw (as cited by Wilson, 1991) pretty much let us know how shame affects every part of our lives.